The rising pop star on the premiere of "What Do U Like."

Jesse Saint John, your favorite pop star's pop star, stays plenty busy writing chart-topping tunes for everyone from Britney and Rita Ora to Kim Petras and The Neighbourhood. But the shapeshifting artist, who turns 28 today has also been tooling away at his own musical projects, namely the upcoming EP Don't Stop Dancing, Life Gets Sad.

Having previously released "Move" and "Fake It," both irresistible singles highlighting Saint John's openness with queer identity and relationships, he drops "What Do U Like" today. The song is his most delightfully nuanced offering yet, capitalizing on Saint John's uncanny ability to tease out the emotional complexities often related to sensual expression, best exemplified in double entendre-laden lyrics like "Honey dripping from your lip, I wanna catch it for you." As such, Saint John renders himself of service to his partner of choice in the song, and smartly pairs it with unusual but euphoric production meant for the dance floor.

PAPER caught up with the aesthetically-defined artist to talk about emotional availability, doing what he likes, and his work on the new Kim Petras Halloween-themed mixtape, Turn Off the Light, Vol. 1. Check out the exclusive premiere of "What Do U Like" below, and read on.

So, the new project is called Don't Stop Dancing, Life Gets Sad, and I wanted to know what was behind that title. What does this collection of songs represent for you?

Basically, this whole little project is about being so sad, but hiding it. I was in this really depressed place, but I couldn't cry for some reason, so I was like "what is this?" And I think I was, over the past two years, coming up with ways to distract myself so that I just didn't feel anything, and I would rather feel nothing than feel sad. I just was doing a bunch of stuff and stacking up projects on top of one another, and working my ass off, and going to social events, and shopping, and doing everything—boys, and all of that stuff. I didn't even know I was sad until I slowed down a bit, and it was just the most cathartic thing because long story short, I had to move out my apartment and move it into another apartment, so it made me take days off from writing and working and forced me to face everything that I was feeling before. I suffer from depression, so it was very much like, "Okay, what triggered my depression, how can I avoid it, what should I be taking," it was just that. Also, this whole project is like an 80's, lo-fi, new romantic sexier dance pop. It just felt like there were these melancholy kind of dance songs anyways, so it was like if the title fits in that, it also fits in my life because that's the place I've been in. 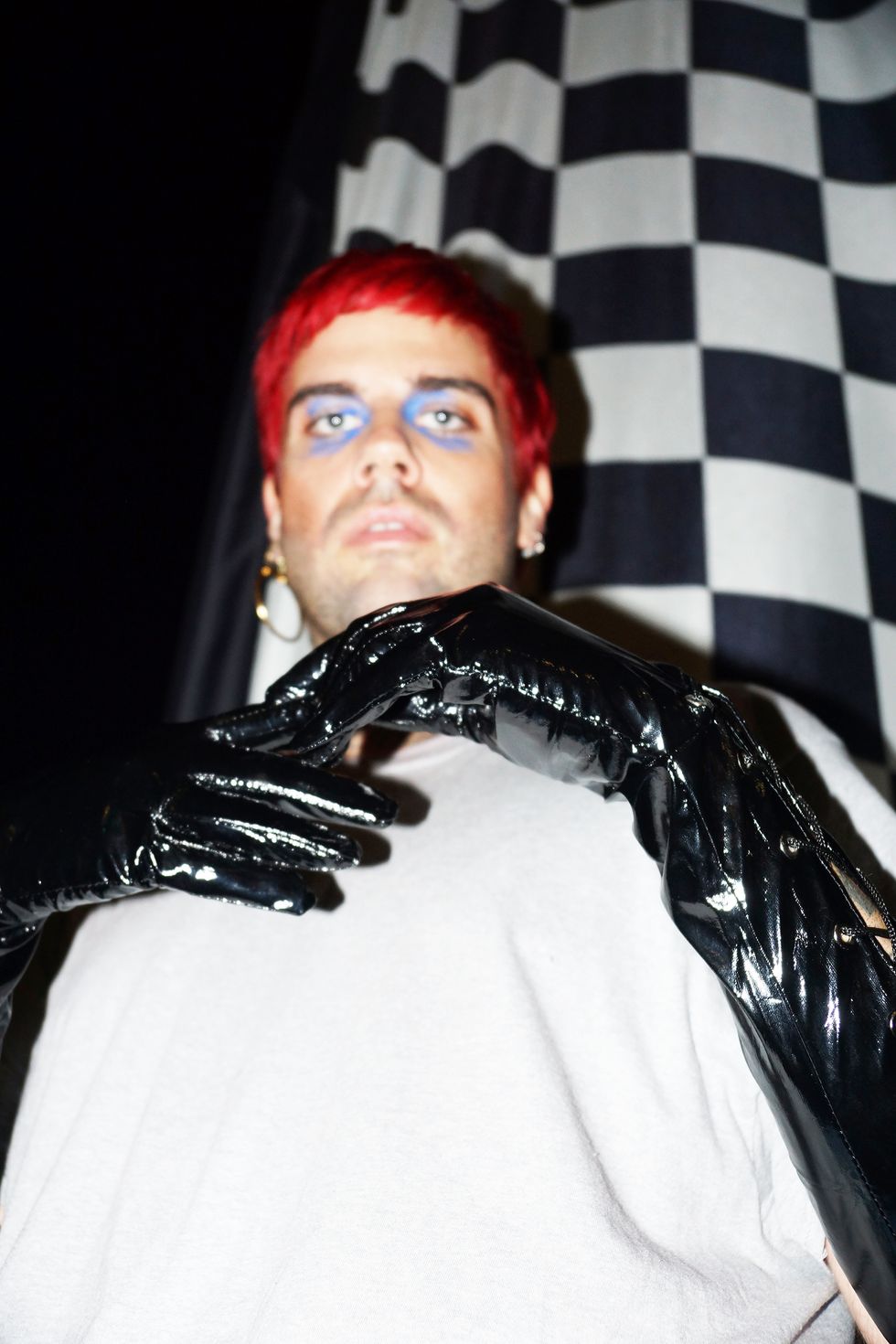 So, you've said previously that this song is your "favorite thing ever.'" Why do you feel that way?

Literally, it's my favorite thing I've ever done. I just literally walked out that day – first of all, I did whole topline by myself. Usually in writing sessions you have a co-writer because that's just standard, but for this particular thing, I worked with Lars [Stalfors], who I worked with on The Neighbourhood album, who's an incredible producer. I just was in the studio, and he played me the chorus and I was like "hand me the mic, please." So, I just got on the mic and did that whole melody and most of those lyrics just in one take – it flew out of me. Normally, that's not necessarily good, it's just whatever comes out first, and when I walked out that day I just couldn't stop singing it . I was like "I think I just did something really good." I couldn't stop listening back to it, I was like "wow, I need that project right now."

This song is like a dance track with a real emotional core. Some of the lyrics include: "honey dripping from your lip, can't wait to catch it," and "tell me where it hurts, I want to make it better."

Totally, and pleasing someone else, giving yourself over to that, it can be like another form of distracting yourself. You're trying to please somebody else, you're like "please, please, please like me." It's this constant search for validation and affection and that's a way to try and stop facing what's going on internally. Part of it is boys, and just the [idea that the] search to feed that connection with somebody else is distracting you from fully realizing your connection with yourself. But yeah, it's like a dance of doing certain things to please your man, and everybody's saying on the single art, it looks like I'm even bottoming, so there's that. That's the image I wanted to evoke. In my art, I bottom. (Laughs.) 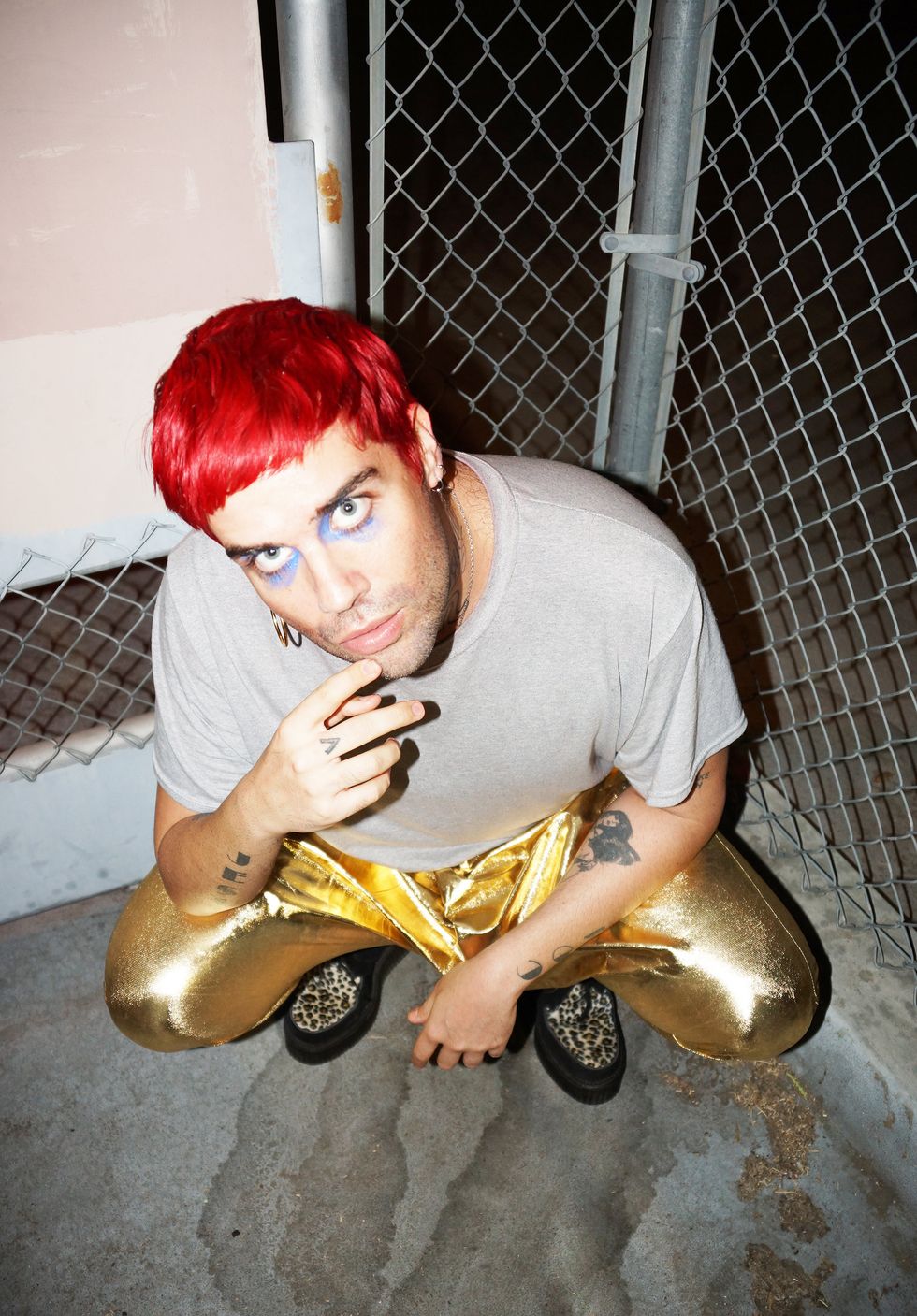 So, in the song, if you're giving yourself over to this lover, whether metaphorical or real, and you're asking, "what do you like?" I wanted to flip the question back to you, and ask what do you like these days?

In life, or in a partner?

In life, I like drawing, and I actually started out as a visual artist. I always thought that would be my job, and then I accidentally started writing four years ago and then that became my career. But visual art is a huge passion for me, and I always thought that's what I would end up doing, so getting back into that has been really fun. In fact, for the promo art for this single, I made a watercolor self-portrait on the day I shot the single art. 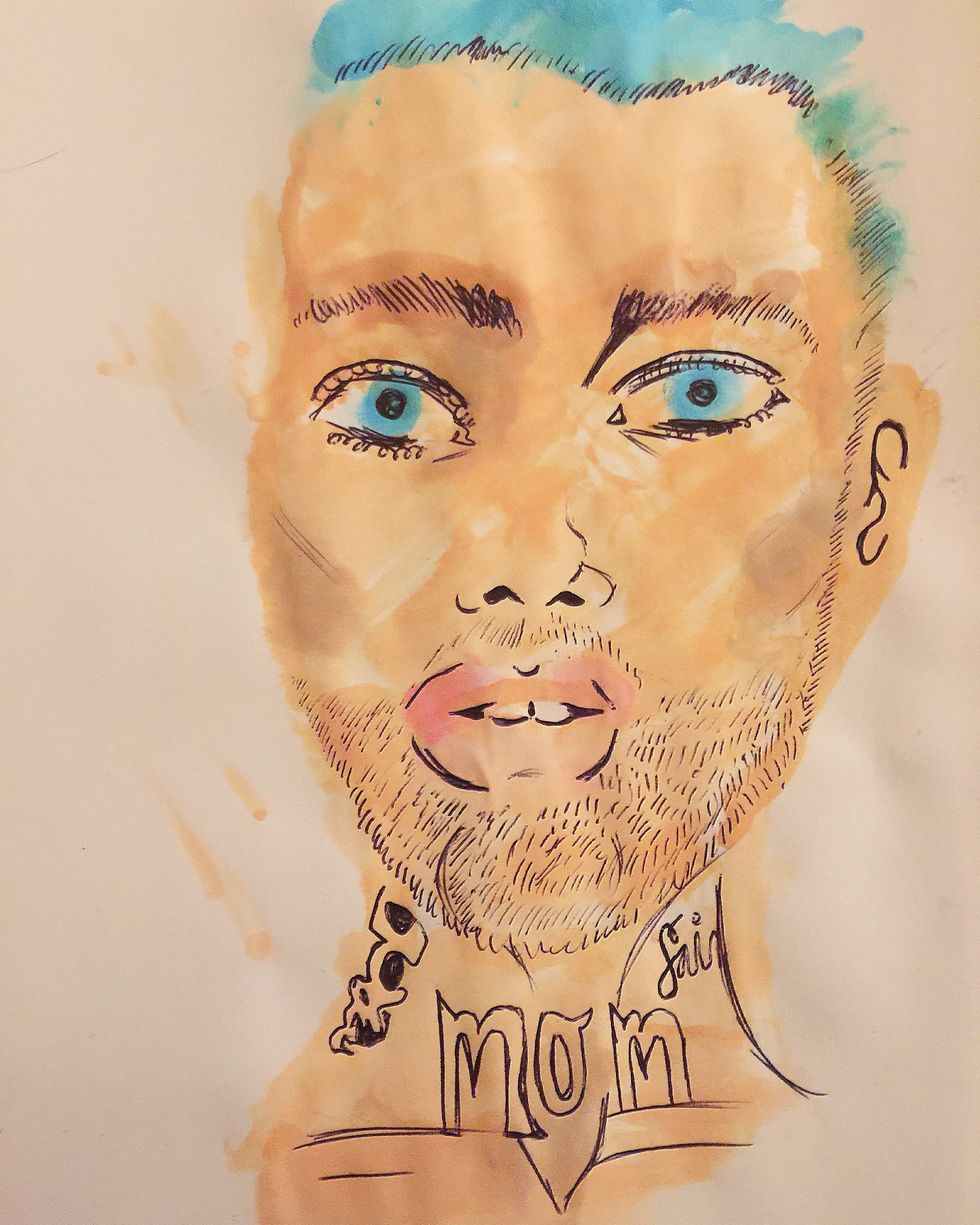 You recently worked with Kim Petras on her new Halloween mixtape. What was that like?

It was just the most fun ever, because when Kim [Petras] and I first became friends a year ago, we connected on horror movies because we both love all of them—even bad ones. It's a very LGBTQ thing, the horror genre. I think because it kind of taps into our trauma and fear of coming out. But yeah, we always just connected on horror films, and talk about that stuff. Finally, it was just like "we should do this spooky little gay monster type of EP."

It sounds like you guys had a blast making it, and I heard you all went to Hawaii to make it.

It didn't feel like the right setting at first, but we chose to go there. That said, there were definitely spooky things around. There were spooky energies involved, but it was the most beautiful place in the world. We were on the ocean, we were just going to the beach every day, drinking coconuts and then we were like "okay, let's talk about ghosts and witches."

In many ways, it feels like a sonic reinvention for Kim. But it's a fun one that doesn't feel like it's taking itself too seriously.

Yeah. One of my favorite things with Lady Gaga is, and I hate comparisons, but I think about how I listen to her songs and die laughing. When she's like "ew" and I'm like "how does she get away with this!" It's pure camp, but that's what makes her such an amazing artist, and I just love her so much. I think that it's cool to not take yourself too seriously. That's the same thing I want to do in my music—the weird noises, strange vocal sex and stuff like that. I just don't ever want to take my self too seriously because then you end up homogenizing yourself. It happens too much to these artists who are like, "Oh, I'm embarrassed," and "I wouldn't say that." It's like cool, if you want to just blend into the pack, why did you decide to be an artist in the first place? 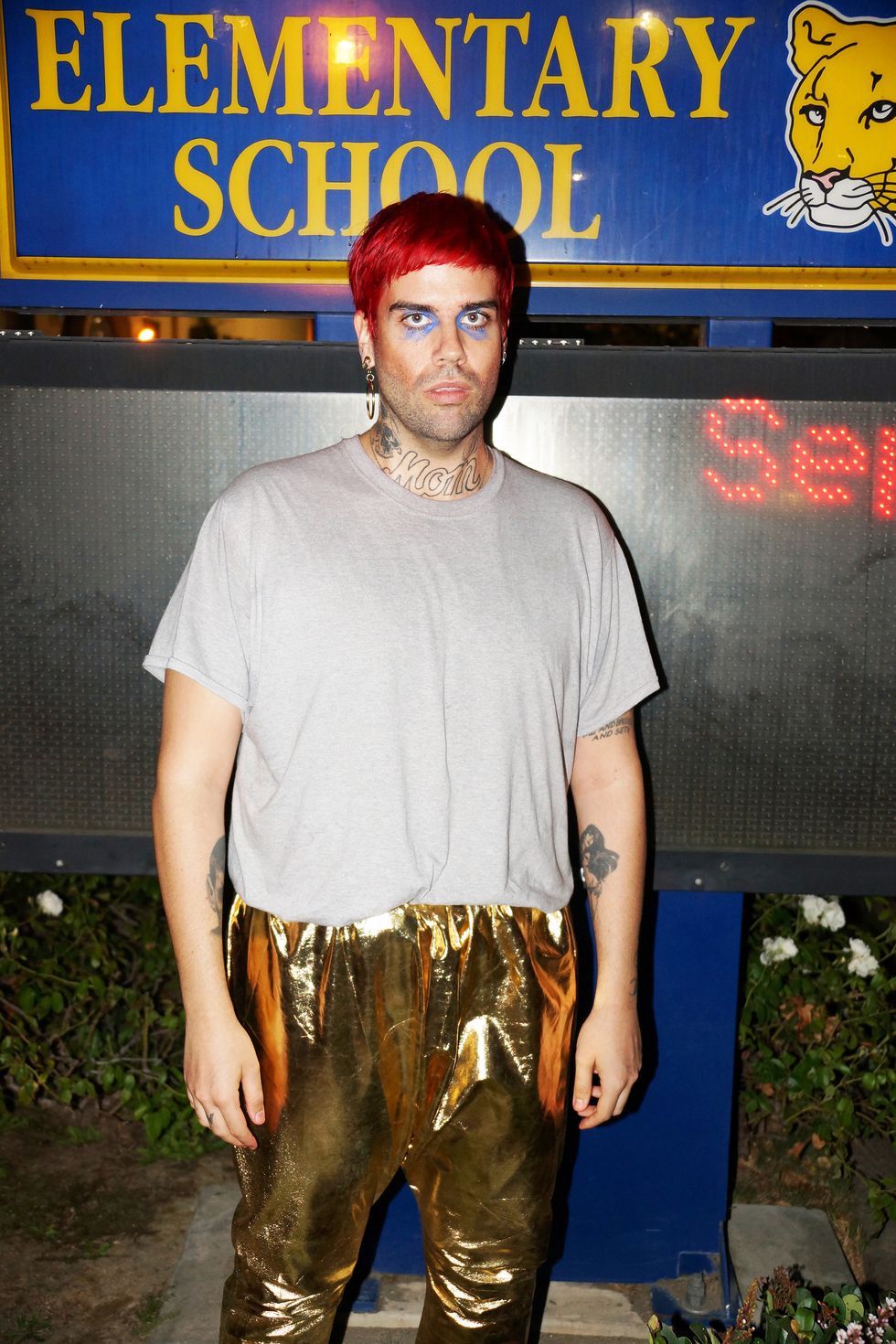 That's so true, and also if you're not having fun, then what's the point, right?

Literally we're in the most fun industry. In theory of course, but as far as what we create—art and music—what could be more fun than that? It's everything we did before we got paid for it but now we made it our little job.

The last thing I wanted to ask was how your professional songwriting experience influenced what you write for yourself. Does it play a role in it at all, do you have a separation of church and state, or what?

Right, you have to love it.

Exactly, you have to be proud of it. Usually when you're writing for somebody else, if they're asking you, it's for a reason: you're bringing something to the table that they want from you. It's not like you're completely lobotomizing yourself to become them; they want some piece of you. I'm usually writing for Disney queens and pop stars, so with my artist project, the logic is the same: make the best song that you can.