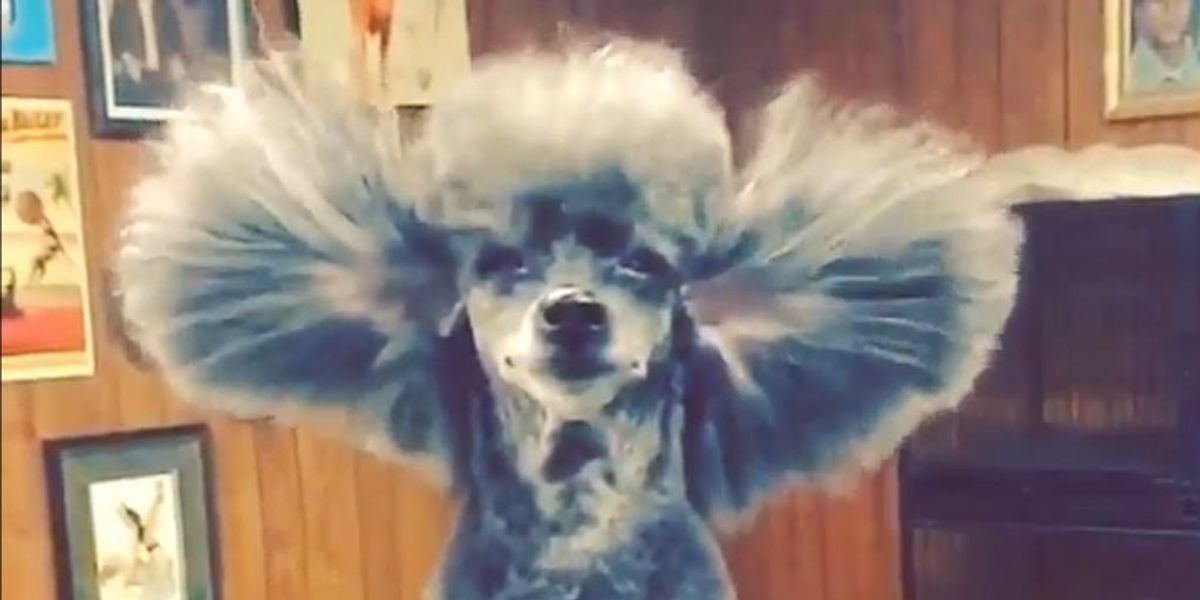 
There are few things on the Internet that garner more attention and good-will than soft, fuzzy animals. Certainly, some pet owners have learned how to capitalize on their pets, turning them into social media superstars. Los Angeles dog groomer Jess Rona has a slightly different approach, turning her parade of four-legged clients into slow-mo music video stars with just a blow-dryer. Her professional Instagram is chock full of these bite-sized sublime moments, as perfectly-trimmed pups emote for the camera, garnering fans from Marnie the dog to musicians Tegan and Sara, who then decided to have Rona direct some puppies in a recent video. We talked to Rona about choosing the perfect soundtracks, the best dog accounts to follow, and what kind of pup makes for good footage (it's all in the ears).


You've been working as a groomer for quite a while. How and when did you get the idea to start making your slow-motion dog vids? Did you expect them to take off online, or was it to entertain yourself and friends?

I was blow drying a Pekingese named Noodle and her ears flew up in the air. It was so cute--I grabbed my phone/camera and filmed it and put it on my personal Instagram. Then I got an iPhone 6 that has the slo-mo video feature, added music, and started making little music videos.

How do you select which music to use: Is it based on the video? The personality of the dog? Just how you're feeling at the moment?

All of the above! I listen to music while I work. Sometimes I'll be jamming to an album and a song will hit me and I'll know I want to us it in a video. Sometimes I'll see footage of a video I take of a dog and know I need the music to be a certain vibe or feeling. I have a long list of songs I want to use, but I'm always on the hunt for new music.

Do you have dogs who are more camera ready, or more into the whole thing than others? Are there dog breeds that make for better videos than others?

There are definitely some pups that don't like to sit there while I blow wind on them and film it (that's the weirdest sentence). But there are some that don't mind. I feel bad when people ask me to make videos and I can't do it cause their pup is over it. Since it's in slow motion, all it takes is a few seconds of footage to get a good video.

What was the moment you realized your account had taken off—like, was there a video that got a certain number of views? Or did you reach a certain follower count? Did someone famous/notable follow or message you?

I met Marnie the dog ('s owner Shirley) at a party and I didn't know who she was. Everyone there was saying "You guys gotta meet!" and "You gotta go to Jess for grooming!" So a few days later I groomed Marnie, and she posted it on her Instagram and I instantly got like 2000-plus followers. Anytime I get a wave of followers, they tag their friends, who tag their friends and it just kinda went nuts after that.

Did achieving a level of Internet fame change anything about the way you created/posted your videos, or engaged with your following?

Totally. I sometimes feel guilty if I don't post something for a few days. I have such a need to make sure everyone is happy now vs. just doing it for fun. I try to spice up the genre of music I choose. My go-to music has been '60s, '70s and sleepy indie folky stuff, but I know not everyone is as into Margo Guryan as I am. So I'll splash in some pop or other stuff. I try to make sure I stay true to what I want to do.

Recently, you collaborated with Tegan and Sara for their video for "100x." How did that come about? Did they approach you—were they fans of your Instagram?

It is bananas. I met Sara at a party and I geeked out and told her what a fan I was. We started talking and in the conversation I showed her my Instagram. The next day she posted something about it on her Instagram telling everyone to follow it which was so cool. We hung out a few times and one day she asked if I would be open to making a video for them. It was the most fun project I have ever worked on. Now all I want to do is make music videos.

Did you cast the dogs for the video? How'd you decide who was ready for stardom?

Yes! I chose dogs who don't mind a little wind blowing on them and who would be comfortable with a lot of people. Also their owners are amazing. I've used the same pups for a few projects.

What's in the future for you? More music videos/full-length videos?

I would love to make more music videos and direct in general. I've been doing comedy for years, and that's what I always wanted to do (and am still pursuing). Directing [was] something I never knew I loved until I started doing it. I am working on a project for The Standard Hotel right now to promote their new "no fees" policy for pets of hotel guests and I'm working on a book of glorious wind-blown dogs that will hopefully be done by the end of the year.

What is your ideal slo-mo dog video? Do you have a favorite you've already made, or is there a type of breed you'd really like to shoot?

Oooh! I really love my Beyonce queen Stella, the black mini poodle. That's one of my favorite videos I've done. Any dog that has big ears that fly up in the air makes me happy.

What are your favorite accounts to follow and why?

I just got into SnapChat. My favorite celebrity to follow is Kate Hudson. She'll make funny videos with googley eye emojis on bread baskets. The carb struggle is real, it's alive, and I get her.

What's the strangest thing you've ever seen online (that you're willing to share with us!)? Or is there a cool, weird Internet K-hole you've wandered down?

Wow. I haven't heard the term K-hole since '03 and I definitely shouldn't get into those stories. Let's keep it professional. I've spent way too much time on @foodandcuisines, @stylefashionvideos, @nikkietutorials on Instagram. And I'll stalk new friends to make sure they're not insane.

You deal with one of the Internet's fuzziest corners (dog videos!), but do you still get trolls, or bad commenters? How do you handle them when/if they appear?

I don't really get negative comments, but sometimes I'll get someone aggressively telling me what songs to use which is weird and annoying. Once I pissed off a new client because I didn't make a video of her dog. Like, she told me off via text. Thank goodness I was at a full moon guided meditation that night.