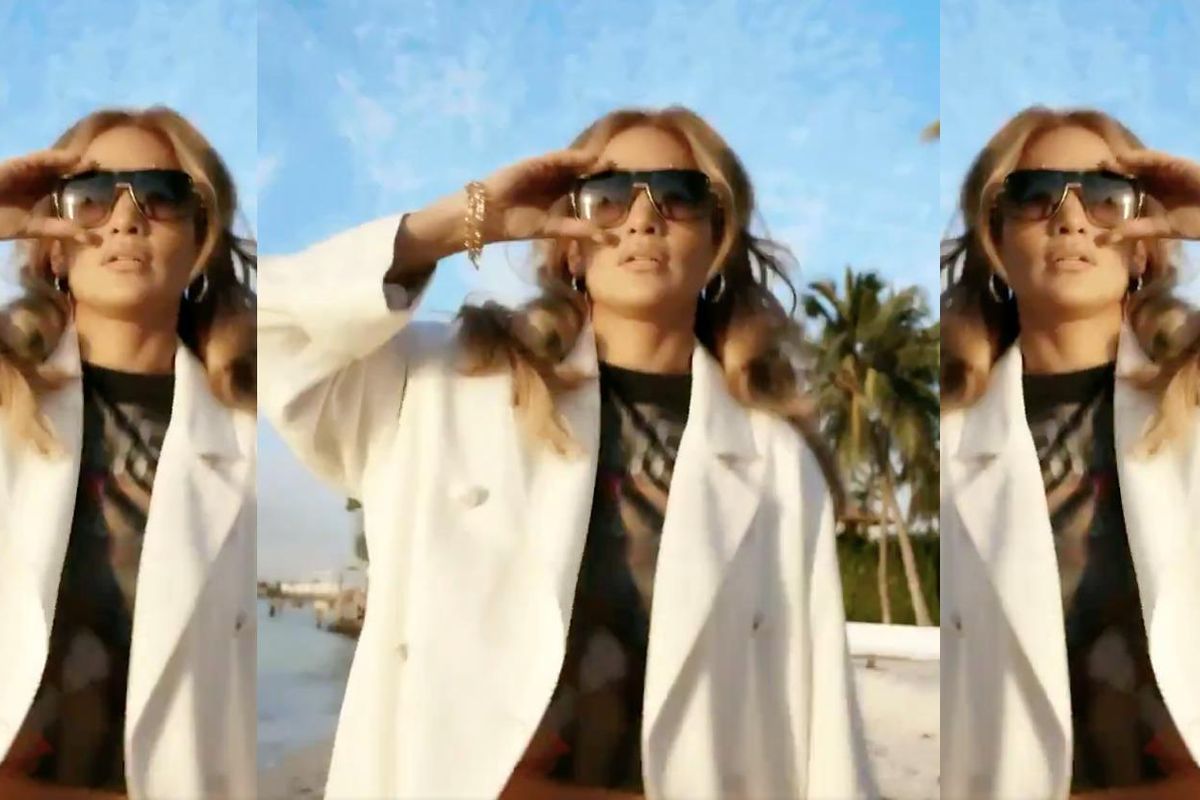 Everybody wants to create a viral challenge — ideally, a successful one. But nobody loves them more than celebrities. Famouses. Influencers. People who'd like to infiltrate your daily life with something to sell. Or flaunt. In fact, it's their favorite way to make things that probably wouldn't be popular ever have a chance of entering your newsfeed at all.

This is precisely the dilemma Jennifer Lopez found herself in over the weekend, when she wanted to celebrate the 20th anniversary of her single, "Love Don't Cost a Thing," with something called the #LoveDontCostAThingChallenge.

On Twitter, J.Lo accompanied the challenge announcement with a video of her walking along a beach, removing her outfit piece by piece and tossing each item to the side. The clip closes with her teasing a topless shot that we never end up getting. "Can't wait to see your renditions," J.Lo tweeted. I'm sorry, what?

Fans were immediately confused about J.Lo's directive, mostly because love in fact costs a shit ton ("The hashtag is a lie," one person noted). What exactly is this challenge and where do we start? It's not that J.Lo's audience doesn't want to engage (there's literally nothing else to do right now), it's just that the #LoveDontCostAThingChallenge doesn't make any sense. At all.

Is this about the location? Should we film our "rendition" on a gorgeous private island — one we'd somehow visit during a pandemic in the middle of winter? ("I live in the Midwest, it's cold as fuck," someone tweeted.) Or maybe it's about her stripping down, although comedian Kathy Griffin noted it's not much different than "what most people do before they get in the shower."

I’m a little confused by the particulars of this challenge. Isn’t this a version of what most people do before they… https://t.co/as1T0lqZ2q
— Kathy Griffin (@Kathy Griffin)1611533963.0

Do we wear a t-shirt with our own image printed on it? Do we fake having riches we'd willingly throw to the ground? Do we pretend to own a single white coat that hasn't been stained and tortured by the NYC subway? Is this all about attempting to look as hot and well-rested as J.Lo? Help us, Jenny! We want to understand!

The negative response has been, arguably, more viral than anything the challenge itself would've achieved. (Maybe this was the goal all along.) Considering the criticism is taking place online, though, in a time when we scroll more miles in a day than we walk, J.Lo is being unfairly ridiculed at unnecessary volumes. After all, it's just a challenge. There will be many, many more to come — probably even from J.Lo herself.

Jennifer thank you for the invitation and I would love to join but it is cold outside and I fear that if I haphazar… https://t.co/9PPXuy0HKk
— Hanif Abdurraqib (@Hanif Abdurraqib)1611551937.0

How soon we selfishly forget that J.Lo delivered one of the most surprising inauguration performances to date just last week! We didn't deserve that then and we most definitely don't deserve it now. Who else could somehow weave her 1999 single, "Let's Get Loud," into a subdued, melodic rendition of "This Land Is Your Land," alongside bits of "America the Beautiful" and the Pledge of Allegiance in Spanish?

So while it seems the #LoveDontCostAThingChallenge won't be going viral as J.Lo originally intended, we can still celebrate her 20-year-old track in a much more classic way: on YouTube, from our beds, with absolutely no riches in sight.