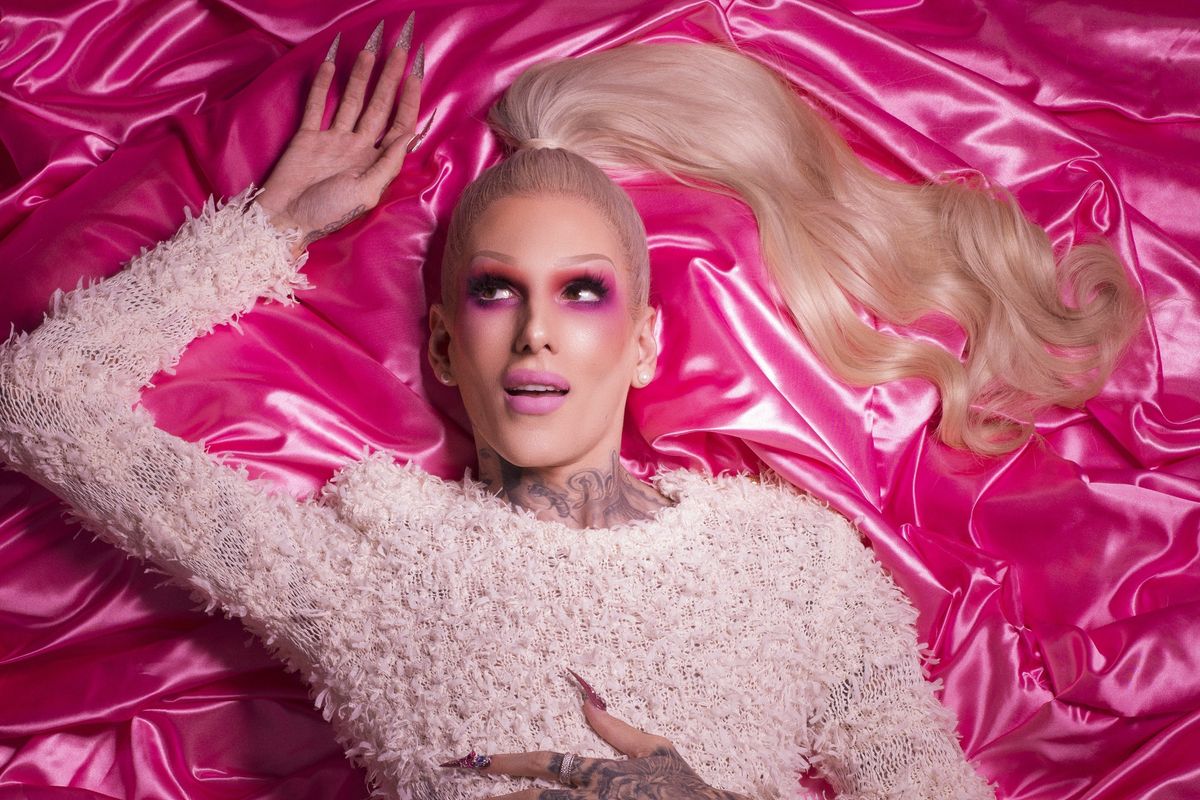 Jeffree Star on His Morphe Line and Building a Beauty Empire

Jeffree Star, the #20NineScene icon of our dreams, has announced his latest line of beauty products bearing his name. Star, of Jeffree Star Cosmetics, which is perhaps best known for its range of candy-colored lip kits, has inked a partnership with beauty retailer Morphe.

Together, they will launch Star's first-ever collection of brushes using natural and synthetic bristles as well as soft sponges — all specifically designed for impactful highlighting and contouring. The Jeffree Star Brush Collection and the Jeffree Star Beauty Sponge Trio, created with luxe packaging (a sheer pink makeup bag and beveled brush handles are among the trimmings), is also cost-effective: sponges are $16 and brushes are $49. The whole set is officially available February 5 in Morphe stores and online.

When we caught up with the beauty mogul — whose impressive YouTube following boasts more than 12 million subscribers and whose cosmetics company has pulled in hundreds of millions of dollars in revenue since its 2014 e-commerce launch — he was at his home in Los Angeles hanging with his six Pomeranians. Not a bad way for Star to spend his downtime, of which he likely has little-of considering he is entirely self-made and has gone from "trailer trash to millionaire," as he tells PAPER.

Star opens up about his choice to partner with Morphe, the ins and outs of running his beauty empire mostly on his own, and how he hopes to stay a step ahead of the competition. (Here's lookin' at you, Kylie Jenner).

This launch with Morphe is your first with another big brand outside of your own. How did the partnership come about?

First off, I think that my brand is more of a higher price point, so I really wanted to team up with someone who I could cater to a whole different audience as well, and you know my brand is also carried in their stores, right, so I thought it would be the perfect partnership. I've known them for years, so when I first started to dive into the YouTube realm, my friend LipstickNick, who I think is the global director of artistry [at Morphe]. She's been one of my really close friends for years now and she introduced me to [Morphe owners] Chris and Linda years ago. I held a makeup class in their store in 2014 or 2015 with like, 30 people in it. They always believed in me from the beginning, so I thought they'd be the perfect partner.

How did you go about creating the product itself? They come in different shapes that focus on different features of the face.

I think when I see brush sets, people make too many brushes. It's not that complicated, right? So I thought, you know what, let me make a smaller set that's just for face and eye. You can literally do an eye look with two brushes, you can do your highlight, your contour, your foundation, everything. It's seven brushes. The aesthetic is really cool, it's giving you a pink icicle, diamond shape kind of vibe. All the brush heads I got to custom create with Morphe which was really cool, so some of them are natural, some of them are synthetic, and you can really do a full look with the full set.

Related | Before She Was Famous, Nicki Minaj Rapped on This Jeffree Star Song

That definitely makes the process of beating one's face a lot less complicated.

Yeah, it's a little more user-friendly. Especially in the YouTube realm, I feel like some of these people, they're trained in their bedroom and sometimes they'll use way too many things. They're not necessarily misguiding the public, they're just maybe letting people know wrong information sometimes, that you don't need 50 brushes. Sometimes less is more and really goes a long way.

As someone who has taught people how to do makeup for years, what is something you think that people actually get wrong about highlighting, contouring, and blending?

I think a lot of people will look at someone else's tutorial and do it exactly like that. It may be common sense to note that we all have a different eye shape and we all have a different face shape, but if you're a beginner and you're watching someone do — let's say it's a J. Lo inspired look — they're going to contour for their face, and I just see a lot of people mimicking what others are doing, and it doesn't suit their look, or their features. They kind of have to learn their features, but the cool thing about the brush set is that you can highlight, sculpt, and create. We also have a three-sponge, little beauty kit coming as well, so you can really use everything for creams and everything with powders for both. So you can utilize the brushes and the sponges for a full look... the JS2 brush, you can use it for powder, anything for baking, for taking away, for adding, for multiple parts of your face. She's a utilizer.

What's something else you think people can gain from this kit?

Well, I've been getting so many requests from people to do brushes, so to be able to do them at a more affordable price where so many people can grab them is really exciting for me. I think it's cool because if you've never tried Jeffree Star Cosmetics, you know Morphe has such a wide audience. So it's cool to be able to open up me to a different audience that has maybe never tried me before. So to be able to get the Morphe price point with luxury packaging and a really cool display is exciting, I think, for the both of us. They have such a reach with retail that I don't have — I'm the e-commerce queen, but they have a whole other lane. So I definitely understand that, and I want to grow with them. They're opening up so many retail stores, I think another 40 this year, so it's like they're a force to be reckoned with. I'm happy to be a part of it. Watch out, girl! Ulta and Morphe are coming, hard.

Do you have any favorite beauty looks that you've created over the years?

I think such an iconic one, because I did it for years was my pink eyebrow, black and gray shimmery-smokey eye. I did that for years. It was full Beauty Killer era. Pink eyebrow. Now, in the last year I've rocked no brows. I think that's kind of my new favorite look.

You don't have brows?

Yeah, it's funny, I haven't had actual hair though since 10th grade, so I might want to try to grow them out for a video or something, but it might take a few weeks.

"I've made a lot of mistakes, I've learned a lot and grown a lot, and I'm ready to take over MAC."

Did you get your brow hair lasered off?

No, I've just been shaving them literally every other day for over ten years.

What inspired you to go with just a total no-brow look?

I think just looking at so many cool '80s bands and seeing all the guys in makeup, I was like, "I really want more room to create." So my natural brow was really low, so I was like, "You know what, I'm just going to shave them." My mom was like, "Oh my god. It's OK if you're doing good in school, you can look however you want." I took that to MACH3 and I never turned back.

There are several ways a beauty mogul is made, and some are more hands-on than others. Could you talk about how involved you are just in creating and sustaining your product offering?

You know what's crazy? I think that when you see success online or you see someone's perception of what they put out there, so many people think I have hundreds of people working for me. My team is so small, and literally before this call I was finishing naming all of my summer eye shadow names, and to this day I do everything myself as far as creative. It's definitely tasking, juggling YouTube and life and family and love and traveling, but I just couldn't imagine hiring someone to name things for me or create. I'm not at that level. We have a huge shipping facility, we have great employees, but it's a smaller team I think than a lot of people envision, which is what I want. Where possible, I want to keep my brand very family-owned, still indie, but a powerhouse.

Beauty is so personal. Sometimes a large team can remove its personal touch.

I'm saying people don't feel like they're in touch with the person who owns the brand!

Yes. All shade aside, that's what a lot of people think of Kylie lately. Her Valentine's collection is about to launch, girl, I ain't heard no one talking about it. You know, it's very removed. "Hey, I'll pop up and promote it when there's something to launch, but besides that, I don't care." It's just not special.

Did you teach yourself how to do all of this, just by watching other people and realizing, "OK, this is what I won't be doing"?

Yes, 100%. When I quit music, I had to teach myself everything from the ground up. There's no handbook for "You're Going to be a Makeup CEO." I never knew it was going to get this big this quickly, honestly. When I launched three lipstick shades, I had no idea it was going to be this insane. So I've made a lot of mistakes, I've learned a lot and grown a lot, and I'm ready to take over MAC.

MAC takeover pending, anything else from Morphe that you're kind of quietly working on?

Yeah, after the brushes I think it'd be cool to say that I am doing a much-anticipated part two of the Blood Sugar eyeshadow palette, which was my biggest hit to date. That comes out in March, and then in April I'll be launching the long-anticipated concealers with over 30 shades. I'm excited to finally dive into some skin products, people have been waiting, so I'm excited.

Would you ever want to have your own individual storefront?

Honestly, I've already been toying with the idea of just opening one for fun and have that be the flagship store in LA or Michigan, that's where we both live so me and Nate are bicoastal. So Grand Rapids and Calabasas. Wouldn't that be sickening?