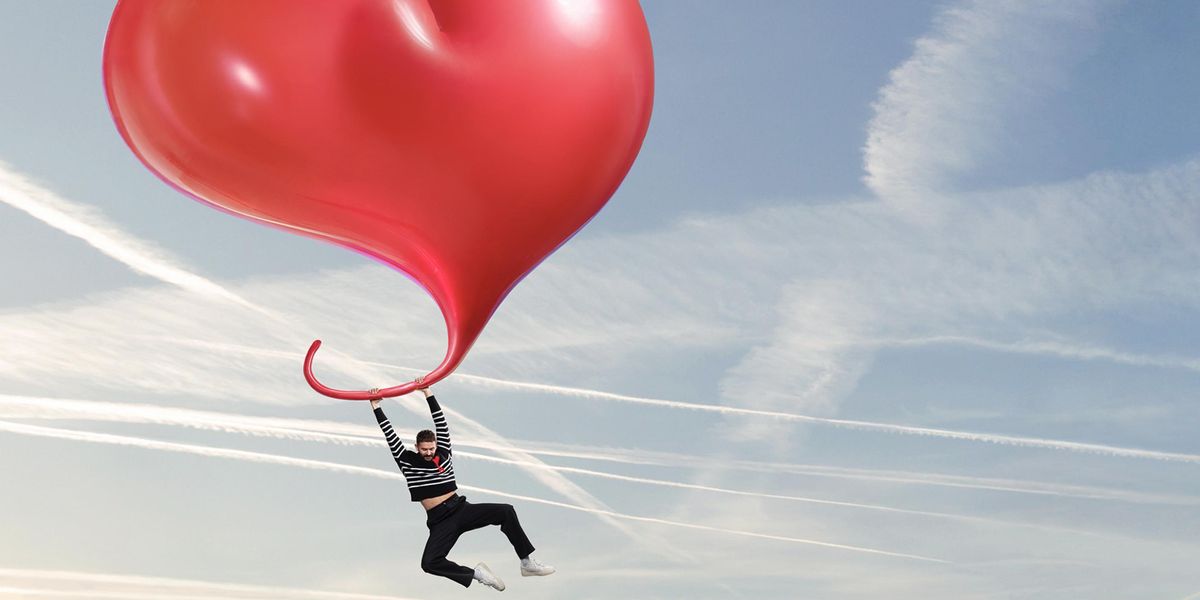 It's been 10 years already since AMI first emerged on the fashion scene, where they quickly shook up the menswear landscape with their laid-back Parisian aesthetic and elevated approach to contemporary dressing.

Perhaps the most recognizable element in the brand's universe is its Ami de Coeur logo — a (usually red) capital letter "A" topped off with a heart that's been featured mainly on their cozy knits and oversized pullovers. It was first established in 2017 and has appeared as its own capsule twice a year ever since. (Ami de Coeur translates to friend of the heart.)

The De Coeur range proved to be so popular and successful (thanks to word of mouth) that the brand never felt the need to dedicate an entire campaign to the ubiquitous symbol, until now that is. AMI's creative director and founder Alexandre Mattiussi felt that the ten-year mark was the perfect time to create and conceptualize his first Ami de Coeur campaign, and he enlisted none other than legendary photographer Jean-Paul Goude (yes, the guy behind our Kim K #BreakTheInternet cover) to shoot it.

The images are a playful and surreal interpretation of the famous logo, with the Eiffel Tower representing the "A" in one image and Mattiussi flying over Paris holding a giant heart-shaped balloon in the other. According to the brand, the campaign is a "celebration of a French way of life and sense of aesthetics" and a "declaration of love to AMI's hometown of Paris."

Ahead of the next Ami de Coeur capsule, which launches in stores May 1st and will include sweatshirts, pants and t-shirts new various colors, check out a pair of Q&A's with Mattiussi and Goude, below, to learn more about how the logo first got started and how the two creatives collaborated together for this new project.

What does the Ami de Coeur represent to you and how did you come with the idea?

The Ami de Coeur is more than a logo, it is a symbol that represents friendship, joy and authenticity, the founding values of AMI. It all started back in 2017. AMI was 6 years old at the time, but we still didn't have any logo, I didn't feel like we needed one. One day I was in a meeting with my team, doing some sketches as we discussed, and signing them in the same way I've signed all my notes ever since I was I was a kid: my initial, the A, crowned with a heart. We all agreed on taking that "signature" further and that is how the Ami de Coeur was born.

Why highlight the Ami de Coeur in a campaign?

The Ami de Coeur has rarely been highlighted in our campaigns before. The staples adorned with it have worked very well since their launch thanks to "word of mouth" and I didn't feel that it was necessary to further push their presence. Yet as our Ami de Coeur became an essential part of our international success and given the values it embodies, I strongly believe that it is the time to give it an even more significant place, and the best way to start is with a beautiful campaign.

Why did you choose Jean-Paul Goude for this special campaign?

I love Jean-Paul Goude's universe: colorful, playful and very Parisian. I thought that his way of seeing and portraying fashion would fit very well with the Ami de Coeur's philosophy. I had the feeling that he would somehow push further my own ideas and that together we would be able to envision something witty yet modern. Now that I see the result, I know that I couldn't have chosen a better partner for this first Ami de Coeur campaign.

How has Jean-Paul Goude's work inspired you in the past?

I have to say that his work has inspired me for a very long time now. Even as a teenager during the 90's, when I started to get interested in fashion, I loved the campaigns he created with fashion houses and other commercial but iconic brands. Jean-Paul Goude's art and universe is undeniably a part of the imaginary that encouraged me to become a designer, and you can see glimpses of this inspiration in some of AMI's visuals from the early days until now.

What is the message that you wanted to express through this campaign?

For me it was important to share a positive message, one of hope, friendship and kindness. At the same time, I wanted to display Paris, AMI's hometown and a source of inspiration ever since I created the brand. The campaign features Paris' soul: its people, as well as some of my favorite landmarks such as the Eiffel Tower. The overall mood is joyful and full of high energy, just what we all need right now.

What did you like the most about the Ami de Coeur universe when you were first approached to work on this project with AMI?

Precisely that is it a genuine universe, a community of friends! There is a fun and joyous atmosphere around the Ami de Coeur, that attracted me from the start. And it has this intrinsically, timeless Parisian spirit, one that is both celebratory and welcoming.

How was your first encounter with Alexandre Mattiussi?

A couple of months ago, during the height of the pandemic, Alexandre Mattiussi came to visit. I found him not only charming but funny, serious, sensitive, enthusiastic; it was love at first sight!

What is the concept of the campaign?

Since none of us wanted to focus on predictable fashion imagery, we decided to deliberately take the Ami de Coeur logo as a parameter for the campaign. Before anything, this shoot is an attempt to celebrate AMI's universe.