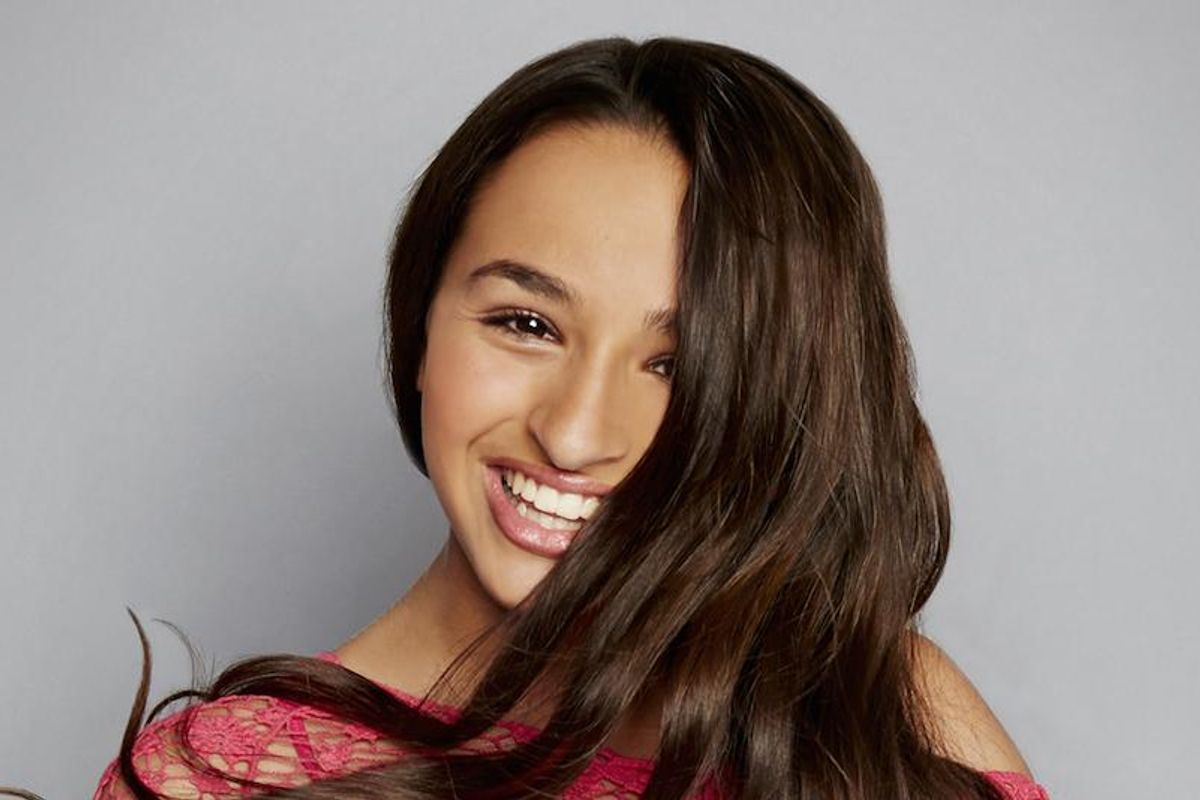 At 15, Jazz Jennings looks and sounds like your typical teenager, yet the star of TLC docuseries I Am Jazz is anything but average. Jazz, who was assigned male at birth, publicly came out as transgender when she was only six years old in a televised interview with Barbara Walters. Since then, she's become a prominent advocate for trans children, named one of Time 's "25 Most Influential Teens of 2014 and 2015" and the youngest person to grace the "Out 100" list, among many other honors, including a visit to the White House. Like many of her generation, she's a whiz at social media, with over 250,000 followers on YouTube.

June saw the release of her first memoir, Being Jazz: My Life as a (Transgender) Teen, in which she relays her life story, from her family's journey learning about transgender issues and successfully battling to get her school to let her play girls' soccer and use the girls' restroom to dating and hormones. This weekend, Jazz will be the youngest grand marshal in the history of the New York City Pride Parade. Paper spoke with her about her double life, the bathroom issue, and changing hearts and minds.

In the book you say sometimes your life feels like Hannah Montana. You have your red carpet and awards/advocacy land then your normal teen life. How do you balance those?

It's hard. I want to be a normal teenager, but when I'm appearing in the media, I get to be myself. And I get my Jazz time -- that's what I call it -- where I just sit and chill on my computer, watch TV on Netflix and relax. In school, no one really talks about the show. At school and in my community, they treat me like any other kid. My life has definitely changed, but me as a person, I don't think I've changed. I'm just the same weirdo I was before I started all of this.

You say in the book that you're proud to be transgender and it's made you who you are. How has it affected your outlook on life?

Being transgender has helped create the person that I am today. It's had a heavy impact on my viewpoints, it's made me more open-minded and accepting of people in society and of myself. It's all about loving yourself, embracing your uniqueness and then sharing that love with other people.

Your family has been supportive every step of the way. What advice do you have for families of trans kids who aren't sure what to do, and also friends of trans kids?

I try to tell them that they're the same person before transition and after transition. They're trying to embrace themselves and flourish into the individuals they truly are. Unconditional love is the most important thing. It's going to be hard; they're going to mourn, even though I don't like that [word because] it's not like grieving over a dead person, but they are going to mourn. To that friend, parent or community member, accept them for who they are because they need your support.

Has there been a learning curve with your friends. Were they instantly accepting or did they have to get used to it?

My friends now were instantly accepting. I'm so public about it that everyone just knows and the people that are okay with that are the people I associate myself with. There have been instances where people didn't know and I had to inform them. Once I told them they shied away from me. Basically, once it was time for our first hangout or sleepover, that's when I normally told them. I'd say, watch this video. This one girl in fourth grade wasn't accepting, so we stopped hanging out.

There's an example in the book where a boy uses a slur against you but later comes around. Do you think people who aren't initially accepting can change their minds?

Definitely. That's one of the main reasons why I'm doing the work that I do today, because I want to help not only transgender kids and their families, but also help people who don't understand. Education and visibility are super important. With that visibility comes the knowledge required to be accepting of someone else. If you are educated, you can make less ignorant decisions.

You posted a photo of you after using the women's bathroom at Target, and in your book you discuss your struggle to get to use the girls' bathroom at school. Why is this an important issue?

It doesn't make sense to me at all. I don't understand what the big deal is. People are making a problem out of something that isn't an issue. We're trying to use the bathroom. Just think of that in the simplest terms. The bathroom. What is the bathroom? A place where you remove waste. It's just pure discrimination. I think everyone should just use the bathroom that they prefer to use, get their business done, and go. Everyone should think like that.

You thanked President Obama in a video you posted online for publicly speaking out in support of transgender people. Do you think we're moving toward positive steps for trans rights?

I have to be honest. When I saw the North Carolina situation going on, I thought, we're regressing, this is not good. And then Obama stepped up and told society we had to be accepting of transgender students and their schools. That really got me feeling better again, knowing that someone so important is making a difference and directing the states to follow policies. Now I do believe we're going more toward the right path.

Are there other things you'd like to see government or society do in favor of trans rights?

Laws are very important, but I think the main thing is society. Even if there is a law, people can still be discriminatory and that's not okay. I wish everyone could be accepting. Not tolerant, because tolerant isn't good enough; tolerant means you're putting up with it. People should be accepting of each other no matter their difference.

You talk in the book and in your recent YouTube video about struggling with depression. Was that challenging for you to be public about? Do you ever feel like because you're so visible you have to put a positive spin on every aspect of your life?

That's a great question. My depression has nothing to do with me being transgender. It's just genetics; my mom has it. I feel like with my story, I've always been the happy transgender child, not the one who's trying to commit suicide, but someone who could give people hope. To reveal that information was hard, but I think it's important. It makes people understand that I face challenges. It's important for people to understand that I'm not perfect. I go through really hard times as well.

Do you have any advice for a teenager struggling with depression?

Depression is super hard. I know from experience that you feel like you're in this dark place and there's no hope. It's a terrible feeling of complete emptiness and sadness. I would advise those going through depression to look at the people around you who are supporting you. I had my mom by my side. She would sleep with me in my bed every single night. She would cry, hoping that I would get better, hoping for my happiness. That's what pulled me out, knowing I had that support. If you don't have that support, look toward yourself being able to flourish as the individual that you know you are. The most important thing is to focus on the moment. If you look too far ahead, you get too overwhelmed.

You're very active on social media -- what's your relationship like with your followers? Do they ask you for advice?

They do. We have the Trans Kids Purple Rainbow Foundation and they email through that; my mom mostly answers those emails. A lot of kids say how hard their lives are, their family isn't supportive, they don't have any friends. I try to let them know I'm there for them and they have to find people in their life who will support them no matter what. They have to stay strong and keep moving forward because having a positive attitude means you can have a positive future.

I read you're possibly interested going into filmmaking as a career. Have you thought about what you want to do?

Right now that's what I want to do. I love films, I love TV shows [like] Game of Thrones and Black Mirror. What I love most about them is when you can tell a beautiful story that has a great message behind it that could really teach you something.

How do you deal with haters?

I'd like to think I have pretty thick skin so when I see comments from haters, I tell myself they are not worth it. I don't want to listen to someone who's going to be negative, hateful and cruel. I want to listen to someone saying something positive. You can judge me all you want but you don't understand who I am or the content of my character. It motivates me, because when I see the comments from haters, I go, looks like I need to educate more people.

How do you feel when you're called controversial? Do you think that there's anything controversial about yourself?