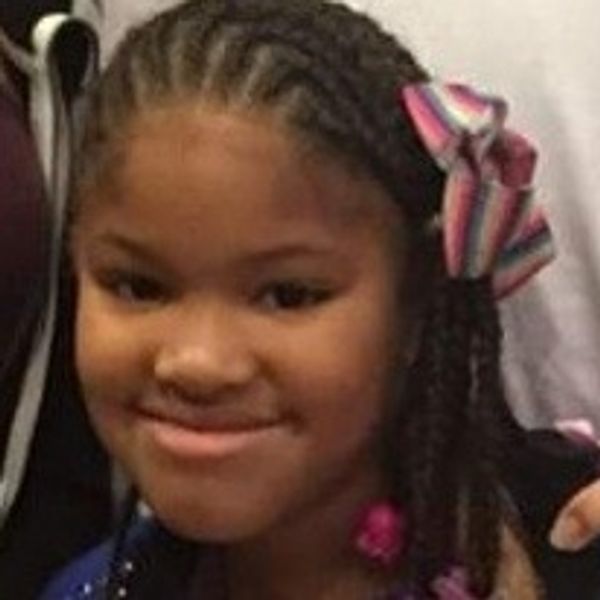 Police are still looking for the man who shot and killed 7-year-old Jazmine Barnes over the weekend in Houston, Texas. Barnes was with her mother and sisters in their car when the gunman, described as a bearded white man in his 40s, pulled up in a red pickup truck and fired several shots into the car.

What we know so far:

Jazmine's mother, LaPorsha Washington, 30, told ABC13, "As I turned around and looked back at the street, I heard shots start firing and they came through my window, broke my glass, and hit me in my arm. They sped off in front of us and the truck slowed down and continued to fire as he was in front of us." They were on their way to get coffee Sunday morning when the shooting occurred just before 7AM.

Washington told CNN that she threw herself over her daughter in the front passenger seat and told her three daughters in the back to "get down." Washington was shot in the arm, and shattered glass injured her 6-year-old daughter. Jazmine was hit and pronounced dead at the scene.

"[My daughter] said, 'Momma, Jazmine's not moving. She's not talking,'" Washington told ABC13. "I turned around and my 7-year-old was shot in the head."

The mother of #JazmineBarnes on the fatal shooting of her 7-year old daughter. Killer pulled up to the family in hi… https://t.co/FDR8al0wqt
— Ava DuVernay (@Ava DuVernay)1546400888.0

Police are calling the shooting "random and senseless," and are not ruling out the possibility of it being a racially motivated hate crime. "It's our belief that it was totally unprovoked, whatever it was, and we're leaving no stone unturned," Sheriff Ed Gonzalez of Harris County told reporters. "We're going to leave every motive out there as a possibility. There was nothing to indicate that the family did anything wrong in any way. They were simply just driving along the service road when this happened to them."

How you can help

The family has set up a GoFundMe page to assist with expenses (Washington, Jazmine's mother, was also injured in the shooting). Along with the police, they are also asking anyone with information to come forward.

Shaun King and civil rights lawyer Lee Merritt have put together a $35,000 cash reward for tips leading to the arrest of the shooter. Photographs of the suspect's four-door red pickup truck have been released to help identify and find the gunman.

Help us identify the person who killed 7-year-old Jazmine Barnes on Sunday. If you live near Wallisville Rd/ E. Sam… https://t.co/r9MANNlZoi
— HCSOTexas (@HCSOTexas)1546296736.0

"I'm asking, from the bottom of my heart," Jazmine's father, Chris Cevilla, said at a news conference on Monday. "Whoever knows anything, please step up at this point in time and help me and my family get justice for my baby girl."