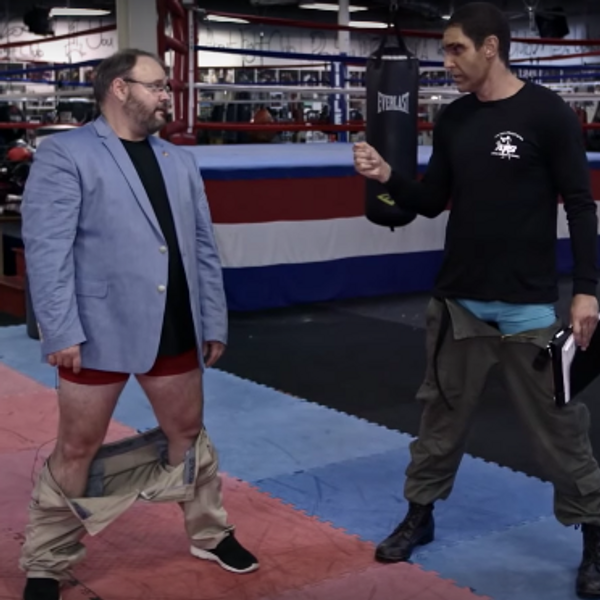 Georgia Representative Uses Racial Slur, Takes Off His Pants in 'Who Is America?' Episode

Comedian Sacha Baron Cohen, famous for playing fictional characters (like Borat) who expose celebrities' and politicians' bigotry, is back with a new TV show, "Who Is America?" In the first episode, he filmed lawmakers voicing their support of arming toddlers as a solution to gun violence.

In the latest episode, Cohen again played Erran Morad, a caricature of an Israeli antiterrorism "expert," and brought Georgia representative Jason Spencer to what Spencer thought was anti-terrorism training. Throughout the course of the episode, Cohen convinces him to yell a racial epithet, do an offensive "Chinese tourist" impersonation, and to drop his pants as a way of "scaring" supposed terrorists, whom Cohen tells Spencer are homophobic.

In the past, Spencer has been known for his Islamophobic, racist, and generally hateful policies. He threatened LaDawn Jones, a black female attorney who advocated for the removal of Confederate statues, saying, "I can guarantee you won't be met with torches but something a lot more definitive. People in South Georgia are people of action, not drama."

Spencer also advocates for a policy that bans Muslims from wearing veils in public. In the "Who Is America?" episode, Spencer says, "I don't call it a burqa ban, I call it an anti-masking statute...To win in the legal system, you cannot be against the First Amendment. See, this is how the Muslims in the country are using the First Amendment against them. You have to fight fire with fire."

He goes on to say that he cannot tell a Muslim person wearing a burqa apart from a terrorist. Cohen suggests, horrifyingly, to use a selfie stick to take a picture underneath a person's burqa to see if they are carrying a weapon, which Spencer willingly practices in the episode.

Georgia House Speaker David Ralston has said that Spencer should resign. In a statement made to CNN, he said, "Representative Spencer has disgraced himself and should resign immediately. Georgia is better than this." Georgia's Governon Nathan Deal has also addressed the episode, tweeting, "The actions and language used by Jason Spencer are appalling and offensive. There is no excuse for this type of behavior, ever, and I am saddened and disgusted by it."


Watch the clip below, but be warned that it contains triggering content: