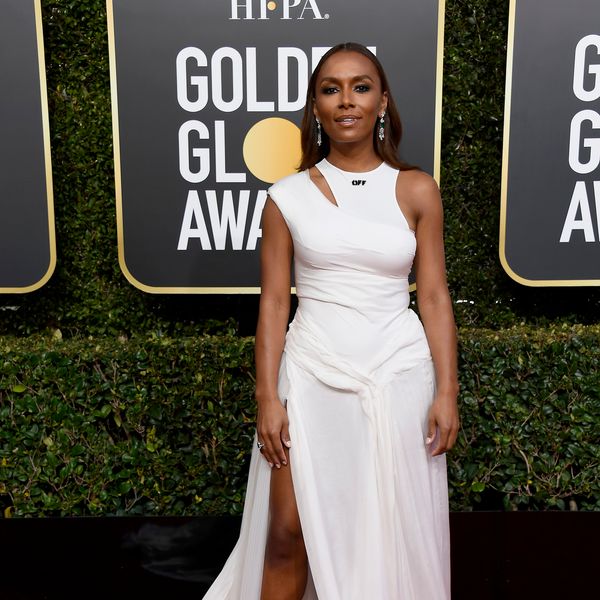 Before even setting foot inside the 2019 Golden Globes, Janet Mock had already made history. The first trans woman of color to ever write and direct a major network cable drama, her appearance alongside the cast of FX's Pose last night was already a major victory for trans representation in Hollywood.

Related | Janet Mock on Why 'Pose' Is 'Deeply Revolutionary'

There is no doubt that the women of Pose were the undisputed stars of the red carpet, but it was Mock's stunning full-length Off-White dress that took everyone's breath away and was a momentous milestone for inclusivity. One of a handful of designs made by Black designers to appear on the red carpet, the Virgil Abloh-designed athleisure dress was a refreshing choice that further cements the status of the Louis Vuitton artistic director as a rising industry giant.

Abloh's seamless blend of streetwear and couture has made him one of the most in-demand designers working today, so it is only fitting that a trailblazer like Mock would rock another trailblazer like Abloh.

PAPER caught up with stylist Jason Bolden, whose credits include dressing the likes of Yara Shahidi, Taraji P. Henson, and Ava Duvernay, to talk about how he approached Mock's red carpet look and the significance it held.

Could you walk me through what your process was like for styling Janet Mock?

Over the holiday I was going through images of what I wanted to go for for her, and I came across that Off-White dress and I was like, "This is kind of interesting." Here's a cutting edge show [Pose], something new, something fresh, and a perspective that needs to be told and it's finally being told, and I'm really lucky enough to be working with someone who is part of that story and who has created that story. I was looking at what Virgil was doing with Off-White and I was like, "This is kind of the same story." Here's this African American who curated this beautiful and edgy collection of athleisure and full-on glamour and I was like, "Why not?" I sent her a picture of the dress and she sent me a text back that said, "Of course you did." It was between that dress and one other dress; we just tried that dress on and she fell in love with it. It really really made sense. It was very effortless, which is what I prefer these shows to feel like.

What were Janet's thoughts on the dress?

We wanted to get rid of the volume and the length of the skirt because the only thing about the Golden Globes, which a lot of people don't know, it's that one carpet you really don't want a train because everyone steps on your dress. It is a smaller carpet and a bit annoying to have your things being stepped on. When she came into it she said, "I literally just want to chop this because I don't want to see anybody stepping on my white dress." She also loved the idea of how it framed her body so perfectly and grabbed her body.

What do you think Janet wanted to get out of her moment?

I'm really lucky that I work with the people I do. They hand their trust all over to me. Obviously, it's a huge moment for Janet and also Pose so I wanted to make the story hit on all different points — like the idea of not just wearing a beautiful dress because it's made by a hoity-toity fancy brand, just have people who have really strong point of view. It's nice to give an opportunity to people who don't normally get that opportunity, which most people of color or people in both worlds — the fashion world and the celebrity world — a culture shifter like Janet would, so I wanted to merge the moment. We're giving Virgil that moment, Off-White that moment, and Janet that moment. It made sense. It was very dreamy the way it appeared on the carpet.

This feels like a watershed moment for the representation for trans people of color.

I think, "Bravo it's about time!" I don't even think we should be having to have this conversation but it's about time. I think it's amazing the whole cast looked fantastic! You know it was really really uplifting to see that and to just see people being looked at by their work and not by anything else.

In her opening monologue Sandra Oh said, "I wanted to be here and look out onto this audience and witness this moment of change. I'm not fooling myself. Next year could be different and probably will be. But right now, this moment is real." What was your take on that?

I hope that's not the case. I hope this doesn't feel like a trend. The idea of a movement is to keep moving, so I don't know how I really felt about that, I just want to keep it going. I don't want to hope to have this great moment, this instant trendy shift. I want this to be the constant life that we all live; again, we're talking about humanity. I'm more into the idea that this is not a trend — that this is a movement, and we're going to constantly move forward.

"I'm more into the idea that this is not a trend — that this is a movement, and we're going to constantly move forward."

What do you hope to see going forward?

I would love to see more representation of people of color when it comes to designing for design houses and having those opportunities, to have people of color having the same access as everyone else — being able to have these powerful stylists for people, who may not otherwise work with a minority or a person of color, being able to do their research and dig into the idea of using these minority brands and giving them those opportunities and helping break them. A lot of people are talking about diversity, but a huge percentage is still not doing the work. It's diversity but no one really cares about that, it's about inclusion. Like are you including designers on your rack that don't look like you?

For me, it's the idea of bringing Off-White from Virgil to my fittings and having that conversation with Janet Mock about that — having her understand it and understanding what it means, not just for a beautiful photo, but what it means for the culture. How do I help constantly shift the culture, keep it moving and going, and keep the momentum up? That's what I hope to see: to see people who don't look like me, stylists who are conscious of the brands that they're deciding to use. Not just parading around saying, "Oh we're going to do this," but not really doing any of that. When it comes to the stylist, that's our power. Our power is to present these brands to clients. I would love to see more people use that power.

Could expand on why you specifically show Virgil to your clients?

I mean, I've used Virgil before. I've used Virgil on Yara Shahidi and Taraji P. Henson. I've used him a lot because I see myself in him. I see myself in Virgil or in the Pyer Mosses of the world or the Charles Harrisons of the world. We don't get those opportunities; Virgil is one of the very few who has a major platform and I feel like it's part of my responsibility to invest in it, place it, and give it the same opportunities I would give to any other major house. I look at it as important as any other French house or Italian house. I present it the same way I do as everything else. It's a beautiful collection and I don't want to disregard it just because. In order for that brand to get red carpet appeal, we have to put it on the red carpet. You have to break it.

It's almost a quietly historic moment.

I also come from the place where sometimes the biggest movements are the things you don't really have to say. Your presence is enough sometimes where you can shift things and Janet didn't have to say anything. It shifted. It literally shifted. It has people talking. It's almost like when you're doing the work, and actually in the trenches, you don't need a spot on your local Channel 7 station because you're too busy doing the work to be waiting for the applause. I think a lot of times so many people are waiting for the applause because they're doing it for the applause. You have people like Janet who is a culture-shifter, she's in the trenches doing the work, and they're probably applauding but she doesn't see it or hear it because she's too busy trying to fix it. That's how I am about the whole situation. It's nice to have really high fashion with a cause.