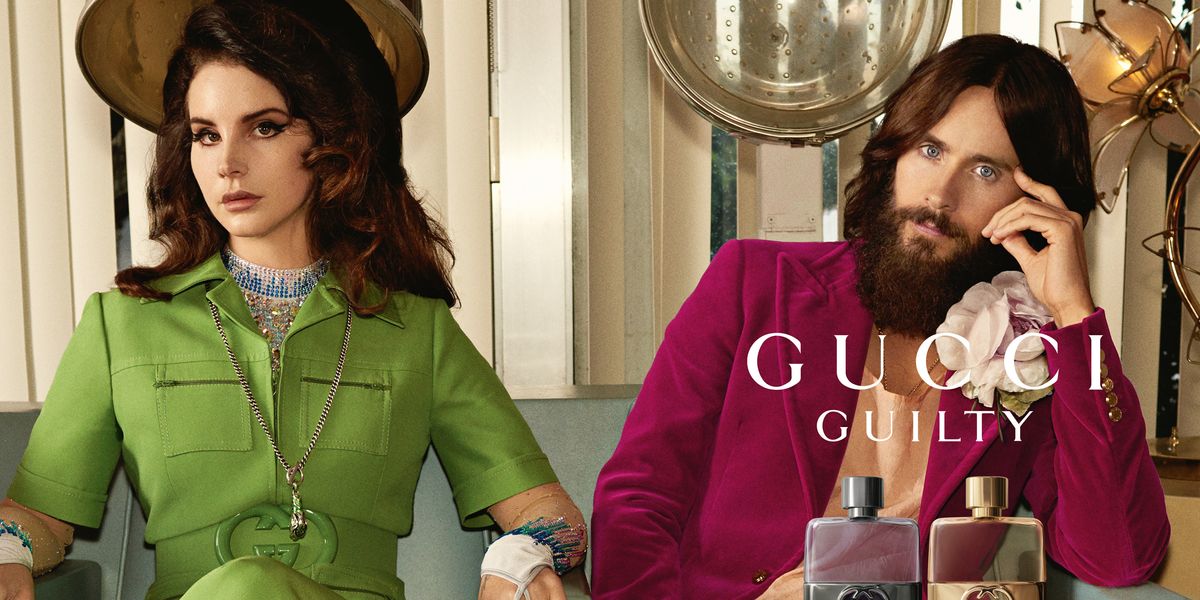 In 2010, Gucci Guilty pour Femme made its debut with Evan Rachel Wood racing a white sports car through a futuristic metropolis. In the Frank Miller-directed film — which debuted during the MTV Video Music Awards — her golden blonde locks whirl in the wind as the vehicle's blazing wheels come to a screeching halt. Wearing platform stilettos, Wood steps out of the driver's seat and clutches a necklace that transports her to a midday tussle in the sheets with Chris Evans. The duo was again intertwined in a Mert and Marcus-photographed campaign that year — their skin dewy and bronze, their eyes full of amorous intent. Frida Giannini's Gucci was clearly guilty. Its "sin" was celebrating the unbridled sexual prowess venerated at the label since the beginning of Tom Ford's tenure.

Nine years later, Alessandro Michele is finally making the brand's best selling fragrance his own. In a new campaign directed by Glen Luchford, protagonists Jared Leto and Lana Del Rey meander about an entirely different Gucciverse — one oozing with nostalgia and eccentricity. Replete with quintessential American haunts from the laundromat and beauty salon to the supermarket and diner (in which Courtney Love is a part of the waitstaff), it also features legendary Los Angeles landmarks including the Hollywood Forever Cemetery.

"It was one of the first places I went when I first came to L.A., but I didn't realize its historical significance or know how many famous people were buried there," Leto says from his Laurel Canyon home days after returning from his band Thirty Seconds to Mars's 2018 Monolith Tour. "I used to go there to work on music or find an hour or two of solitude between appointments."

Thoughtful settings like this paired with Michele's distinctive more-is-more, 1970s-inspired aesthetic make this world a sharp departure from Giannini and Miller's.

Though Leto starred in the fragrance's 2016 campaign (the first under Michele's reign), its concept largely fell in line with the tempting eroticism of Gucci's past. "The first Gucci Guilty campaign we shot in Venice was very sensual and sort of provocative," Leto recalls. "I was half naked in a bathtub with two other people." By contrast the new campaign — in which the bearded 47-year-old wears a fuchsia blazer punctuated by blush-pink, rose-shaped lapel pin — is playful and even a touch cerebral. While its subjects are still distant, cinematic figures, this time they revel in their autonomy as opposed to Hollywood-esque wantonness.

Far from puritanical, this new iteration of Gucci Guilty is indicative of a shift in our collective values. Within the past decade, fashion has become less concerned with sexiness in the conventional sense. The industry has more broadly begun promoting the notion that women should dress for themselves, that men can experiment with their gender expression, and that body diversity on the runway is important — well, some brands have. More surprisingly, Italian labels, which were known for delivering deeply seductive, pragmatic silhouettes in the 1990s and early aughts, have recently become more interested in sportive quirkiness.

This newfound freedom is there too on the red carpet with the likes of Lena Waithe, Jonathan Van Ness, Ezra Miller, and Olly Alexander eschewing black tie norms in favor of presenting their most authentic selves. At long last, it seems that one's idiosyncrasies are more valuable than reaching a mythic state of sexiness.

"The first time I saw Lana del Rey walking around the corner in that green jumpsuit, it was so mind blowing," Leto gushes, adding that the energy on set was entirely different this time around. "She looked so bold, brave, and beautiful. She was a great partner in crime, a total dream to work with." Together, the stars bring Michele's signature mashup of whimsy, nostalgia, and optimism to life, revealing a never-before-seen vision of Gucci Guilty.