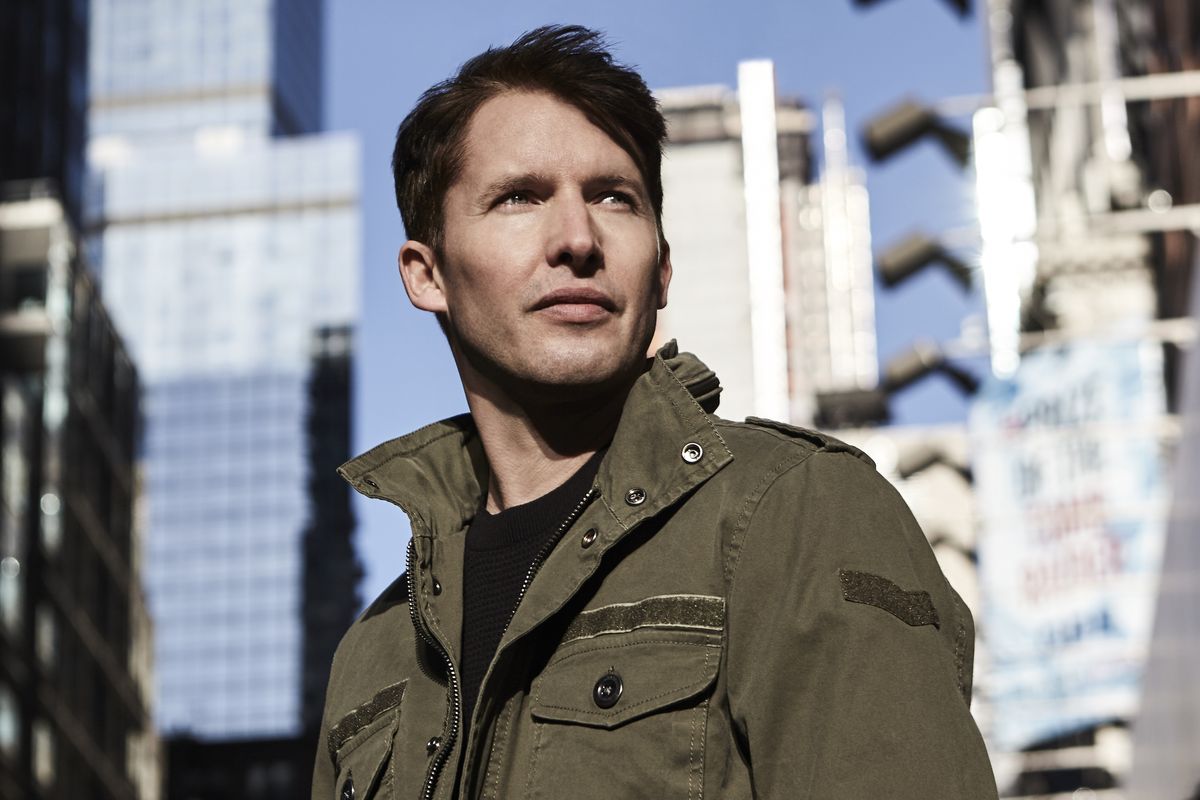 James Blunt on Ruling Twitter, Carrie Fisher, and How We Got Him All Wrong

When googling James Blunt, you will immediately be directed to the video for his 2005 single "You're Beautiful." In it, a shaggy James strips in the snow and sings about the girl in his dreams, before diving off a cliff into the ocean while singing "I will never be with you." It's been over 10 years since "You're Beautiful" went no.1 on the Billboard Hot 100 and its visual counterpart has racked up a casual 140 million views. In short, James Blunt and his song – which is really about coveting someone's girlfriend on the subway while high on drugs – resonated with a whole damn heap of people.

This created eternally sensitive sad boy James Blunt, favorite of your mum and nostalgic millennials ("thumbs up if you are watching in 2016,and you are really beautiful and it's tRue!" is the most-liked comment on the video). James Blunt, to all of us, became the kind of guy that straps his guitar to his back and heads into the woods to be at one with nature. The kind of guy that would reply to an "idk" with a tear emoji. The kind of guy to favor leather wrist cuffs. The guy who writes a song about pining for a beautiful stranger he knows he'll never see again. This is the James Blunt we thought we knew.

And then there was Twitter. Blunt has amassed a social media following ( to rival some of the biggest pop stars in the world, but he didn't do so by being sensitive James Blunt; he did it by absolutely slaughtering our idea of James Blunt. Even though the singer has achieved the success many artists could only dream of, releasing his fifth studio album today, embarking on his fifth world tour, James Blunt's digital presence is essentially drag after James Blunt-drag...and it took off. Unknowingly, James turned token British self-deprecation into a powerful promotional machine, because who doesn't relate to a little self-loathing?

So how did everybody get James Blunt so wrong? We went straight to the source and talked his Twitter persona, deep friendship with Carrie Fisher, and play a few songs for the PAPER Penthouse (including, of course, "You're Beautiful").

I think a lot of people might not realize this is your album. You've been in this game for a while now and yet you're still so self-deprecating. Why is that? You don't feel like you underrate yourself?
You know, I'm British so I take the mickey out of myself, it's what we do best. I suppose I have been so self-deprecating for so, so long, maybe it is disrespectful to the 20 million people who actually bought albums.

Right, you've kind of branded yourself the Nickelback of sad boy songwriting.
Totally, absolutely. I take the piss out of it. Am I proud of it? Of course I am. I'm on my fifth album. I've just announced my fifth world tour and a world tour is a pretty special thing! A lot of people only tour North London and that's what I thought I'd only be doing. I've been very lucky with it. It's keeping me in business.

Exactly, but you came out with this hit single that's still instantly recognizable, you achieved global fame. I'm just curious as to when you looked at all that and still decided you weren't "cool."
I've never been cool, not even at school. I think the word is kind of offensive--it's not something I aspire to be or will ever be. Yeah, fuck it! Musicians always have ups and downs. You ask anyone in the history of music, there are highs and lows – exciting bits and things that don't work so well. Some countries are rolling and other countries aren't and you don't understand because it's the same song that you're putting out. That's music though, that's why it's exciting.

I wonder why that is. Where have you found you've done particularly well?
I've been pretty lucky around the world, probably struggled most with the US. France missed the last album and now is back on board with this album. It just changes. It's healthy that it does so, it keeps your feet on the ground. It would be great to have bigger audiences in the States, but I like the Swiss.

That's right, you have a ski lift named after you in Switzerland don't you?
Yeah, I do. I spent a lot of time there in the army and they said, "Come and open a chairlift we've named after you." I cut a ribbon, threw a bottle of champagne and everything.

You didn't.
Yeah! And I said, "I name this chairlift James Blunt, god bless her and all who ride me." Next year I'm installing a sound system to only play my music, that way it will keep the queues down.

Ah, see this is your trademark Twitter humor rearing it's head.
Yeah, well the weird thing is, for me, I've always been portrayed as this really kind of earnest, serious person. You listen to my music and people go, "Ah, it's so serious and earnest and he's such a romantic, such a sensitive soul." I'm like, "Fuck, no I'm not." "You're Beautiful" is not sensitive or romantic in any way: It's a guy who's high on drugs on a subway stalking someone else's girlfriend and he probably needs to be put away as a devious creep.

Wait, what? See what I thought was, guy sees beautiful girl and is just, I don't know, peaking because she's so unreal.
Yeah, see, exactly. You perceived it in a romantic manner, but I know what it was. It was weird and creepy.

I suppose the confusion comes in because it's just such a beautiful song.
Right, kind of like "Every Breath You Take." Maybe that's why I've had to spell it out more clearly in the new album.

I felt like I grew up on "No Bravery" from Back to Bedlam.
That's a dark song, very political.

Are you returning to that with this new album?
I actually have a song about someone threatening to build a wall and telling you who you can and cannot love. The song says that rather than all these differences, maybe if we saw our similarities we'd be stronger. I'm a soldier rather than a politician, but as a musician you can point out positives and negatives. We live in a world fueled by negatives, the stories are all the negatives stories. They try and control us with fear.

Even for myself, I'll talk about the negatives, not the 20,000 people that turned up to a concert. I'll focus on a guy tweeting at me rather than the guy that's bought a ticket, queued to get into the concert and maybe even taken a train ride there. The guy at home is probably just sitting there with his trousers round his ankles, yet for some reason I was taking his opinion on board. So now when I tweet, I'm just laughing at myself.

Was that a conscious shift you had to make, deciding to not give a fuck?
I've always been like that, I just never had an outlet for it. When I first started on Twitter I set up an account called Dirty Little Blunt, then the record label said no. Then they realized what I was doing and called me saying, "Please stop doing that."

They took Adele's Twitter away from her as well.
Trump, Adele and me--we have something in common.

Do you find you have a very thick skin now?
If you put music out, music is entirely subjective. If you put your head above the parapet you're going to get shot at and you should expect that. I've got a fair bit of whack in the States, but you take the rough with the smooth.

Really? What's the go-to DM you'd receive on Twitter?
They're actually all very nice, but my favorite is letters. I keep them all. When someone has taken the time, I mean they'll often write about how my music got them through the death of a loved one. You feel like you have to keep it, just out of respect to that person.


I know you had a very close relationship with Carrie Fisher--I'm so sorry, this must be a hugely difficult time.
She was the most amazing woman. We met at a restaurant in Notting Hill. She asked me what I did, and I said I'd just left the army and I'm becoming a musician and I have a record deal and need to come to LA and she said, "Well you're going to need a place to stay." I lived with her ever since, really, and recorded three albums in her house.

Her house has been my home and that lady, she was my mother in the States. It's a tragedy. Although while life will be a lot less fun, I think she went out at the top of her game. People won't just know her as Princess Leia, they'll know her as a writer on Family Guy, as a script writer, the star of fucking huge movies. She went out at the top. Maybe she chose her time.

Absolutely. Actually I'm intrigued by your army-to-music transition, that's not the traditional route. Were you always songwriting even throughout your time as a soldier?
I'd always written songs. I actually told so many people in the army that I wanted to do music that eventually everyone just told me to shut up and go do it. Then I found a manager and we're still together to this day. I'm like Bill Nighy's character from Love Actually. We'll probably always be together.

Just given the longevity of your career and how successful you've been, is there anything you really feel like you still really want to accomplish?
I would love to be invited by the Americans to play the Super Bowl.

I can see that. You're a great dancer. The pyrotechnics. Your constant comparisons to Katy Perry. It's all up your alley.
Thank you so much. Exactly. 2019 is it for me I think. I can't wait.

Seriously, is there anything left you feel like you haven't yet cracked, or people you would want to work with?
You know what? It's kind of been this album. I've worked with Ryan Tedder from OneRepublic, I go on his tour bus and write songs and I don't even have to put out. Ed Sheeran, as well. I didn't want to repeat what I did before.

Ah, so this album is a real departure, the James Blunt reawakening.
I just needed it to be different, you know? If you wanted "You're Beautiful," it's on the first album. I needed to mix it up. My friends listened to it and said that it was a relief they don't have to lie to me anymore because they actually like this one. I think it's a lot more confident and bold. I'm really excited by it.

We were also blessed with a stellar acoustic set in the PAPER Penthouse. In addition to "You're Beautiful," Blunt performed two songs off The Afterlove. Watch below: