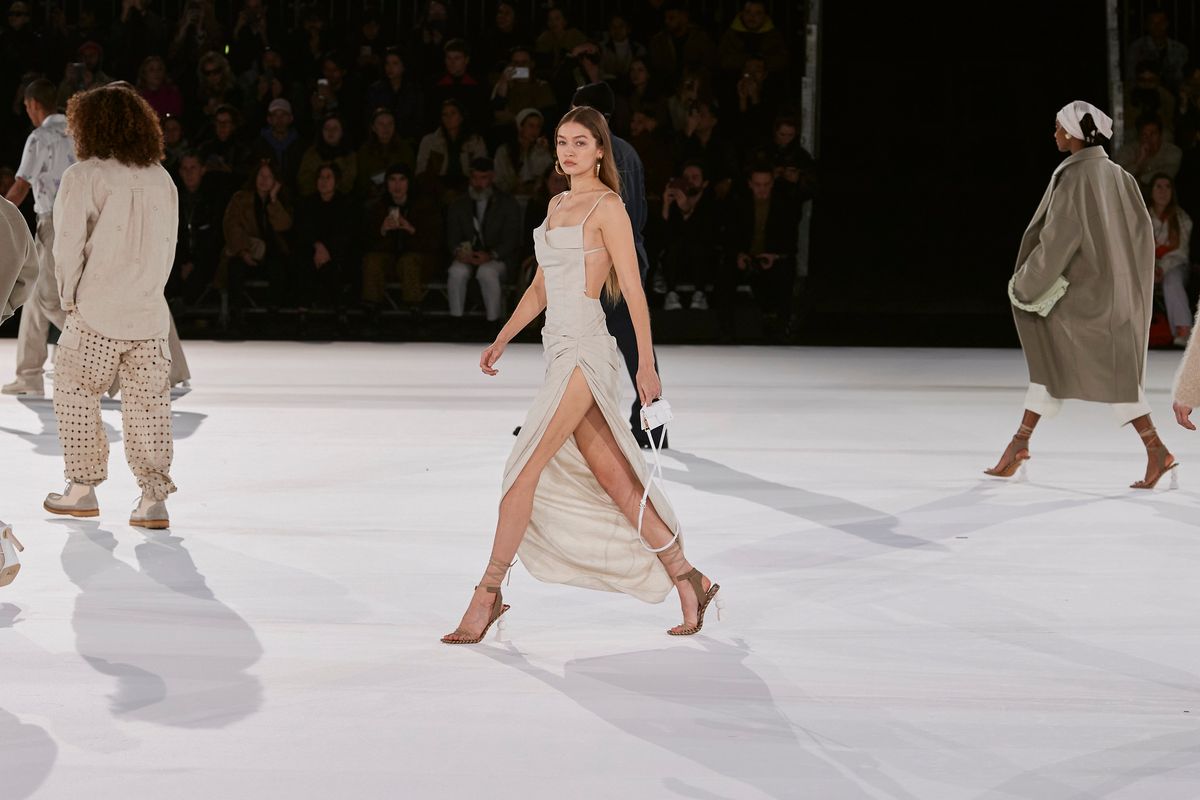 It wasn't even a half hour until the doors were slated to open before huge hordes of fashion types, many of them seemingly under 20, had eagerly gathered around for the next Paris Fashion Week show. Some passers would likely think the crowds were there for a big pop concert of sorts — the venue was the La Defense Arena, a stadium that seats more than 40,000 — but they would be wrong. The fans were there for Simon Porte Jacquemus, who has arguably attained rock star status in some fashion circles in just a few short years.

After a successful one-off showing last season in the lavender fields of Provence, Jacquemus returned to Paris after announcing the brand will show co-ed collections on the men's schedule moving forward, hence the numerous women's looks presented. Back at the gates, showgoers were getting rowdy as they tried to push and shove their way in once the gates finally opened. (I overheard some guests used fake invites on their phones to get in, which went unnoticed by security detail.)

Once we were finally let in, a vast square show space filled up the entire runway, as attendees sat in bleacher-style seats around the enormous set. The first model to walk out was Laetitia Casta, the 41-year-old French actress and model who gained popularity in the '90s as a Guess girl and Victoria's Secret angel. The look she was wearing was central to the theme and inspiration behind the collection, dubbed "L'Année 97," or "The Year '97."

The year in question happened when Jacquemus was only seven years old, which is when he designed his first piece of clothing. "I was seven when I made a skirt out of a curtain for my mother, and she brought me to school wearing it," he told Vogue. His mother, who passed when he was just a 19-year-old student, is a constant source of inspiration for the designer (he named his brand after her maiden name and has dedicated past shows to her memory.)

That skirt he made for Valerie (his mother) formed the basis of the collection, starting with the aforementioned look worn by Casta: a linen pencil skirt in a muted shade of beige, the material of which was incorporated throughout. (She paired it with an off-the-shoulder knit bandeau, adding a seductive element to the otherwise humble color palette and fabric choice.) Iterations of the women's ruched halter tops with thigh-high slits from past collections appeared again this season, as did their signature oversized blazers and versions of their best-selling micro bags.

For the men, it was a continuation of the country-boy meets South-of-France aesthetic he's developed since first introducing menswear a year ago. Loose silhouettes, baggy trousers and cargo shirts dominated the lineup, a sharp contrast to their sexier female counterparts. After Vittoria Ceretti closed the show, all of the models emerged and traced around the entire space before a beaming Jacquemus came out for his final bow, looking every bit the rock star he's been made out to be.