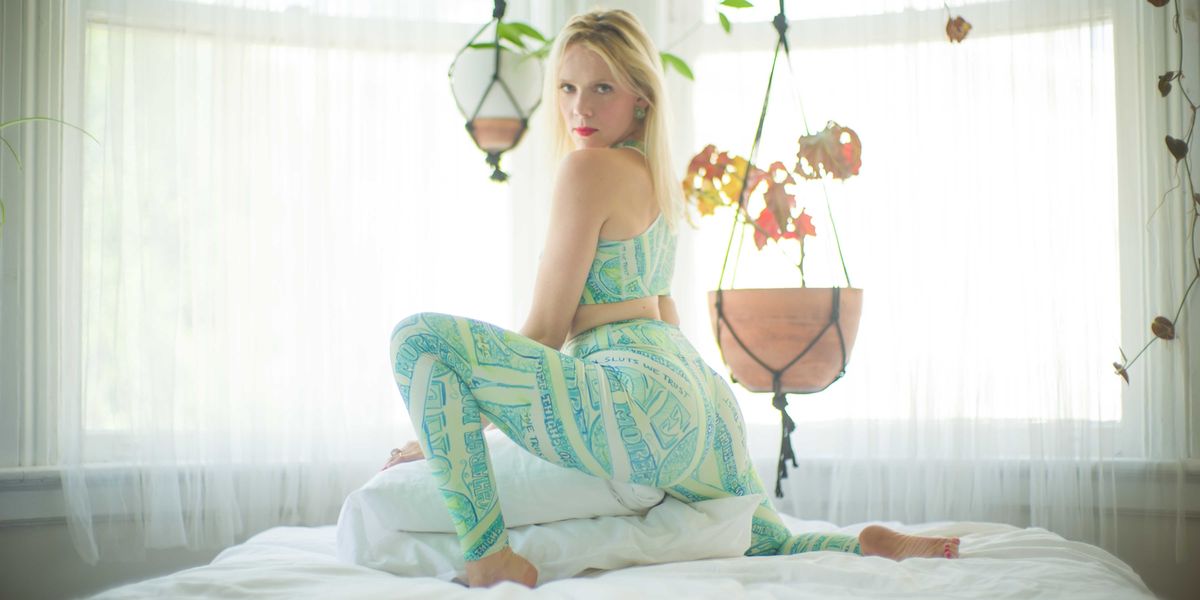 Jacq the Stripper on Her Role in 'Hustlers'

When Destiny (Constance Wu) enters the backstage of Moves, the fictional strip club at the center of Hustlers, she's met by a group of brash, bad-ass dancers whose charisma, uniqueness, nerve and talent jump right off the screen. Amongst them, three former sex workers: Cardi B., Transparent's Trace Lysette and Jacqueline Frances, a stripper/comedian who has been advocating for sex worker rights while sharing the upside of life on the pole through her sexy, satirical Instagram account, @JacqTheStripper for years.

Frances also served as a consultant on the film, lending her real-life experience as a dancer to the ensure the authenticity of Hustlers' portrayals. In turn, the film — based on a 2015 New York Magazine story by Jessica Pressler about a group of strippers who scam their monied Wall Street patrons after the 2007 recession — has been praised for its nuanced telling of the sex worker experience. It also showcases an exclusively female perspective, while raking in box office dough and critical praise, with the rumor mill churning out potential Oscar noms for actress and producer Jennifer Lopez.

Related | At $33.2 Million, 'Hustlers' Is Jennifer Lopez's Career-Best at the Box Office

But, despite the applause, there has also been harsh criticism from sex workers centering around the fact that Hustlers did not compensate dancers at Show Palace, the club used as a set that was shut down for filming.

Here, Frances shares her views on the film's inherent power to shift the needle on the mainstream acceptance of sex work and responds to its criticisms.

How did you get involved in Hustlers? Can you share what made you decide to get involved?

I got an email from a casting director in January, inviting me to read for a part. I went to the audition, met [director] Lorene [Scafaria], and was offered a part. I was also asked if I would be the comfort consultant on set. I was nervous to jump on board because this is not a slice-of-life stripper story, this is a heist. When I read the script, it was fun and compassionate, and the fact that Lorene wanted my input as a stripper to bring authenticity to the story was something I really appreciated.

What was your role exactly on the film?

As a consultant, my main responsibilities were to make sure everyone was comfortable and informed about the scenes that took place in the club. I felt like I could be most impactful when I could explain why we move like this, why we talk like this, how this business works and how the choreography is entirely inspired by that. Like, we move slowly and talk slowly because the incentive is to keep the clock ticking, to keep them spending. As Cardi B puts it so eloquently: "Drain the clock, not the cock."

You mentioned that you knew about the girls at Scores while you were working in the city, can you tell me what your impressions were? Was there a lot of chatter on the scene at the time?

I remember reading the piece and thinking, fuck, these women are brilliant and bold. This is some iconic thieving. I remember being like, "Holy shit is this problematic. We need to talk about it."

When did you stop dancing officially?

I wish I could dance; clubs won't hire me anymore. I'm too mouthy. I'll never officially 'retire' but right now I'm heading out on a comedy tour which doesn't leave much room for shaking my ass for money. But as long as I'm performing, I'm happy.

I've been in the game for almost ten years, so I relate heavily to the baby stripper of my early days, not knowing what I was doing, not knowing my power and how to harness it. And I'm not quite at Ramona/J.Lo caliber yet, but I do feel like a mama bear when I see new girls floundering about without a clue how to upsell.

There's nothing you can't learn from strippers, man. Everyone brings their unique set of talents to the club and it's always interesting to see how that unfolds with teamwork and business strategies.

Can you talk about some of the criticism the film has received from sex workers and strippers? Do you think it's warranted?

Strippers and sex workers have every reason to be anxious about a movie depicting their livelihoods. Look at the track record. We are usually depicted as two-dimensional victims who almost always experience gratuitous violence at the hands of men who face no consequence. I think it's important to keep the conversation going about how strippers are portrayed in mainstream media, and the fact that we have zero job security doing this work. If anything, I hope this movie is an opportunity to shed light on the real challenges we face on the daily.

Some of the criticism comes from the fact that Show Palace, the club where the movie was filmed, was closed for filming and as a result, dancers lost out on pay.

Because we're independent contractors, when a club rents a space out, owners take a handsome buy-out but the dancers never see any of that cash. It's how the industry has always been, and it's not fair. The fact that we are independent contractors but treated like employees (but with zero employee benefits) is just another example of the systemic exploitation of our labor.

What do you hope the film brings about?

I really hope Hustlers ignites a willingness to talk about sex work, stigma, and inspires people to engage in more compassionate and nuanced conversations with the people who actually do it. I hope the huge success of the movie means more of Hollywood investing in narratives that put sex workers at the center of the story. We are all hot and interesting; it's great material, guys.

What was it like to see your world being portrayed by someone with the level of fame as J.Lo? If she's nominated for an Oscar, do you think that does anything for the stripper/sex worker community?

It's pretty wild. Sex workers have been working so hard for so long as activists, organizers and community leaders. They are finally starting to get the mainstream recognition they deserve, and the fact that their stories are on the big screen and portrayed in a fun and compassionate way is a testament to their hard work and allies like writer/director Lorene Scafaria listening. Hopefully awards season will have some good speeches calling for decriminalization. It's time.