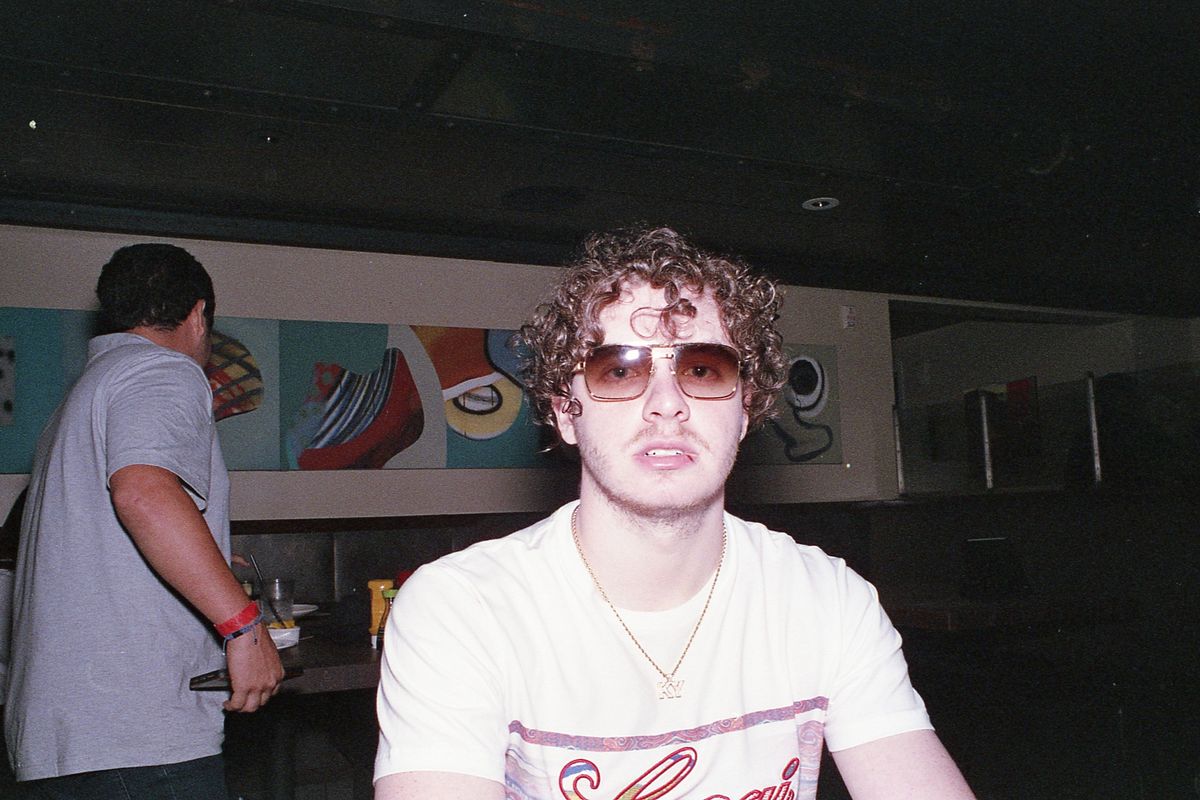 Nothing released so far in 2019 goes quite as hard as Jack Harlow's first verse on the standout track, "Ghost," from his new album Confetti: "She want me to serenade her, but you know I'm bashful/ I got all the whipper-snappers and the lil' rascals." He keeps it cool, but under his words is a confidence he's been cultivating for the better part of his career. There's a certain swing to his lines that harkens back to early 2010s — a time when rap was about delivering blow-for-blow comebacks and buzzing choruses to fuel commenters and spark fan wars. A decade later, however, he's managing to make his sound distinct — and, in a way, more fiery than before.

When talking about his new album, he argues that, sonically, it's his best yet. There aren't really any skips on Confetti, nor any slumps. His energy and tone are high throughout, biting at each 808 and bass hit that pops up on his more aggressive tracks. It's clear that Confetti stands alone from his previous records, 18, Gazebo, and Loose, but in its cohesiveness rather than quality. While he's been just as high energy on his other releases, Confetti remains an overarching testament to his network and vision as a creator, without losing sight of his Louisville roots.

PAPER talked with Harlow ahead of his sold-out New York City show about the new record, as well as his experience working with R&B sensation Bryson Tiller, and tapping into the flows of his '10s rap forefathers. Check out the full interview, below, and watch his newest visual for one of Confetti's most bombastic tracks, "Warsaw."

Where in the world are you at right now?

I'm actually in my hometown, Louisville.

You've been on the move lately, have you gotten to see anybody in Louisville that you haven't in a while?

For sure, but I come back to Louisville at least once a month, so you know it's always fun. I don't wait too long between seeing people.

You're about to go on the tour right?

I've never been this excited for a tour just because I never had sold-out dates like this. I'm super excited, I think it's going to be a blast.

Last year we did the Loose tour, and every night was ranging from 75 to 200 people max, until I got to my hometown. There were no sold-out shows, except for Louisville, but this year, we got some shows sold-out, so things are obviously moving. When you put bodies in a room it's such a good feeling, because it's like... damn, people want to come see me. I sold out a date.

When did you start working on it?

I haven't had a chance to sit down and make one of those cohesive, thematic, thoughtful, put-together projects before. There are things I like that are consistent, so there's some cohesion in my projects, but really every project I've dropped so far has been a cluster of what I've created over a certain amount of time. I'd say I started Confetti early last summer, so it took about a year to make.

What was the first track you made off it?

First track, I think it was "Walk in the Park," and then "Goin Back Down," and "Sunday Night," probably close second.

What's the recording studio for you like when you're getting in there, concentrating, and getting into it?

So, I get made fun of. I recorded "Mean Streets" with DJ Drama, and a lot of times he comes in my sessions and he'll be like, "Damn, it's just you in here?" There are certain energies I want to tap into, so I don't want to be worried about who else is in the room and what their opinion is. I'm pretty receptive to energy and I'm also a people pleaser. When there's people in the room I'll be conscious of what they want to hear, so when there's a certain type of song I want to make, I like to be by myself.

I mean to have people party to your music, you almost want the party in the studio while making it.

100%, because you feel it differently. When you're in the booth and you look out there and there are people in there reacting, it feeds you.

Was "Ghost" one of those tracks by any chance?

No, I wouldn't say that, but I wasn't alone. It's crazy because four of my producer homies were in there at the same time. They made the beat together. There was more than one person in the studio, but it wasn't a party vibe — more like some hard shit, they were making a beat and I wrote the whole thing.

How did you come up with the concept for the "Ghost" video?

My homeboy has been coming up with a lot of the treatments for my videos, so he just had a treatment for "Ghost." We actually got a permit to shut down Main Street, which is the main street in my city. That was crazy. We just told people to pull up, that's what we do a lot. We know a lot of people in the city. It was a production, it came together really well.

I wanted to ask also about "Thru the Night" with Bryson. I wondered if you were a fan of Bryson's before getting him on the track?

He's one of my heroes. He's from Louisville, so it was a big deal to me. It was a milestone, a dream come true.

What's your favorite Bryson track, if you had to pick?

I know every Bryson song, but my favorite is "Don't" because it's just incredible. To me, it's one of the top three songs of the decade. The tempo of it was unheard of, it slowed music down. The melody, I mean it's just pure ear candy and I love a lot of his music, but it's just a perfect song.

He really changed the game, I think. What was the process like for that, to get him on "Thru the Night"?

We had been cool with each other for a while, and I'd seen his assistant in Vegas and I told her, "Yo, I got a song," and she said, "Send it over." He and I followed each other already, so we had a relationship, but we had never worked together. I saw him at the derby in Louisville. We've just been getting closer and closer since, which means a lot to me because you know I look up to him, for real.

Did he influence your flow on this project, or was it a combination of a lot of artists you look up to?

I think it was a combo, but he definitely influenced me. His melodies, his flows, the way he uses his voice. The thing I like about Bryson is that he makes ear candy, and that's what I want to make. I don't like the same tempo as him, on a lot of records, but I definitely aspire to have as addictive of a sound as his music does.

What do you hear from your fans, how have they responded to the new music?

I've gotten a few comments from people that I think are also observant. I just get little comments here and there, it's not super consistent, but I've heard a fan say to me that my music feels like 2009 to him. And he didn't mean it in a "This shit sounds staged" way, just that it's reminiscent. So for me, that's dope because that's a nostalgic time for me. Even though that's only a decade ago, that's when I was absorbing my music taste, in a way.

I'm also curious as to where you see the new album fitting in your larger discography.

It's the best one to me. Loose was an evolution from Gazebo. Sonically, the music is a lot better. Gazebo was really personal, but I don't think the music sounds as good as Loose. So it's kind of a marriage. The only complaint I get from Loose was that people felt like they didn't get a chance to get to know me better. They didn't learn about me, whereas Gazebo, you could really find out who I am on a lot of those songs. That's one thing I wanted to get back to on Confetti, giving people a piece of my soul a little bit. I feel like I accomplished that but I still kept the party moving without sacrificing any sonics just to say what I wanted to say.