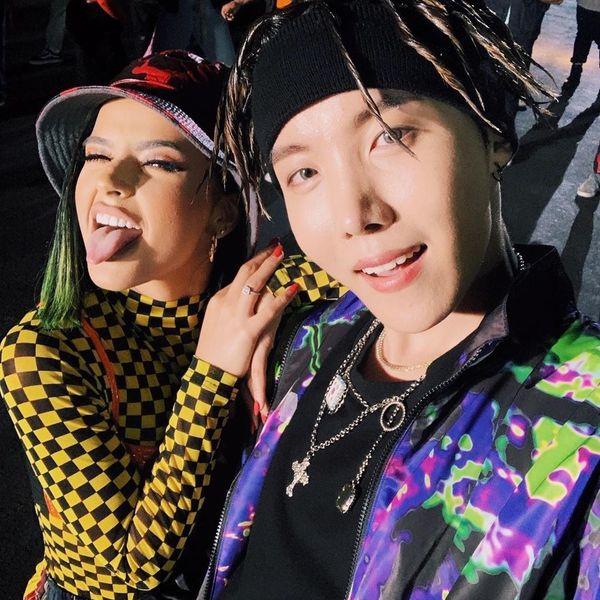 BTS's J-Hope and Latinx artist Becky G have created a trilingual masterpiece entitled "Chicken Noodle Soup" — an homage to the early 2000's hit by DJ Webstar and Young B (who now goes by Bianca Bonnie), featuring AG aka The Voice of Harlem. And since the music video dropped on Friday, the video's gotten over 28 million views.

Fans are celebrating the bop, along with artist Becky G who tweeted, "#ChickenNoodleSoup ya salió!! Korean, Spanish, English... we brought cultures together & made a trilingual song! Music really is universal." She continued, "I hope everyone enjoys this! Shoutout to my friend J-HOPE! We did that!"

Bianca Bonnie even tweeted in response to her hit's resurgence, "Made a song about Soup & now I'm eating for life."

Per Korean blog Soompi, J-Hope said in an interview with Naver's V Live, "I've been working on it for a long time. When I was working on Hope World, this song was going to be a b-side on it." He spoke about how the original "Chicken Noodle Soup" was a song he often listened to while he was still learning how to dance, and how he had really wanted to pay homage to this song he loved so much, and wanted his appreciation to be heard as part of his solo album.

It saddened him that he wasn't able to add the song to the Hope World track list, but luckily he was still able to release project with Becky G. "I thought it was a track that can really express who I am. You know how 'Hope World' contains a lot of my own color—I did what I wanted to do. And 'Chicken Noodle Soup' is the kind of music I wanted to do too," he said on the talk show.

On Twitter, people aren't just celebrating the new track, but the history of the original "Chicken Noodle Soup" — which is important in terms of remembering and paying respects to the culture that birthed the song, and the dance move seen in the music video. Twitter user @tybutdisagree decided to take it upon themselves to educate the Internet.

cultural exchange can be a beautiful thing but the merits of it can also be spoiled if we don't educate ourselves o… https://t.co/MwIf9h8zn6
— TY BUT DISAGREE (@TY BUT DISAGREE)1569595082.0

this was then commodified by dj webstar, young b and voice of harlem in a track from september of that year, the track most of us 90s babies know and love today, the chicken noodle soup. with a soda on the side! pic.twitter.com/TUZz8EUS3o

Imagine all these kids today listening to Chicken Noodle Soup and not realizing that the original song went so hard in 2007
— Holly Desjardin (@Holly Desjardin)1569604714.0

The hashtag #ThankYouBianca has also become trending, with people thanking Bonnie for her work, and for inspiring J-Hope. Bonnie tweeted in response to all the love, "Thank you #BTSarmy @iambeckyg @BTSW_official I'm trending worldwide right now with the #ThankyouBianca #Hashtag love y'all"

@BIANCAisKING Thank you for this iconic song that inspired Jhope and Becky G! This song will always be enjoyed thro… https://t.co/gclIVv8ZiX
— marissa⁷🌥 (@marissa⁷🌥)1569614694.0