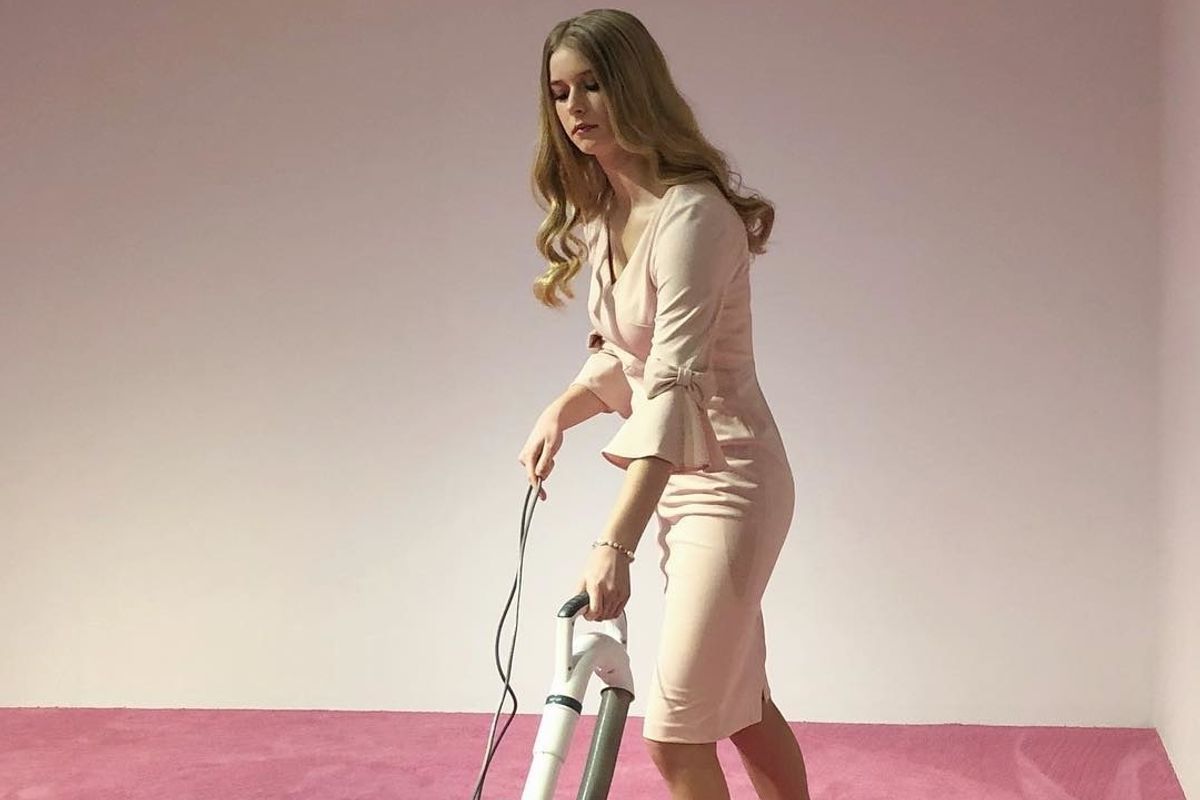 Ivanka Trump, who describes herself as both a feminist and an avid art fan, was, in fact, not a fan of a new Washington D.C. feminist performance art piece, which invites onlookers to toss crumbs onto a carpet for an Ivanka look-alike to vacuum up.

Created by iconic performance artist Jennifer Rubell (who made headlines recently for a giant Hillary pantsuit-shaped giant cookie jar), "Ivanka Vacuuming" stars a tall, thin, blonde model in pumps and a pink ruffled business dress endlessly vacuuming. For two hours every night at the Flashpoint Gallery, the audience can toss crumbs from a towering pile in the middle of the viewing area, for the fake-Ivanka to clean up off a perpetually dirty pink carpet, like Sisyphus pushing his boulder up the hill.

According to Artsy, the performances was:

"Inspired by a figure whose public persona incorporates an almost comically wide range of feminine identities—daughter, wife, mother, sister, model, working woman, blonde—Ivanka Vacuuming is simultaneously a visual celebration of a contemporary feminine icon; a portrait of our own relationship to that figure; and a questioning of our complicity in her role-playing."

"Here is what's complicated: We enjoy throwing the crumbs for Ivanka to vacuum. That is the icky truth at the center of the work. It's funny, it's pleasurable, it makes us feel powerful, and we want to do it more," said Rubell.

Ivanka did not seem to find this a compelling or worthy query. In the Swift-ian model (Taylor, not Jonathan) of weaponizing feminists' rhetoric against them, the first daughter criticized the piece on Twitter, calling it anti-feminist, and suggesting that it "knocks" women down.

Other members of the Trump kingdom were quick to pile on, defending Ivanka:

Sad, but not surprising to watch self professed “feminists” launching sexist attacks against @IvankaTrump. In their… https://t.co/tU52Qji2nr
— Donald Trump Jr. (@Donald Trump Jr.)1549388179.0

Eric Trump said in an appearance on Fox & Friends:

"These leftists called up a modeling agency, saying, 'You know what, I want to get a nice woman to come stand on a carpet, with a vacuum of all things, so that our people can throw food and crumbs to mimic a powerful woman who has done more for women than probably anyone in Washington, D.C."

"Think about that hypocrisy," he continued. "They label themselves the quote, unquote 'party of women,' yet they're throwing food, they're throwing garbage at a woman on a carpet holding a vacuum cleaner to mimic someone who really does care and who has fought so hard for women."

Well! Those are some words and sentences. With regards to Eric's claim that Ivanka has "done more for women than probably anyone in Washington, D.C.," he seems to have forgotten about Nancy Pelosi, Alexandria Ocasio-Cortez, and... the 350,000 other women besides Ivanka who reside in D.C.

Ivanka claims that she "chooses to build women up." Jezebel, however, has compiled a helpful list of examples of times that she did the exact opposite:

Ivanka's empty feminist resume aside, it seems to me that, far from being disrespectful, Rubell's piece is doing something important for Ivanka that few others are: taking her seriously. Rubell is giving Ivanka the dignity of being a part of a critical feminist discussion, that substantively grapples with her legacy and reality, without writing her off as a Tomi Lahren joke.

Rubell agrees. In response to Ivanka's criticism, she invited the first daughter to come see the exhibit herself, and explained: "Not knocking anyone down. Exploring complicated subjects we all care about."

@IvankaTrump Ivanka, I would encourage you to see the piece and form your own direct response. I would be happy to… https://t.co/Bfnn8wLcmW
— Jennifer Rubell (@Jennifer Rubell)1549385123.0