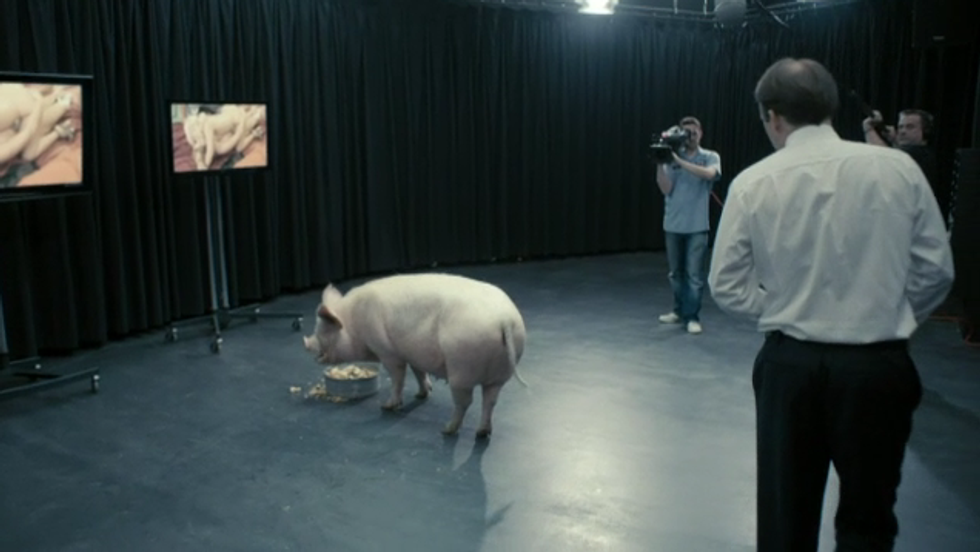 It's Not Just Pig-Fucking: A Guide to Horrible Dude Initiations

by Eric Thurm
PAPERMAG
In a scandal that Twitter is both grossly and appropriately calling the Bae of Pigs, British Prime Minister David Cameron is being accused of putting his dick in the mouth of a dead pig. A new, unauthorized biography of Cameron alleges that it was part of the initiation ritual for a secret society at the University of Oxford -- the Piers Gaveston society, which apparently throws a "very well-organized orgy" every summer.
That makes this story less of a reflection of Black Mirror (though that's certainly an easy and fun way to think about a story involving a prime minister, a pig, and a penis), and more of a look at the things that entitled young dudes do as part of their path to power -- particularly as they move through the education system and its attendant organizations. There's a long history of now-famous men having been a part of these societies.
Consider the infamous Skull and Bones society at Yale, which includes as members everyone from John Kerry to Austan Goolsbee, and which reportedly steals things from other societies (like skulls). It also numbers several presidents, including George W. Bush, whose fraternity, DKE, also notably branded its pledges. Princeton's eating clubs, which have been home to nearly every graduate of the prestigious university, recently came under fire for circulating a rather demeaning video. Outside the circles of political power, Emmy winner Jon Hamm was involved in a lawsuit over fraternity hazing, accused of everything up to dragging a boy around with a hammer... by the balls.
Look: Even Will Ferrell thinks fraternities should be banned, but that won't solve the problem -- they're a symptom of a broader problem of young, male (usually rich and white) entitlement, which creates avenues to reach positions of power, whether explicit or not, then allows only certain people to travel through them. Think of Viola Davis' speech from the Emmys last night -- that sort of achievement is only possible when the opportunity exists, and these organizations often exist to create barriers to that type of achievement in the first place. Basically, what we're saying is, David Cameron (and the people who maintain the system that produces people like him)... is a pig.
You May Also Like
Beauty