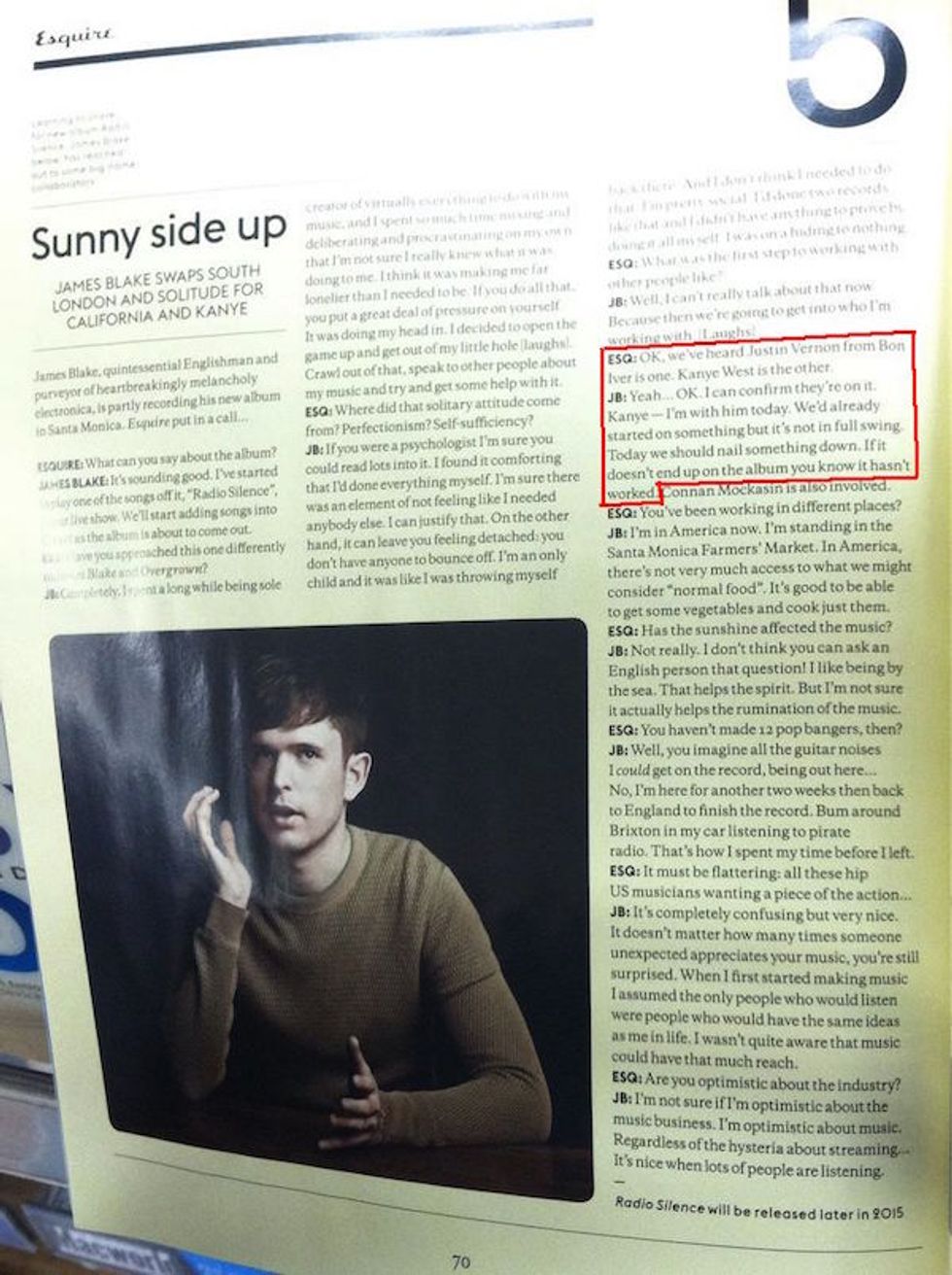 It's... Lit? A Timeline of James Blake-Kanye Collab Rumors

A new Kanye West album rides the horizon, forever out of our reach (and forever an impending brick until the moment it hopefully isn't). Meanwhile, on the other, more daintily coiffed side of the Atlantic, a new James Blake album similarly looms -- this one fueling far less speculation but still dangling in the near future ripe with the possibility that it will be really, really good. But what if those two albums were... similar? What if James Blake and Kanye... collaborated? Together? On music? What if Kanye appeared on James Blake's new album and, in Stephen Colbert's words, "feated"? Let's investigate.

August, 2011 -- Just a few months after the release of Blake's stellar debut album, he announces a collaboration with Bon Iver's Justin Vernon, titled "Fall Creek Boys Choir." Writing for Grantland, Amos Barshad describes this as the pair "Watching the Throne" -- "the act of two individually successful musicians temporarily joining forces." The term comes from Watch the Throne, an album Blake will later admit he was invited to listen to before its release. "Fall Creek Boys Choir" does not sound like Watch the Throne.

November, 2013 -- Kanye calls Blake his "favorite artist" in an interview with Wired 96.5, prompting speculation that the two will work together at some undefined point in the future. One of the DJs crassly says "James Blake just made a ton of money." Kanye is obviously uncomfortable.

February, 2014 -- Blake expresses interest in the collaboration in an interview with Rolling Stone. claiming that Kanye has asked him to work on the follow-up to Yeezus (the album currently named SWISH), but that he isn't sure if their styles will be compatible -- especially since Kanye has described the record as his Born in the U.S.A. It is here that Blake describes hearing Watch the Throne, saying "It was nice to hear these songs that eventually became massive." Here is the video for one of those "massive" songs that does not feature James Blake.

November, 2014 -- In an interview with The Miami New Times, Blake, who appears to be mostly done with his follow-up to 2013's Overgrown, confirms that, yes, he is still interested in working with Kanye, and has a "specific song" he would like to get him on, if it winds up being possible before the release of the record. As the piece notes, Blake has collaborated with RZA on Overgrown's "Take a Fall For Me," a song that, yes, does not feature Kanye.

July, 2015 (today) -- Pigeons & Planes reports that Reddit has discovered what appears to be the newest issue of Esquire, which includes a quote from Blake confirming that, yes, he is working with Kanye. He is pretty sure. "I'm with him today," Blake says in the page found on the following image. "Today we should nail something down." He admits, however, that the track might not end up on his album, because the collaboration still might not work. Speculation continues.


Please return for tomorrow's installment of Guessing Takes With James Blake, where we track the rumor that Blake was maybe going to live in a house with Chance the Rapper or something.