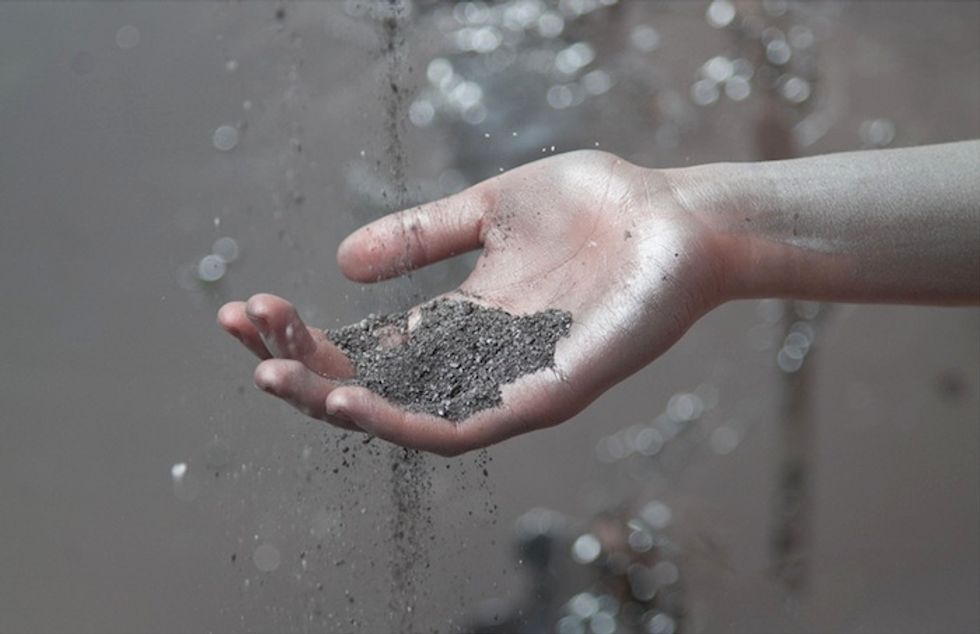 "It's a Small Art World, After All"- Everything We Saw and Heard At Last Night's Art Openings

text and photos by Kate Messinger
PAPERMAG
Yoan Capote at Jack Shainman
The NYC art world sometime feels like a very well-lit Bio-Dome, filled with a bunch of boozed-up wealthy people and boozed-up artists unaware we are existing in a contained, irrelevant, and very small environment. It's hard to see the big picture when you're so close up. In Chelsea last night, the must-see openings all bubbled on the same block, creating a regurgitation of the same crowd at each gallery and making us wonder if we had done this all  before. At least the work was distinguishable as it's own entity, each artist highlighting a world outside the art world. At Jack Shainman Gallery, patrons gathered around a collection of chemistry equipment that looked burned from a meth fire, but at closer look, were printed with images of people at a festival in Cuba. Yoan Capote's work, like a giant head of Fidel Castro made of door hinges, explores the Collective Unconscious (also the name of the exhibition) and more specifically, the way people of his home country of Cuba experience history individually and as a cultural unit.

Across the street at Zieher Smith & Horton brought us to another exploration of culture, where Elijah Burgher showed Bachelors, a series of geometric paintings on canvas of cult symbols and intimate and colorful pencil drawings of nude, young, gay men. Looking around the room some faces were almost recognizable as the men in the portraits, but on paper these men existed as eerily stoic statues, too perfect to be over-sexualized or even considered human. Just a few steps down at Anton Kern, German artist Marcel Odenbach created a dynamic atmosphere where large-scale collages existed on two levels: from a distance and up close. The images showing overgrown greenery in urban settings, or the large portrait of Tupac Shakur, look like paint-by-number renditions of photographs. However, up close you can see that the image is created from painted and collaged news clippings, comics, texts and images all documenting the civil rights movement in some way, creating a history of the larger picture in the details. It's hard to step back and see the larger picture of the relevancy of the art world when you're a small detail, seeing all the culture you need in one block. It's like that "It's a Small World" ride at Disneyland, except even more claustrophobic.

Joshua Citarella at Higher Pictures
Thinking we could get a different perspective with a trip to the Upper East Side, we stopped by Joshua Citarella's second solo show at Higher Pictures. In the small gallery, packed with a younger crowd of artists and gallerists usually seen on the Lower East Side, images and sculpture of varying layers took up almost every inch of space. Large-framed photographs hung over wallpapered images with little free space. Sculptures leaned against the frames, on the floor and in every corner, the work repeating themes of pixelated clouds, silver substances, marble and skin in every dimension. It's hard not to feel like you're trapped in a Tumblr page come to life, yet the chaos of the space is refreshing. Citarella, who is a contributor to the artist Tumblr project The Jogging, uses the layers of Photoshop as inspiration for Rez, a phonetic play of "resolution" meant to highlight "the act of uniting discrete units into a conceptual whole." In this room it's possible to see all the details that go into creating an image that doesn't actually exist, like the picture of the nude woman covered in a silver substance. The image itself is completely photoshopped, however silver fingerprints dot the edges of the frame, and the same silver substance, with more hand prints, is shown on a sculpture in the middle of the floor. In this space, being a small detail doesn't seem so irrelevant or constricting.

Install shot of Joshua Citarella's Rez at Higher Pictures
As the show wrapped up the artists piled into a cab back downtown to Beverley's, a LES bar where you can't move 5 inches without running into an artist (or anyone else for that matter). It's a place that much of the art world calls their "Cheers." Here Citarella has a supplemental installation of video work, showing a series of YouTube videos mirroring his show's themes, including a sped up video of a Rolex being meticulously photoshopped, and a wallpapered image of marble slabs spinning through pixelated clouds perfectly poised across from the bar's mirror, a somewhat intentional backdrop for the night's many selfies. Artists and friends, like painter Nick Farhi, Jeanette Hayes, and a printed cutout image of artist Brad Troemel's head (the creator of The Jogging and friend of Citarella who's traveling and couldn't make it to the show), come to celebrate. It is a small art world, after all, but at least everybody knows your name.