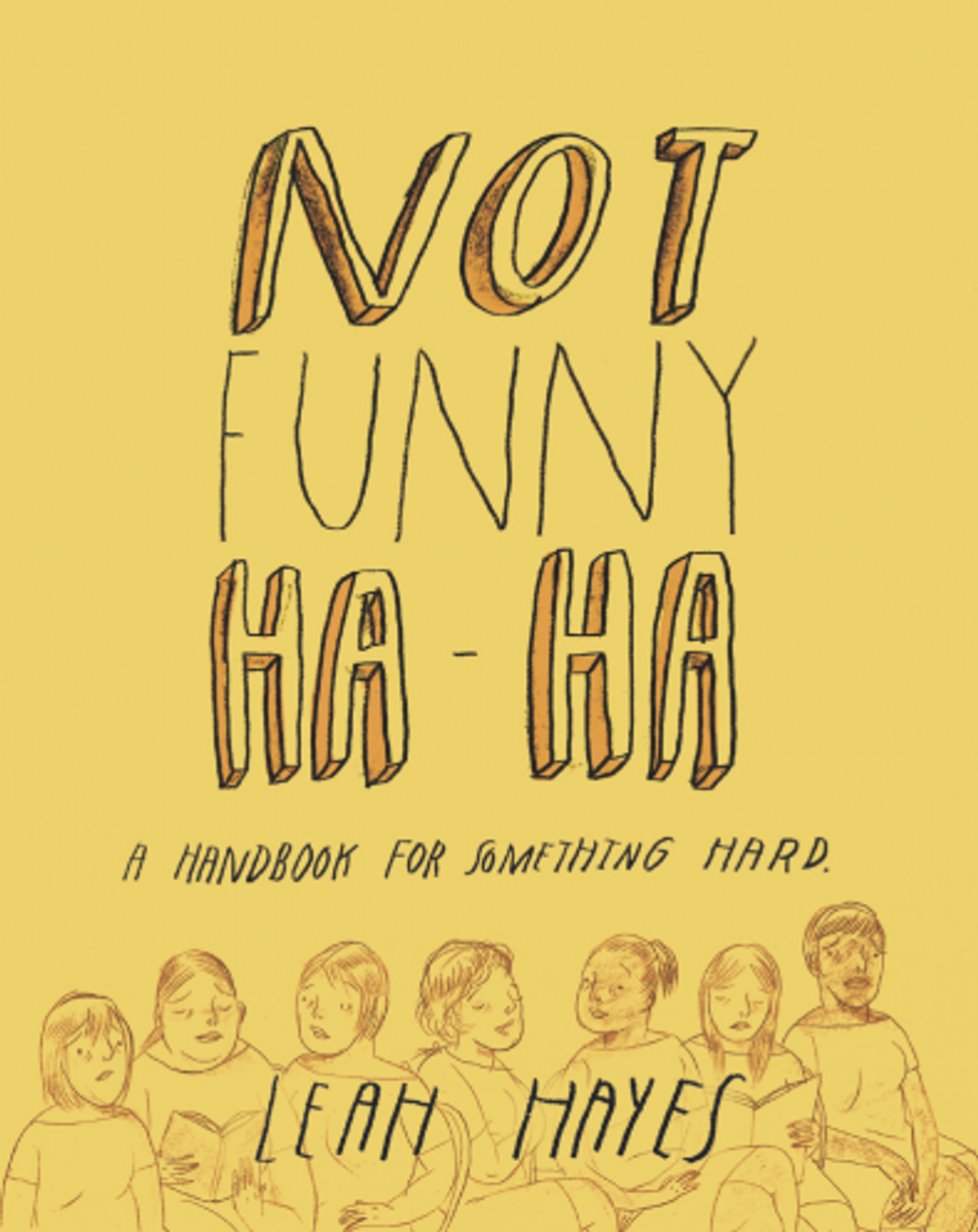 "It's a Non-Judgmental Book": Graphic Novelist Leah Hayes On Her New Comic About Abortion

by Brian Heater
PAPERMAG
I first discussed Not Funny Ha-Ha with its author Leah Hayes at San Diego Comic Con, an odd place, perhaps, for the soft launch of a graphic novel dealing with the topic of abortion, but Hayes took the teaming throngs of costumed cosplayers in stride. The cartoonist happily engaged with interested parties, listening to personal stories and discussing her own motivations for tackling such heavy subject matter in comics form. Since then, the book has, perhaps unsurprisingly, garnered a fair amount of press from big outlets, with most praising the thoughtful and measured way the artist addresses the extremely sensitive issue. Hayes takes care to tell the story from two points of view, highlighting different procedures in different circumstances, while paying close attention to the processes that often get left out of broader discussions.

I caught up with her right as promotion for the Fantagraphics title enters its full swing, to discuss both the practice of creating the book and the act of interacting with readers while promoting such a deeply emotional work.

When we last spoke you were starting to hear a little feedback from a few people who had seen the book. Now it's everywhere.

It's been amazing. It's such an honor. I'm so happy people are reading it. I've been very surprised and very moved by people's responses. I'm very happy that people at this point are responding to it in a way that's in keeping with the intent of the book. There's been a lot of really nice reviews understanding the overall picture and the tone I was trying to put forth. I was afraid that people would misunderstand.

How would you describe that tone you were trying to cultivate?

My hope was that people would understand that it's a non-judgmental [book]. It's not trying to tell anyone what to do or say what's right or wrong about abortion. So far people are picking up on that. There's some really intense pro-life websites out there that are going kind of nuts about it, but it's to be expected, and I was definitely bracing myself for that anyway. I have a feeling a lot of pro-life sites would have a problem with anyone writing about abortion, no matter how understanding or open you can possibly be. They're just going to get upset about the subject. I'm just excited that anyone's reading it. And any publicity is an opportunity for it to get in the hands of some women or men who might need it.

What are you hoping it provides for readers?

I really hope it provides people with a sense of connectedness with each other during what can feel like an isolating procedure. I hope it opens up the on-going conversation about abortion in general a little more. I hope it inspires other people to write or draw or express themselves about other things they've gotten that have been hard. I've gotten amazing responses from people who have not had abortions but have described the difficult situations they've gone through.

Abortion is one of those subjects that everyone discusses in broad terms, but people seem to rarely discuss the procedure itself.

I was noticing that a lot. And when I went to write the book, I didn't set out to be any sort of an expert on the subject by any means. But when I started writing it, I was looking around to see where all of the abortion creative outlets were, and I didn't really see any. There are certainly graphic novels out there that are about really tough things -- the Holocaust, being gay in the world or surviving an Iranian revolution. There are all these incredibly novels and pieces of art, but I didn't really see much about abortion.

The visual element seems incredibly important for your ability to tell the story you wanted to tell, to have the procedures be such a central part of the narrative.

A lot of people have asked "why comics?" I've been drawing comics my whole life, and that's just my form of expression. If I was a fine art painter, I probably would have done a painting about it, too. I like drawing things that are emotional. But I'm more at ease drawing weird emotional things than I am drawing practical, medical things. I really hope I did justice to the medical stuff I drew. I researched a lot and drew from experiences. But that was the part I was the most nervous about.

The story is told through the experiences of two different women. Was that an attempt to make the story a bit more universal for the reader?

You spent all of that time immersed in this incredibly heavy subject matter. You got a bit of a break after you finished the book, but now that you're promoting it, are you back in the headspace again?

In a way I am. The subject matter is always heavy. It's serious. And now it feels like there's a responsibility that comes with writing about anything medical and emotional. I am sort of reliving it. And people's reactions, coming up to me and telling me what they went through is super moving, but hard. I feel a sort of responsibility to be representing my own feelings correctly and any medical information responsibly and letting people know again and again that I'm not a doctor. I don't want any girl or guy to read this and not go to a doctor or talk to a clinician. That's my worst fear.

Has the process of finishing and promoting the book impacted your own thoughts and feelings about the subject matter is any sort meaningful way?

Finishing and promoting the book (or seeing it go out into the world) has impacted how I feel about the topic itself, yes. I already felt that abortion was a huge, complicated, sensitive issue but it's humbled me even more hearing the response from girls/women/men who have responded to me and shared their own experiences with it.

Not Funny Ha-Ha comes out via Fantagraphics on August 8th; pre-order a copy HERE
Fashion

This Beer Campaign Is Fighting the OnlyFans Sex Work Stigma

Cardi B Will Pay for Bronx Fire Victims’ Funerals