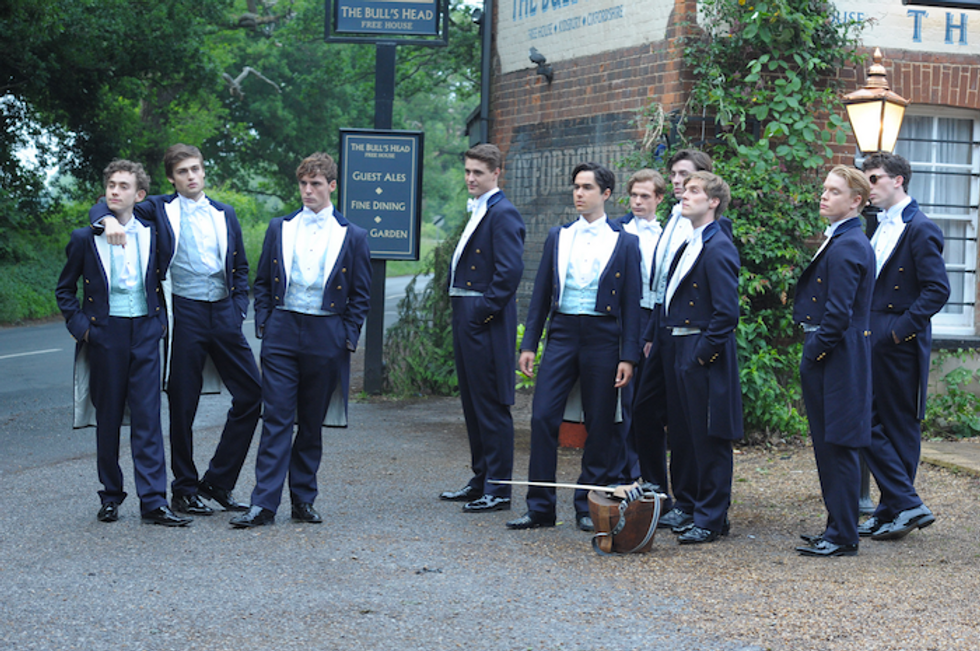 "It Gets Your Blood Boiling": Max Irons On His New Movie, The Riot Club

by Abby Schreiber
PAPERMAG
[Photo by Joe Schildhorn/BFAnyc.com]
Trigger warning: The Riot Club might make you want to scream and rip your hair out. In a good way. The new movie, directed by Lone Scherfig and based on Laura Wade's play Posh, stars Max Irons, Douglas Booth and Sam Claflin, among others, as Oxford students who belong to the film's eponymous social club, said to be based on the university's real-life Bullingdon Club. It's a study of privilege, ego and what happens when spoiled brats with too much money and too little compassion decide, in the name of tradition, that they're entitled to have some fun (which, in this case, means wreaking havoc on a country pub, vandalizing the establishment and terrorizing the owner, among other offenses). In its excess and cringe-inducing scenes of violence and vulgarity, the movie offers a sharp critique of the entrenched systems and classism in some of the world's most esteemed institutions. While it's set in the UK, there's obviously much that's applicable in the States and elsewhere.

As new member Miles Richards, Irons (son of renowned actor Jeremy Irons) plays the one character with any sort of conscience -- even though it doesn't always override his desire to be accepted into the group. His evident unease with his fellow club members' antics mirrors the discomfort the audience feels and, while he's not exactly blameless, he's the one guy you're left rooting for. We had the chance to speak with Irons, who's also appearing in Woman In Gold, and hear his thoughts on shooting some of the film's most difficult scenes and how the movie opens our eyes to the messed up justice systems in the West.

After I finished watching The Riot Club, the only thing I could think of was "whoa..."

That's why I'm attracted to it. The first time I actually read the script I didn't want to do it, I thought it's too unpleasant and it gets your blood boiling too much. But then, I sort of realized the importance of it, and the idea of a double standard in justice that's sort of inherent both here in America and England. And to think that the club that we were heavily influenced by was attended by three of the most powerful political figures in English politics. [Ed. note: That'd be Prime Minister David Cameron, London Mayor Boris Johnson and Chancellor of the Exchequer George Osborne.]

How familiar were you with the Bullingdon Club before getting the script?

Well a lot of people knew about the Bullingdon Club, but members are quite secretive about what they got up to, so when people who were in it are asked about it they tend to just say "oh it was a time in my life, I was very young", and that's all you get. There was this famous photograph of George Osborne, Boris Johnson, and David Cameron all on the steps, dressed up in their Bullingdon Club outfits but that's all we sort of knew. But we managed to do some research, interview some people, and we were shocked to find out that our film wasn't exaggerating at all! It's frightening to think that the people who set our moral standards in our country associated themselves with those values.

A still from The Riot Club. [Courtesy of IFC Films]
Did you know or had you worked with any of your fellow castmates before?

I knew quite a few of them like Sam Claflin, Doug Booth and Freddie Fox. The English acting community today [is small] and, remember, we're all male and of a similar age so we're all competing for the same parts. You're aware of each other. But they're a lovely group. I was always nervous about the potential for competition or showboating or 'alpha males' but there was none of that. We all knew the film we were trying to make and the importance of working together to achieve it. So, yeah, it was a really, really nice experience.

When you were shooting some of those wilder scenes, was it hard to break character and go back to normal with one another after you've been playing these despicable people?

None of us are method actors, so we could turn it off once they called cut. What would quite often happen is you would, at the end of the day, find yourself in quite a bad mood. There was one particular day where Sam Claflin had to give his monologue, which peaks on the quote "I fucking hate poor people," and, you know, a shot like that takes all day to film, so you're hearing this horrible, nasty, vile speech again and again and it does get into you.

What was the most difficult scene to shoot?

I thought the scene with Holliday Grainger, where she comes into the club and she's forced to kiss people. That scene was pretty unpleasant. She's such a great actress that it really affects you.

The timing of the movie seems particularly appropriate, especially in this country, because issues like sexual assault on campus and fraternity culture -- as well as broader ideas of justice, inequality and privilege -- are really being examined and discussed right now. Were you thinking about any of these larger topics while you were filming?

Well something that happened in the lead up to this, which was also quite topical because of the name of the movie, was the London riots. We had a lot of angry, young, disenfranchised kids [rioting]...and I believe some people just said "oh these are just kids going wild and seizing the opportunity to steal a free TV or some shoes" but in fact I believe it was a collective, almost subconscious outcry that a lot of inner-city kids feel that their opportunities and the hopes and dreams that they have aren't [turning out] as they'd hoped. So they went wild, and they were branded very quickly and without any hesitation by our politicians as thugs, hooligans, and animals. These are young kids, 16/17-year-old kids, difficult backgrounds, and as opposed to looking at what may have caused this, [the public] just looked at what these kids were doing and branded them. And you know, then you look at our Prime Minister, and our Chancellor, and our Mayor, and you see that in fact these guys were, according to documented events, doing the same thing, at a more discerning age, having been afforded all the privileges available, and they get away with it because of who they are and because of the money they have. There is a double standard of justice you see both in England and in the States: if you have the money, if you have the name, you can get away with things that other people can't, and I think it was good that our film drew a little attention to that.
You May Also Like
Internet Culture