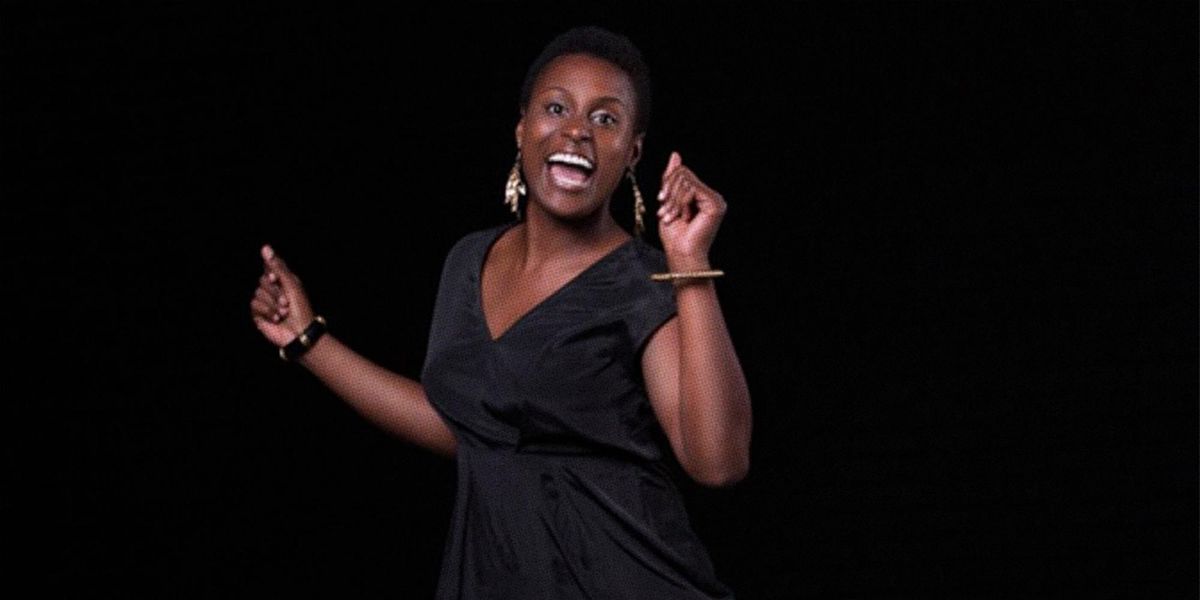 In our new PAPER cover story, not-so-insecure industry powerhouse Issa Rae tells Tracee Ellis Ross about what she's learned from her entertainment career so far, and why she's betting on herself going forward. But this isn't the first time we've sat down with Rae. In this more low-key interview from 2012, she tells PAPER about creating Awkward Black Girl, the web series that started it all.

"My name is J. I'm awkward and Black. Someone once told me those were the two worst things anyone could be." That's how Issa Rae — as her acting alter ego "J" — launches into the first episode of her web show, The Misadventures of Awkward Black Girl. The over 1.4 million people who have watched that premiere since it first hit YouTube on February 3, 2011, would probably disagree.

In just a year-and-a-half Rae finished the 12-episode first season of ABG, started on season two after partnering with Pharrell Williams' i am Other production company, and continues to work on other projects like the hilarious RATCHETPIECE Theatre. (What's ratchet? Here's Rae's definition: "It's like if ghetto and hot shitty mess had a baby, and that baby had no father and became a stripper, then made a sex tape with an athlete and became a reality star." Seriously, go watch it.)

We caught up with the LA-based Rae in New York, while in town for the preview screening of ABG's newest episode.

Tell me how you came up with the concept for the series — did someone really tell you that being "awkward and Black are the two worst things anyone could be"?

Yeah, it was a joke though — it wasn't a life-changing experience. I've always been writing and have always been an avid TV watcher. There's a specific type of quirky, observational humor that I've always liked (on shows like The Office, Seinfeld, Curb Your Enthusiasm), and I wanted to bring that to a character that I felt like I could relate to. There were never any leads of color who were like me, who had personality traits like me, like "Oh my god, I go through this, or Yes, I get her, I understand her logic." So I wanted to create that character and I just meshed the two together.

I knew I was Black for a long time, but I realized I was awkward just in the middle of the day. I was sitting in my bed, in my small closet-apartment in New York, and it just came to me. And I wrote in like a Facebook [text] box, "I'm awkward and Black," and my friend who is on the show now, she wrote, "Haha those are the two worst things anyone could be." I thought it was funny and then when writing the show two years later, I was like, "Oh OK, that's a good line to open it. That's something the character would say."

Any other favorite shows?

I love Arrested Development; I could watch it every single day and learn something new. I still love The Office, I love Community, Parks and Recreation, Seinfeld is huge, Curb Your Enthusiasm. That's my comedy canon right there. And drama, I love Scandal, Dexter...

How much of you and what you've experienced is present in those ABG storylines?

They're mostly exaggerated situations that I wouldn't want to go through. Like I put the character through all the stuff that would make me cringe. But a lot of the characters are based off of either encounters I've had, or people that I've met. They're all different archetypes of my pet peeves.

Like Boss Lady is loosely based off a sixth-grade teacher I had who was really, really nutty and was a white woman who taught a predominantly Black class who needed to show that she was "down." So she used to always ask questions about my hair. She asked if I wore it a certain way to honor my ancestors. She was really, really a bizarre lady — we had a mixed girl in our class and she asked her in front of the entire class, "Hey, you're mixed, right? "The girl was like, "Uh, yeah. Like Black and white? "And she was like, "Oh okay, because my boyfriend is Black and I wanted to see what our kids would look like."

In the sixth grade I remember thinking, This is weird.

When did you realize ABG had become a hit?

I was just putting it out there; I knew that my friends would find it funny, and my family, because we share that sense of humor. But I started getting letters and stuff around the first episode of people saying, "Oh my god, this is so me, and Oh my god, I'm so glad that a character like this exists, I really hope this makes it to TV."

How does funding work for the show?

Kickstarter funded the rest of Awkward Black Girl, season one. Season two is funded by Pharrell Williams' i am Other. And I'm still doing a lot of low budget stuff but I am able to revenue from YouTube partner programs. I just joined with a new network, Full Screen, which helps to integrate sponsors and ads. And merchandising through ABG has been fruitful. So I use all of that money to just put back into the shows.

Before Kickstarter and i am Other, how did you fund ABG?

I didn't. I have really, really good friends who are just great and were able to lend their time and volunteer. The crew was amazing, just doing it for minimum money. So that's why Kickstarter came in handy, to give back pay and to actually compensate them for their time. The first episode cost me $25, to buy lunch for my two friends.

Do people approach you often with their own awkward stories?

Every single day, yes. Some of them aren't even awkward though. Unfortunately I can't take anyone's ideas for legal reasons, but yeah all the time.

Oh my god. We had a contest, Show Us Your Awkward, so people could submit stories and we would actually put them in the show. So this one girl submits a video of herself telling a story about how... this is kind of explicit.

She wins the award for Worst Person Ever. She was talking about how she and her boyfriend like to use food in the bedroom. And they wanted to experiment with ice cream. So she said her boyfriend put his junk in this ice cream, and whatever they were done, and she put the ice cream back in the fridge. She says her mom comes home and was like, "Oh I want some ice cream." And she goes in the fridge and she's like, "Should I stop my mom from doing it?" And she doesn't stop her mom from eating this penis ice cream. And she was like, "Awkward!" That's not awkward, you're a horrible person.

Are there new characters this season? Anything you can tell us?

There will definitely be some guest appearances. We're incorporating some other celebrity directors in the latter half of the season. There are definitely going to be new characters, nothing I can say right now, but we're going to explore more of the family and friends of "J" and "White J."

When did you decide that film production was for you?

When I saw Love & Basketball. Oddly enough, it made me write my first screenplay. I knew I wanted to go into television early on. In sixth grade I wrote... do you remember, Bill Cosby had his own show? He had a show on CBS [called Cosby], and for some reason I felt like I could write for that and submitted my script. And of course it was horrible, but my grandmother saved it and it's just so cringe-worthy.

But film specifically, I knew when I saw Love & Basketball because it was done by a Black director. She wrote it, she produced it and it was set in my neighborhood. And it wasn't like "a Black film." It was just, two people are in love. It's not about the struggle, it's not about drama, they were just normal people. And I was like, "I want to tell stories like this, where it doesn't matter what race someone is, we're just being." That really inspired me to do that.

Do you see filmmaking in your future?

I would love that, for sure. That would be my end goal. But I'm also very impatient and film takes a long time.

Are there any filmmakers, directors, or television writers who you really look up to?

Shonda Rhimes, 100%. She's awesome and running the game — she has very much stayed true to her original vision, which is very inspiring. And I do look up to Larry David and Jerry Seinfeld because I really appreciate their aesthetic and they're hilarious.

Do you ever get asked to do a gangsta rap on the spot?

All the time. Everybody always ask me to rap. Like I'm not that great and I usually start under the influence of alcohol, so when you ask me to do it cold, it's nerve-wracking but I do it.

Can you do one right now?

You knew that would be the follow-up question.

[Vanessa Anderson, Rae's publicist: Are you about to rap?]

Photos courtesy of i am Other