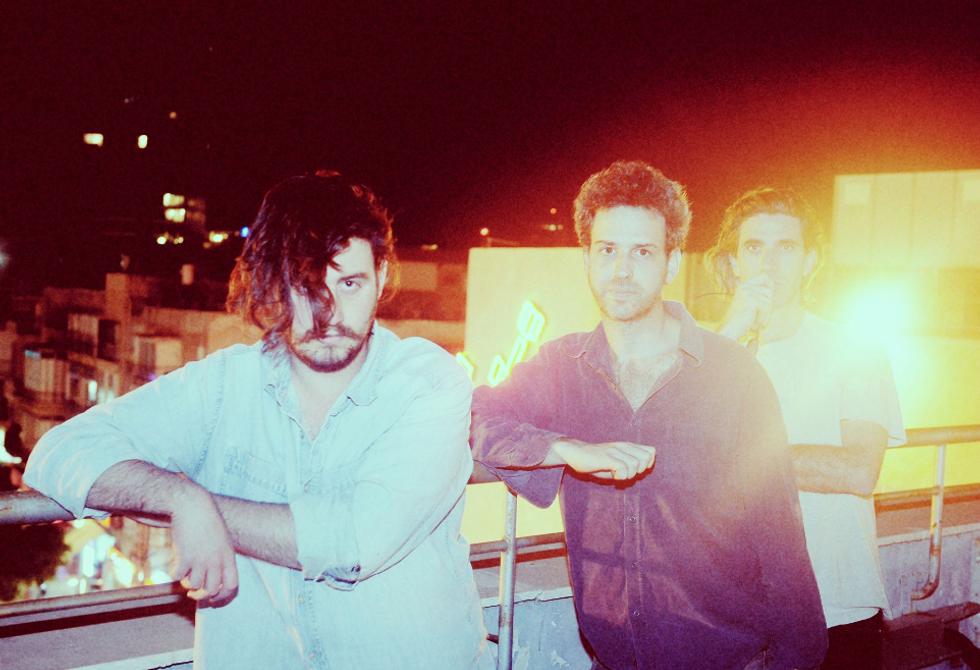 (Photo by Goni Riskin)
You don't need to speak Hebrew in order to understand The World is Well Lost, the debut album by Tel Aviv trio Vaadat Charigim; the roaring guitars, subdued vocals, and eerie segues evoke a world careening toward its own destruction, populated by everyday people who still manage to think about clothes, art, and love. And the fact that Spin and Pitchfork have already featured songs from the album suggests that American listeners are getting the message.

Singer and guitarist Juval Haring (who clued us in to the Tel Aviv music and nightlife scene in "No Sleep 'Til Tel Aviv") was nice enough to walk us through the album's ravaged landscapes, translating the occasional line and adding some backstory along the way. Skyping from Tel Aviv, Haring also shed some light on the group's decision to sing in Hebrew, the unique challenges Israeli bands face, and his years as a Berlin expat and international road dog. So cue up the album, out now, and follow along.

"Odisea" (Odyssey): This is the most post-apocalyptic song on the record. It sets the tone for the rest. It goes over certain monuments in the city of Tel Aviv -- Dizengoff Center (a famous shopping center from the eighties), Tachana Merkazit (central station) -- and envisions them destroyed and asks questions like, "What will I wear in the next war? What's fashion going to be like?" It also suggests that we should "live today like it were yesterday," if all we have to look forward to is "dying in a blast wave." The chorus lyrics say "Ana ana ana ana nashki oti besof haolam," which means, "Please please please please kiss me at the end of the world."

"Kezef Al Hamayim" (Sea Foam): There's a big feeling in Israel that things are temporary. Even though from the outside we seem very sure of ourselves and our presence here and everything, the youth -- and also my parents' generation -- are slowly losing that belief that something could last forever or last in the ideal way that we saw it before. Sea foam is an image of something that disappears slowly, and the song is about fleeting things, fleeting people.

"Lehitorer Velo Lada'at" (Waking Up and Not Knowing What's Wrong): It's about waking up and not knowing where you are, what time is it, what day it is. Feeling lost.

"Ze Beseder Lefahed" (It's Okay to Be Afraid): A conversation between a guy and a girl -- "Let's become nothing together; let's run away and disappear." I've had that kind of conflict living in Berlin -- it was like leaving the real world here in Israel and moving to a place that's safe for young people to not do anything or do whatever they dream. It's kind of like disappearing, in a way.

"Haolam Avad Mizman" (The World is Well Lost): This is kind of like "the hit" in Israel. [Laughs.] The world is well lost but let's lie on the beach and have fun and fall in love because it doesn't matter. We can just feel whatever we want.

"Ein Nehama Ladoachim" (There is No Comfort for the Fading): That song is kind of about growing up as a promoter in Tel Aviv and watching the scene changing and realizing it's not the same as when I was young -- but maybe it is and I'm just older and maybe I don't know anything. I used to organize a lot of shows on rooftops and that disappeared. And we don't have basement shows like they do in the States. We have bomb shelters, but we don't have basements.

"Kmo Lahzor Habaita" (Like Going Home): It's about living in a city and you love living there but you come from the suburbs, which sucked when you were young, but when you go back, you get sad for some reason. I like my life in Tel Aviv and I really don't like the suburb I come from. But then again, maybe I just don't like thinking about myself when I was there or thinking about or where I am now. The gap between the two is kind of terrifying.

"Mahshefot" (Witches): This is a reference to a band that used to be in Israel. It was a phenomenal girl band. I always try to reference Hebrew rock, you know? So that was a song about the lead singer.

Tell me about the decision to exclusively sing in Hebrew.

There's been 10 years -- if not more -- of bands singing in English and trying to mirror the trends that are happening overseas. I wanted to make a record that hasn't been made in Israel in a long time -- a UK-sounding Hebrew rock album. I wanted to do a new-sounding Israeli record, for Israeli people, who know the history.

I had a Nirvana band when I was 15-16 years old called Delirious. Then I had a post-rock band that actually did pretty well -- just like Vaadat Charigim's doing pretty well (you don't sell anything but you get appreciation). And I toured the States with this band, Lebanon, at least four times. Then I had TV Buddhas. I went from having total financial failure since tours are totally expensive if you don't come from the States, to touring with my wife, Mickey Triest, as a duo in Europe after realizing that they actually pay money there. And then we just stayed in Berlin and toured and the money from shows was the money we ate from. That went on for four years. And then about two years ago I started Vaadat Charigim when the touring became too much for TV Buddhas. [Mickey and I] were suffering as a couple as well. We didn't have day jobs because we couldn't speak German.  I didn't expect to go overseas with a Hebrew project like Vaadat Charigim but we've gotten good reviews, press that I didn't get with any other project I had in English, and I'm really considering getting back on the horse. I'm addicted to it, as you can see.

Do Israeli bands ever tour the Arab world?

To tour the Arab world would be amazing. We could just go to Egypt or Jordan, but we couldn't play there.

It feels dangerous. "Hi, we're from Israel," you know? "Some of you probably don't like us." I'm not generalizing, but we don't have the best image there.

You've played New York before, and you'll be here again after South by Southwest. Any NYC stuff you're looking forward to?

I know a lot of cool people in New York, like this band Shellshag. I really enjoyed Don Pedro's, if that's still around. I really like New York. I lived there for three years when I was little. We lived in the Bronx, in this monster apartment building complex. I tried looking for it once, but I got depressed driving around the Bronx.

Vaadat Charigim will play Pianos on March 23rd. The World is Well Lost is available here.