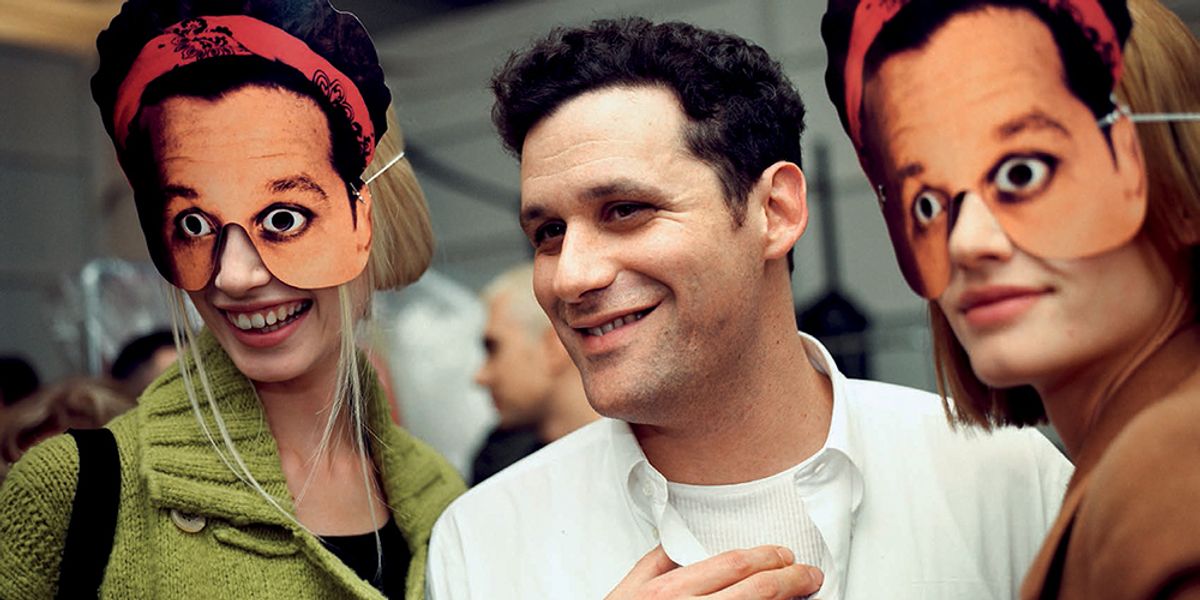 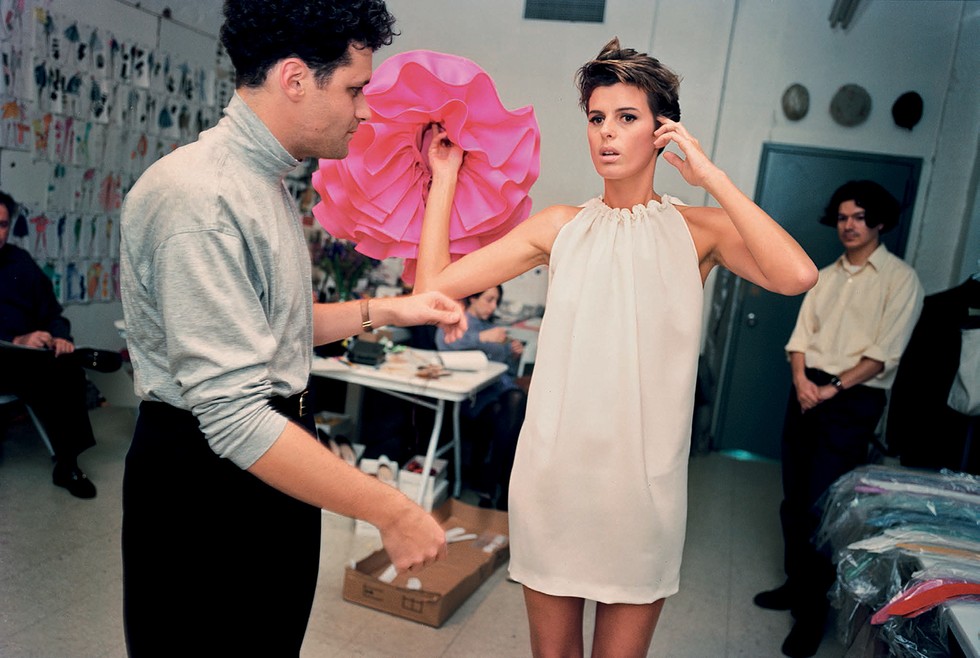 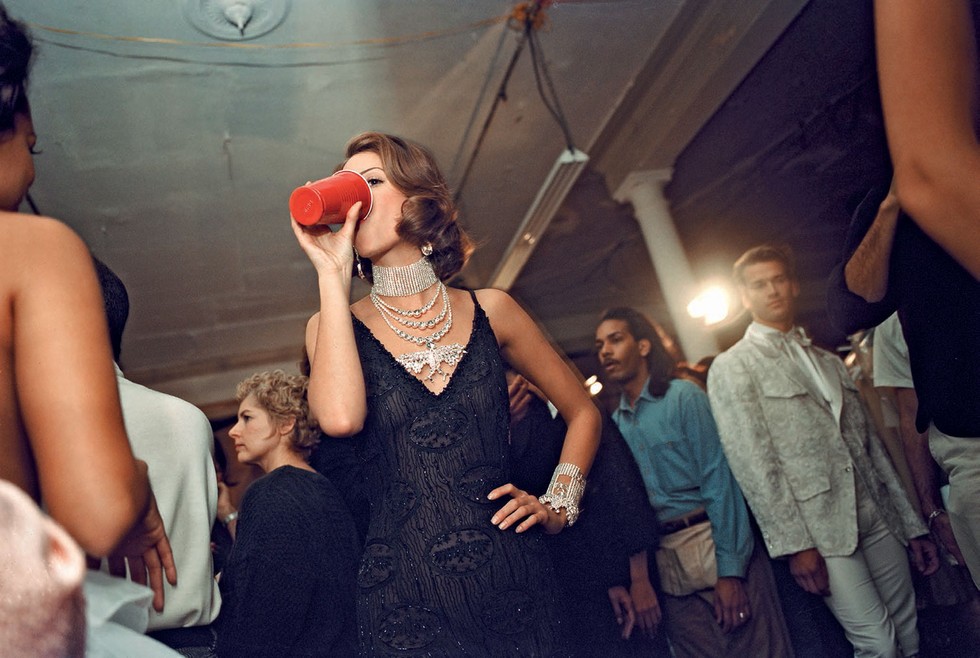 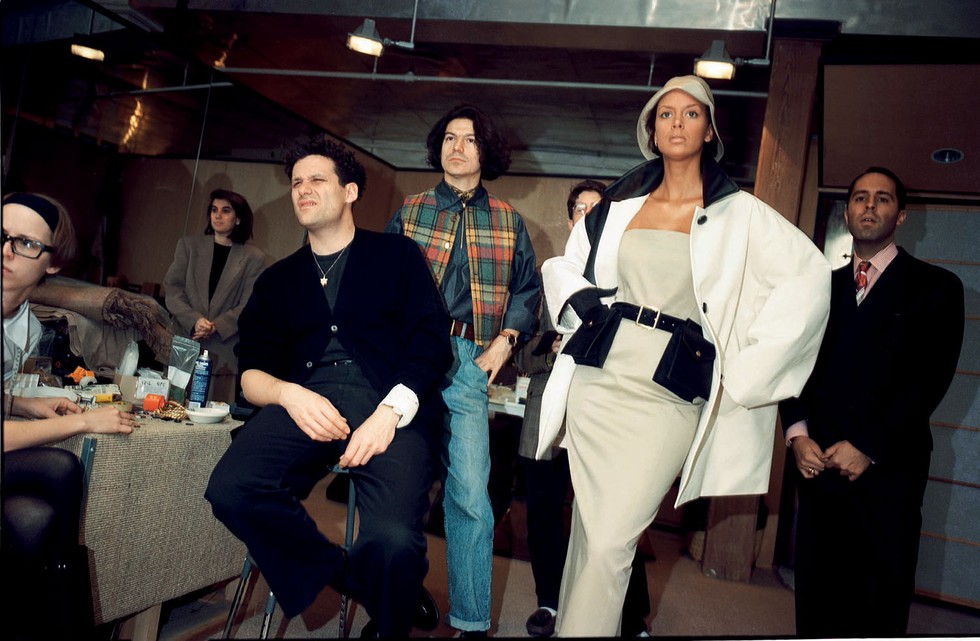 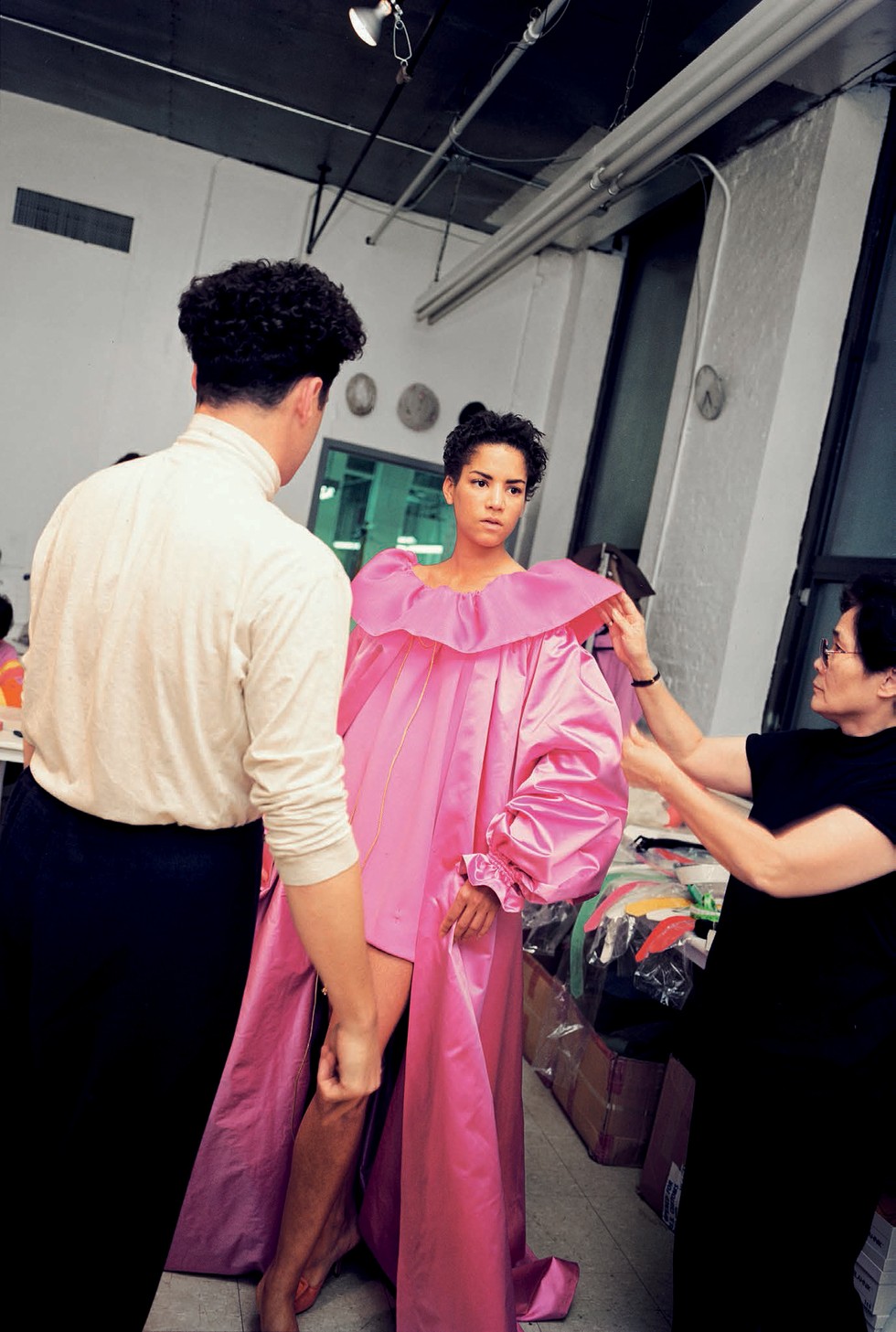 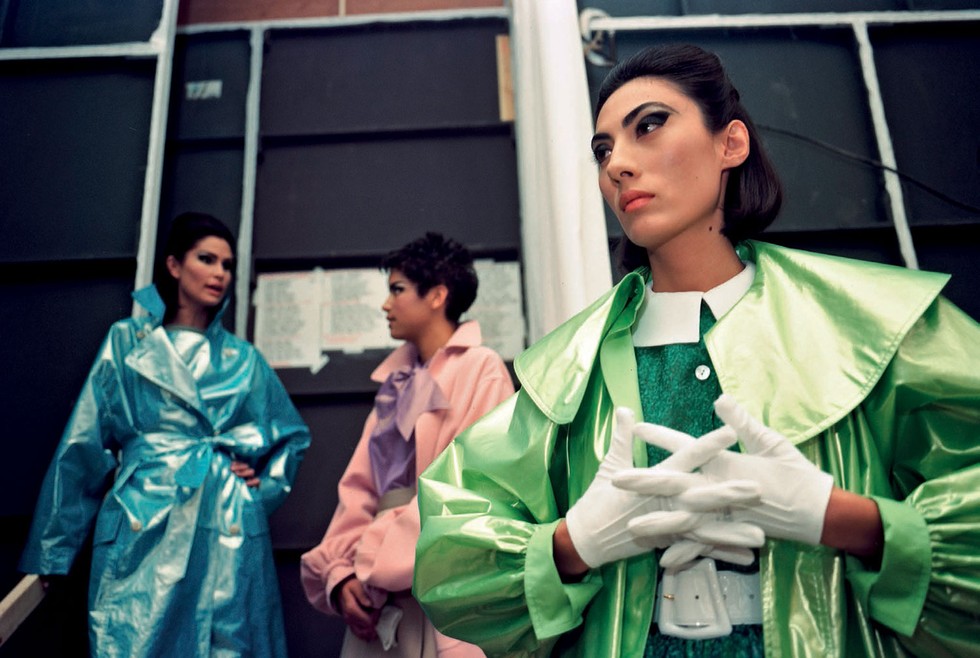 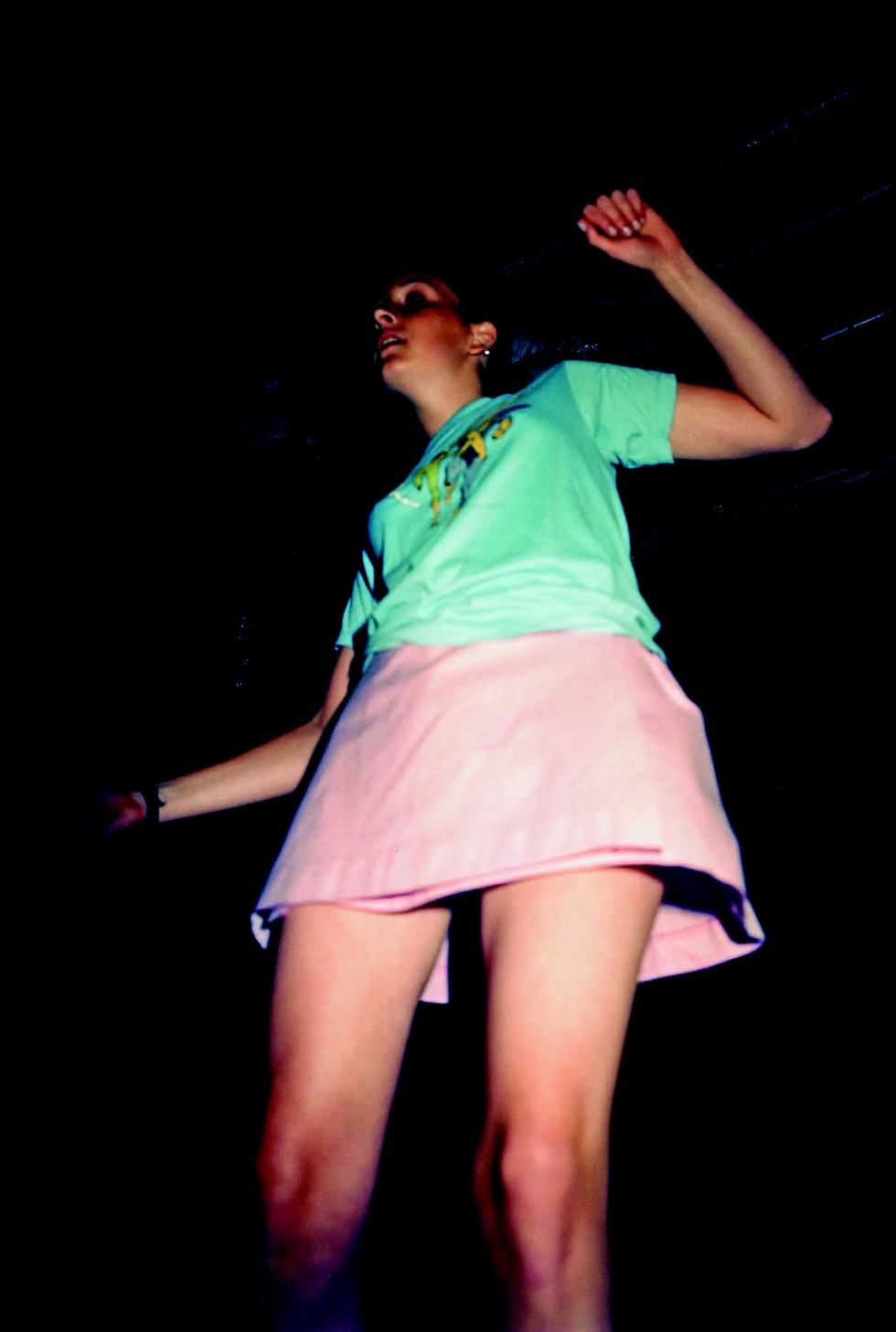 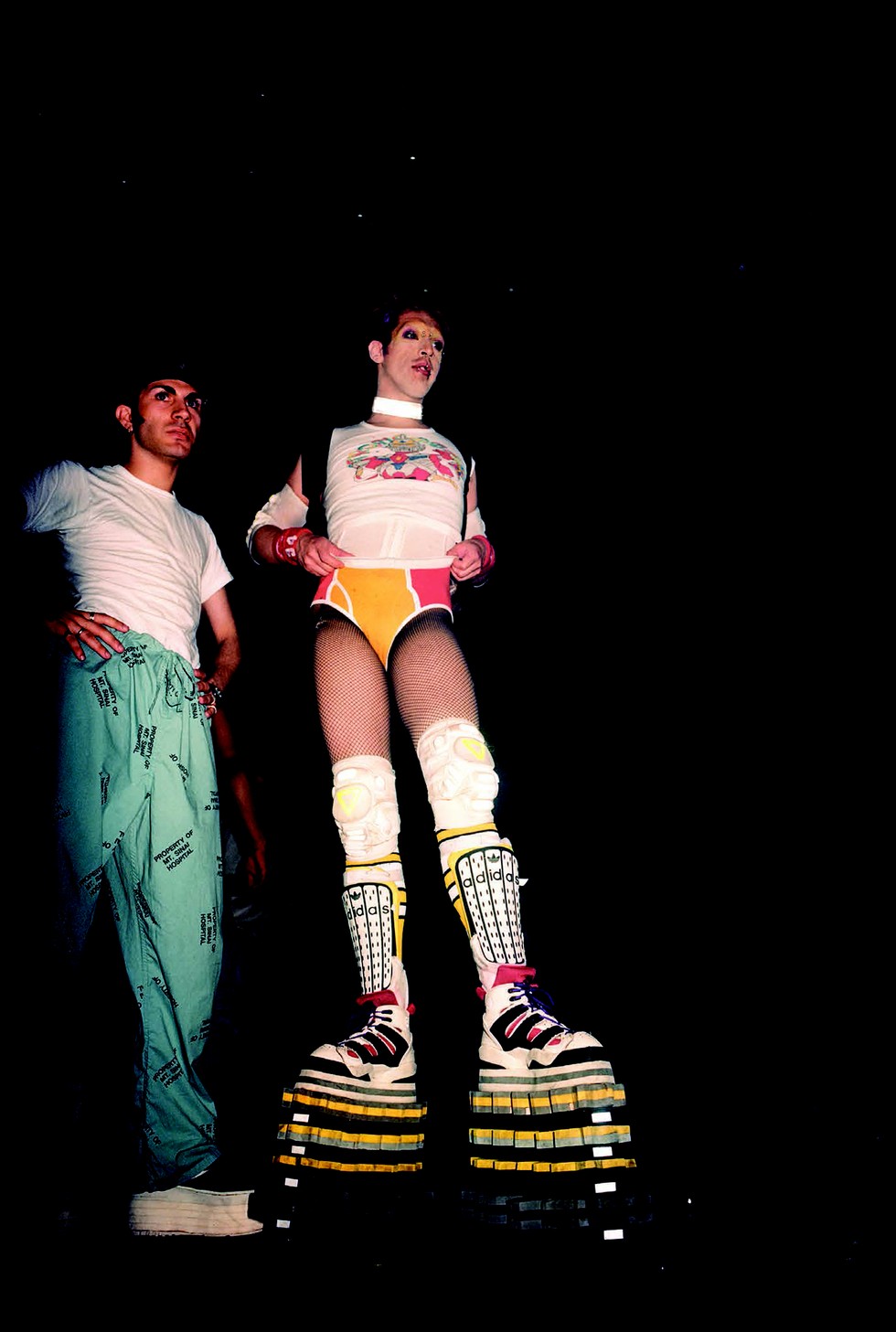 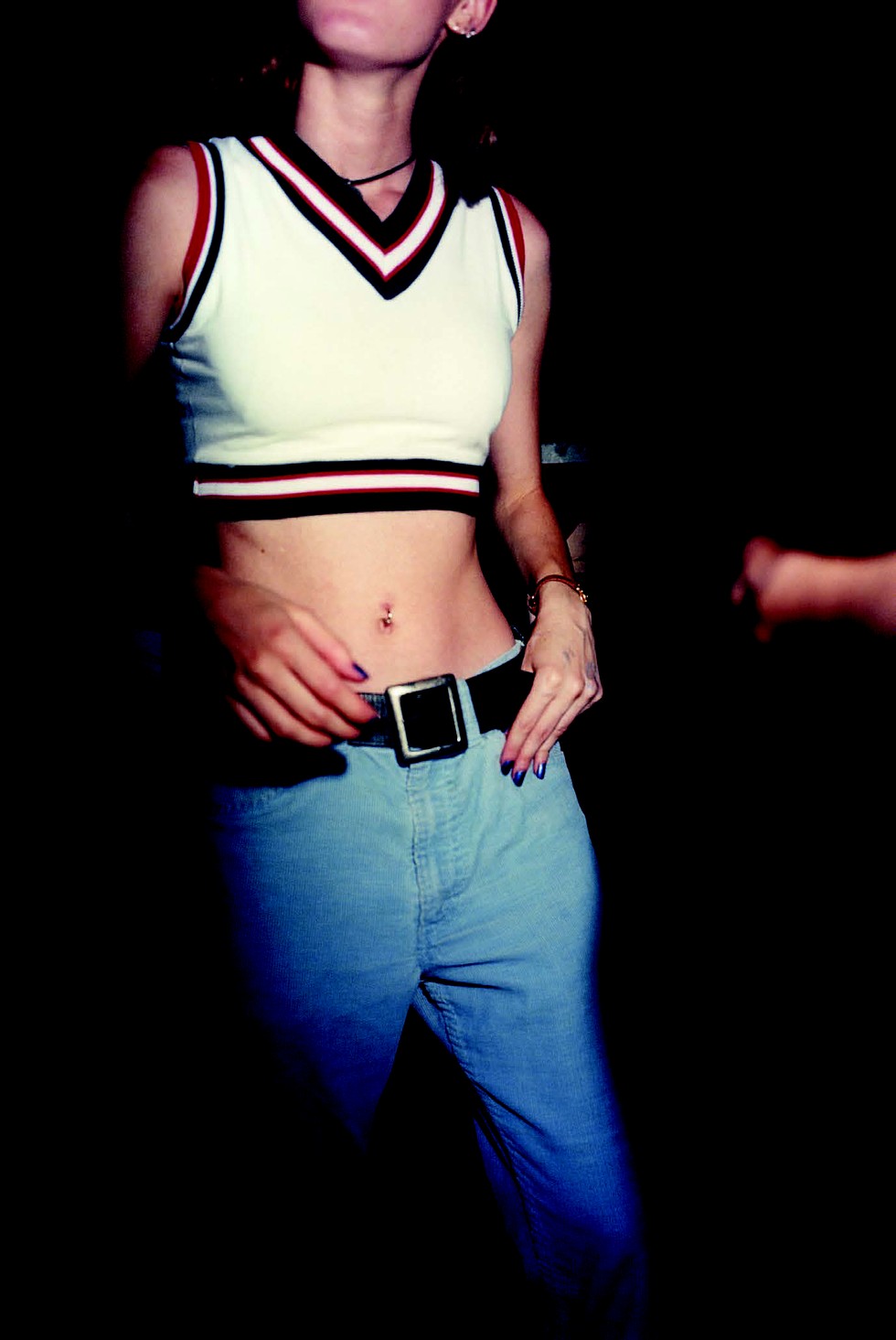 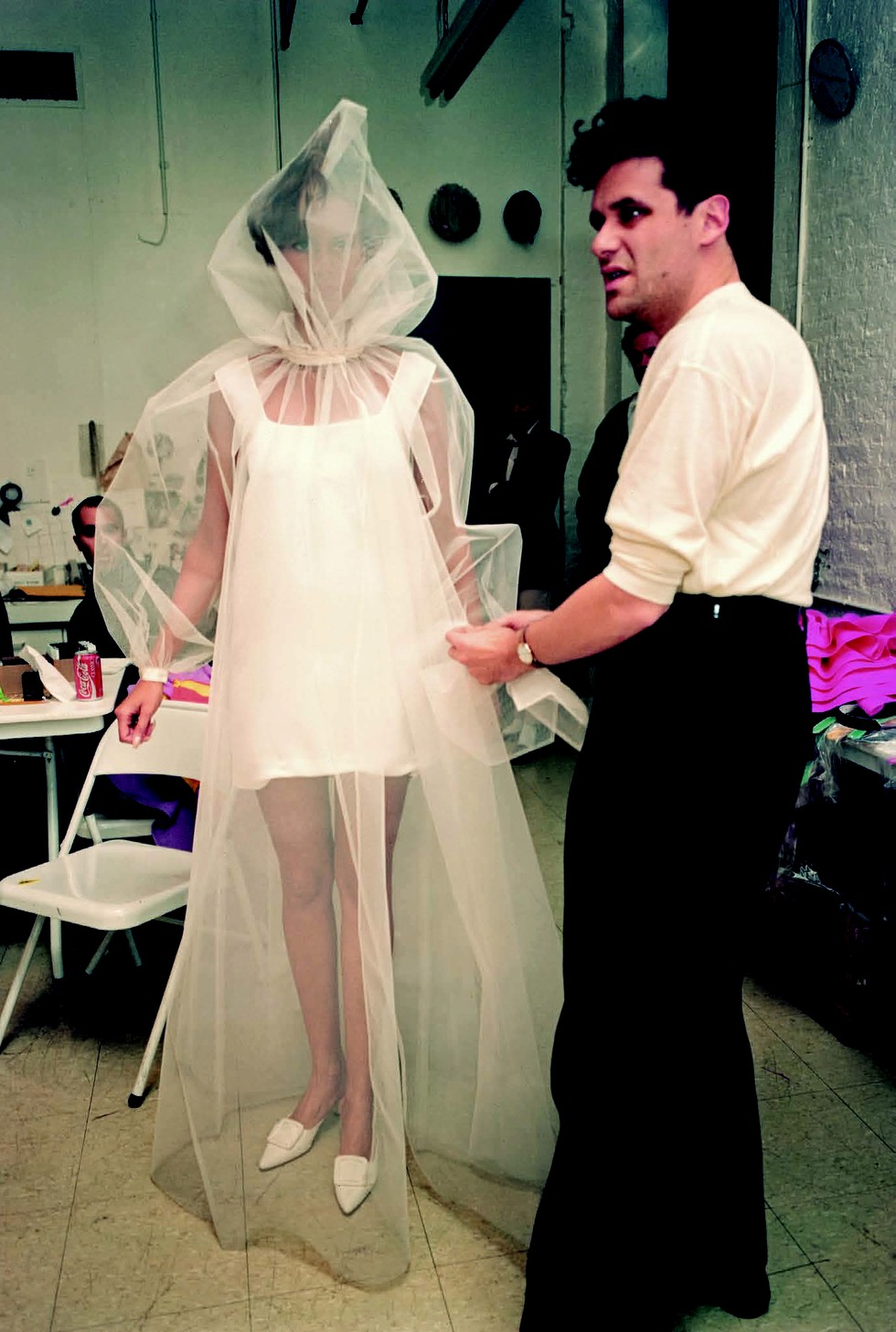 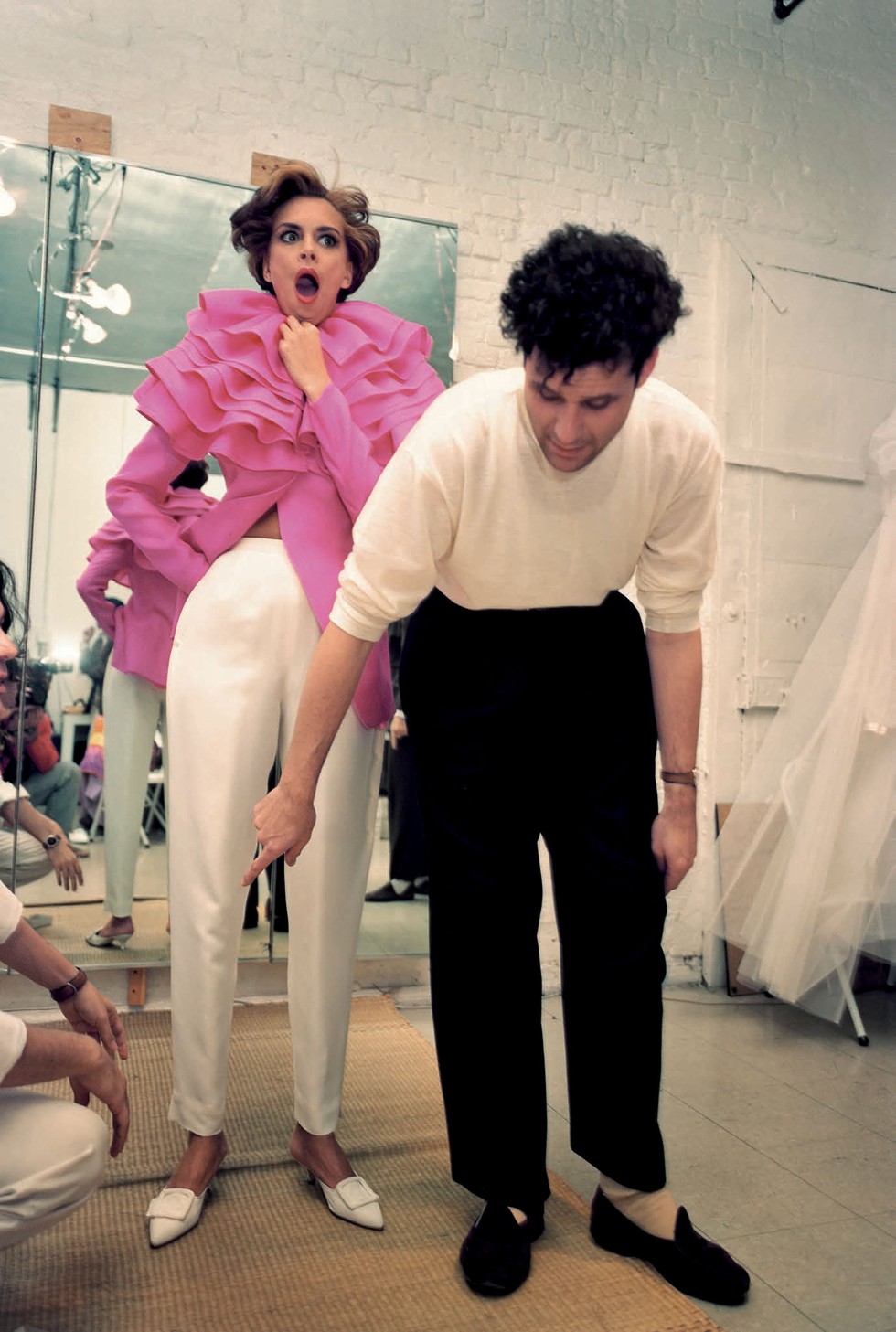 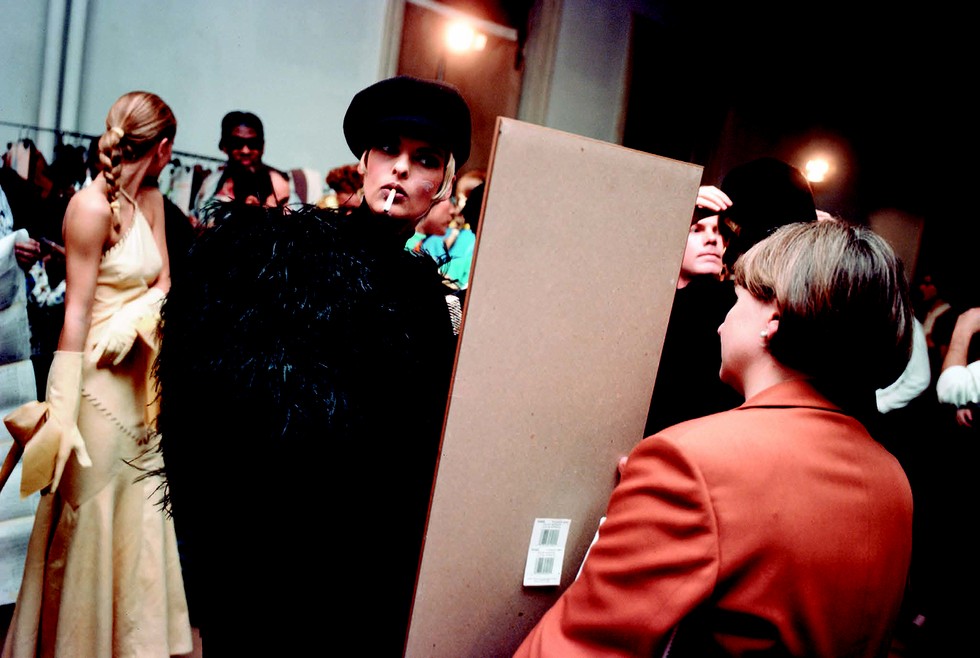 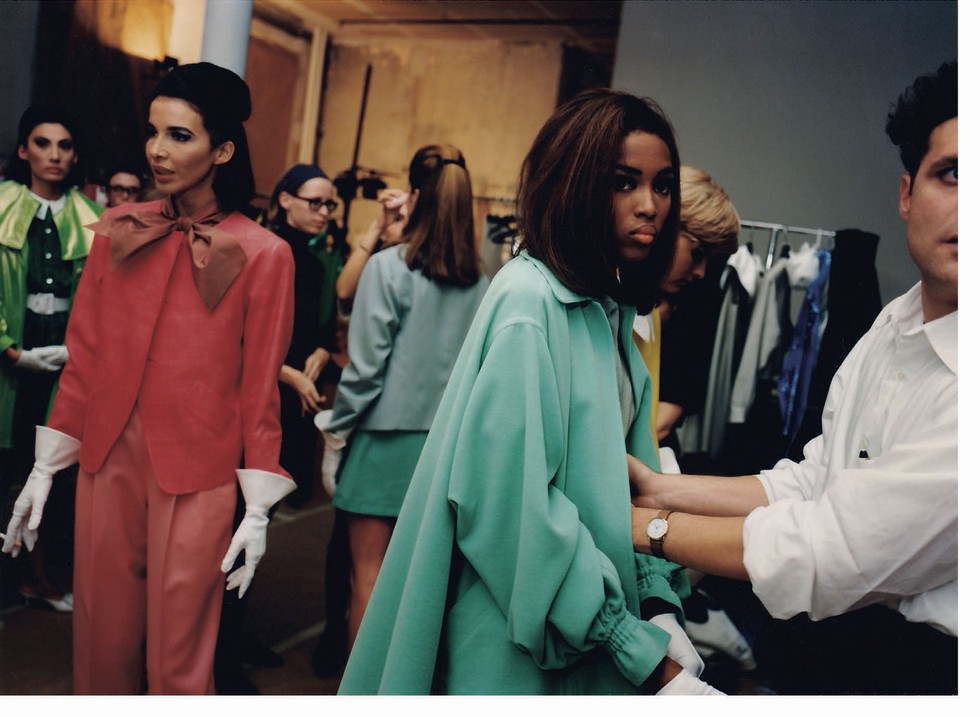 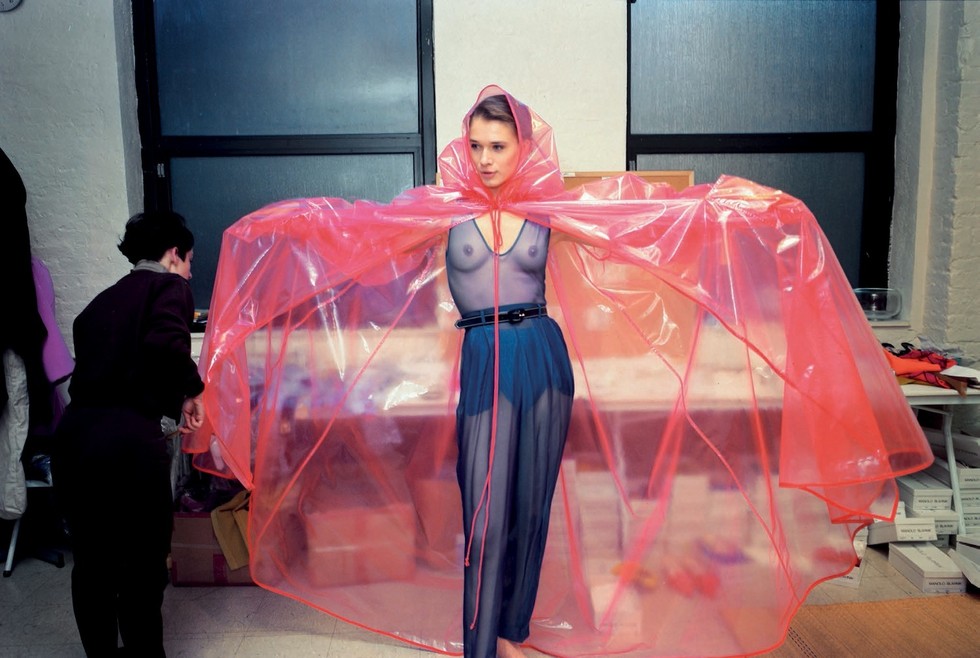 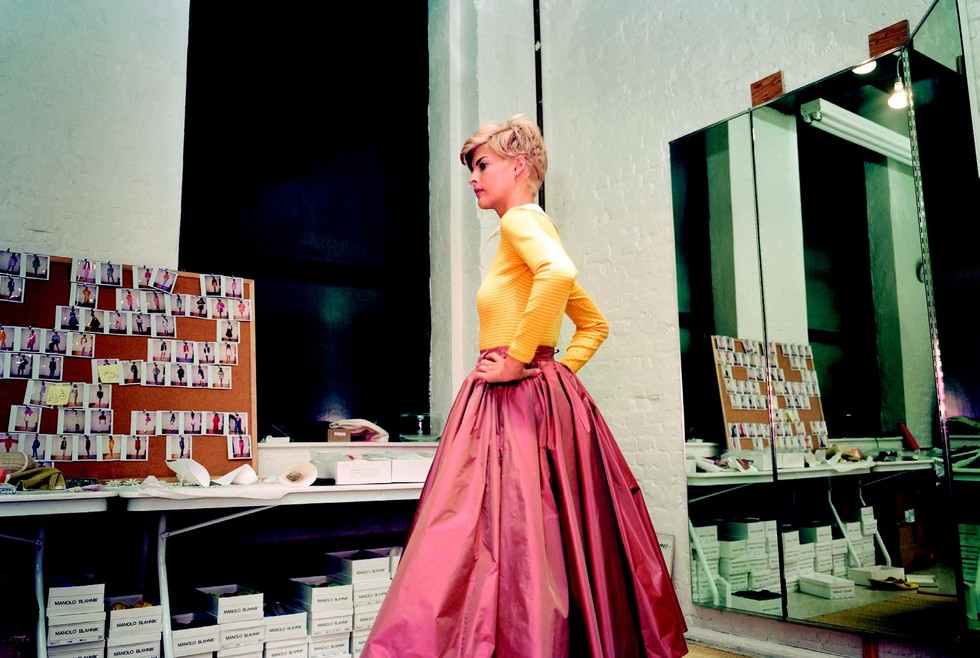 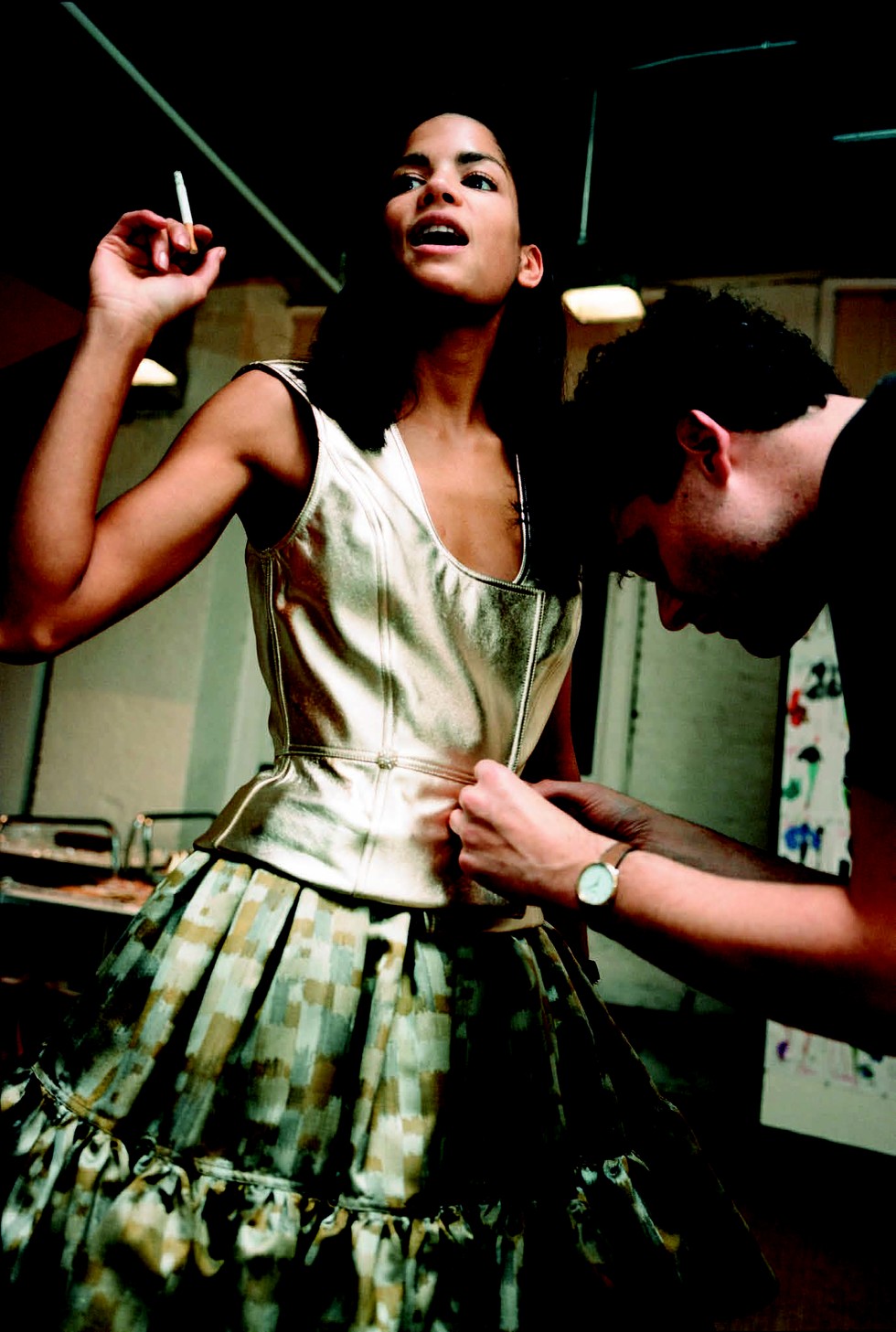 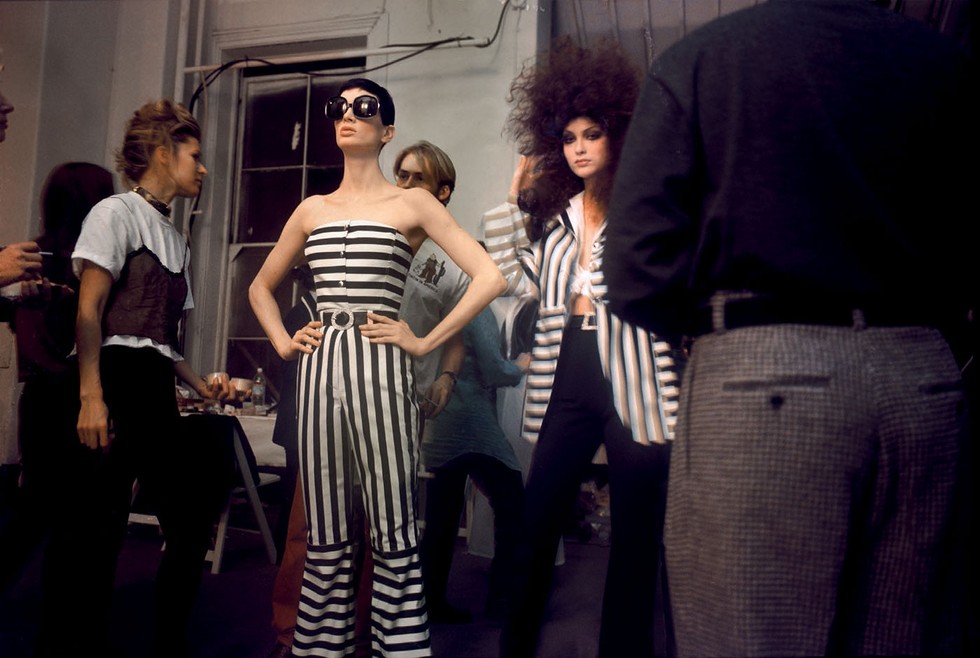 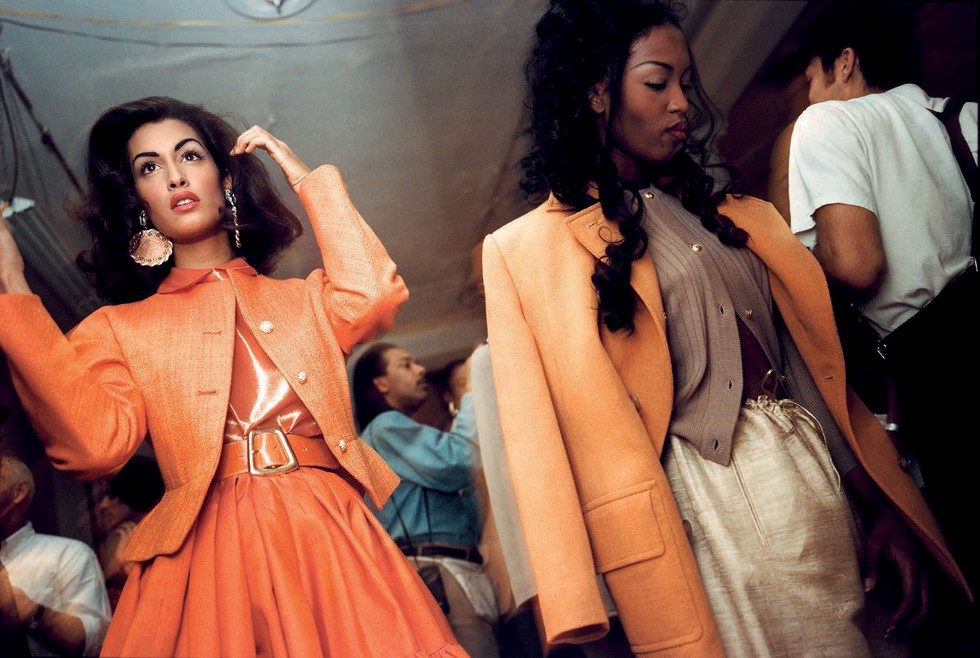 In 1989 Isaac Mizrahi asked Ricahrd Avedon to shoot his first major campaign. The answer was a polite, if full-stop, no. "You can't afford me," Mizrahi remembers him saying. Hardly a cold call, Isaac and he were well acquainted after the designer would make clothes and work on shoots at the photographer's 75th St. studio, Avedon then suggested a young British photographer named Nick Waplington as an interesting, more economical, alternative. Mizrahi and legendary art director Tibor Kalman met with Waplington and were blown away. His vérité style was an antidote to the blown-out earnestness of 80'sfashion imagery and the perfect eye to capture the joyful swirl of Mizrahi's studio.What transpired was not a few sittings to use for the campaign (Spring 1991) but rather several years of Waplington spending days and nights snapping Isaac at work while at the same time capturing the city at play, usually evenings at dance clubs like Save the Robots or Sound Factory. These two New York stories, the ebullient designer in full bloom draping, fretting and laughing along with the sweaty debauched club scene of the moment, come together uncannily in The Isaac Mizrahi Pictures, New York City 1989-93 (Damiani, 2016). In one regard it is a prologue to the canonical fashion documentary Unzipped and in another it is a kind of fugue-style reportage with two distinct melodies playing around one another. Whereas most designer monographs are prone to elision and calculation Pictures, highlights from which are included in the gallery above, is as offhand as it is precise. Yes there is Christy, Linda, and Naomi arranged effortlessly during a fitting or backstage but on the next page club kids and drag queens grind and jeer. The effect is shocking fun, very much like a view of the designers current survey running now at the Jewish Museum (Isaac Mizrahi: An Unruly History). And all the more compelling given that Mizrahi had nothing to do with the book's editing andproduction, save being the subject. We spoke with Mizrahi in advance of his conversation this evening at Rizzoli Bookstore with Nick Waplington, moderated by Paper's own Mickey Boardman, on working with Waplington, his nights in New York then and now, and looking at pictures of yourself from 25 years ago:

Can you talk about how Avedon brought you and Nick Waplington together?

I was making special clothes for fittingsand I was there a lot in that studio, just styling and working for him. Then like three years later when I kind of arrived so to speak, I was thinking about advertising and I approached him and I said, "Dick what about taking some pictures?"and he said, "You can't afford me," ha. The shade, right? And yet there it was, and he's Richard Avedon. But he very smartly suggested Isee this fellow Nick Waplington's book. He doesn't' really shoot fashion but he's kind of a great photographer and I think you guys would get along was Dick's thought. So I looked at Nick's book and I went mad. And I showed it to Tibor Kalman who I had already hired to work with me on these ads, and he went ape shit. So he got Nick over to the states and we all met andthat was that.

Why do you think it worked out the way it did with Nick?

I really loved Nick. He's a doll. I loved having him around. He was the best documentarian, he was like a ghost, you never saw the guy. He came up with all of this unbelievable stuff. He just melted into the background and that's a big part of the craft. Other than the composition, the color, the irony he's really just so good at melting so he can get this beautiful work. Nick is nothing if not prolific. We acknowledged the thing we were kind of sick of was fashion photography. I thought I'm so sick of it that I'mgoing to go to Richard Avedon to get him to do like Dovima with Elephants for me. It [fashion photography] had become this completely saturated, promiscuous thing. So either you're going to take it back to something studied and magnificent that only Avedon could create at the end of his career or do something that like exploded it, that went the other way and looked almost journalistic. Those were the poles that Iwas playing with. And we went with this other pole which was Nick.

What did you think of when you saw the two stories together? Your story and the nightlife story?

I knew he was out every night taking those pictures because I was out too. I know he's such a kind oflustfulguy. I knew he was making these beautiful pictures. He has such an appetite for making these pictures He was always out there working. People were getting fucked up or having sex on the speakers and he was there taking the pictures.

As different as maybe the two narratives are one thing that is so strikingly the same is the colors that come through in both. It's uncanny how alike they are.

There are some artists that I work with that have an unerring sense of color, he's one of them. I never have to worry or think about the color, or how the thing is going to be laid out. He did that book for McQueen which was a huge seller and I saw him like 2 years ago and he said I think we should do a book, and I said, "Of course, I'm always available." Cut to literally three months ago he said, "you know that books coming out in April," and I said oh thats nice. And I didn't care because I knew it would be flawless. Like the layout, the printing, it would be flawless. I just showed up basically, my name is on the cover. But it was a surprise to say the least.

Can you talk about working with Tibor Kalman?

He was God to me. And father. And friend. Everything. He told me everything and I told him everything. He had some crazy ideas about advertising that I didn't agree with, but would collaborate beautifully. He had this laser focus. I've collaborated with some assholes let me tell you, ego maniacs that don't hear, that don't say anything interesting. Tibor wasn't one of them, he was like this family member. But without being a loaded relationship. It was completely casual and wonderful.

Since the book was more or less a surprise what was your reaction when you saw it for the first time?

I had looked at them closely when I was 28, and I looked at them differently then. It was like "oh this would be a really hilarious ad" or "here's a funny one." But now I'm looking at them as kind of a document of the pastand it makes me at once very thrilled but also terribly sad. That so much time has passed. That a) we're looking at it as a kind of relic and b) that I'm looking at something where I'm thinner, cuter, and everything about me was better at the time. Which is both depressing and delightful. I'm looking at it with this laser focus. I barely had an apartment in those days. I didn't have a dog, no relationship, I didn't have anything like that. I called my mother every two or three days but thats it. The rest of that time I was making clothes and dressing those girls. I did love the singularity of it. But I would have killed myself if It was still doing that in the way I was, working like that. And I really mean that. Depressing and delightful. A delight-mare as I like to call it.

Do you have the same feeling about the exhibition at the Jewish Museum?

Weirdly no, because at the museum it's inanimate objects so not really. That little suite in the hallway with the pictures is the only time it's about me in the process. And the video at the end is quite emotional and evocative. But for the most part, I'm very removed from it. It's because it's been curated to death, I being the chief curator, ha. With Chee Pearlman, Claudia Gould, and Kelly Taxter and it all came through me because I'm the one who understood the archive and body of work. I was really telling a new story with old things. Whereas Nick just put this book together and it was a surprise to me and it really did affect me emotionally. Also the book in and of itself is very editorial. Even in its ghostly way of showing whats going on.

I adored my nightlife in the day. What I see now in those pictures is that I used to really go out. And I enjoyed immensely. And I don't do that anymore, you know thats a young person's game.When I was 14 in high school going to Studio 54, I would see older people out and it was all about the mix. But I wouldn't even know what the clubs were now. And even if there were a Studio 54 I wouldn't got to it. Also with social media by the time you get there you're already sick of the place. So when I look at that I think of how different a time it was. And I don't know if it's just me being old or if it is actually really a different time.

One thing I do know. And there are so many things about youth and younger generations that I just don't know. But there are millions of things that I love that I don't understand and are so amusing. That's why makes the world great. That young people bring all of this freshness, not to say that I don't because I do!

Were your nights like Nick's pictures in the book?

Oh sure I was out at those clubs, because those were the clubs. I was at Save the Robots I was at Sound Factory. I was also at the time out at gay bars which Nick wouldn't have gone to because he was not gay, he was a completely womanizer at least then and that was a big part of why I think he took pictures too. It was like just after Boy Bar and just before Splash. For me going out then was about observing the way people looked and the way people liked to look and what it meant to be shocking and we were always giving it new meaning. That's what is so good about young fashion designers because they are so fearless about giving a new meaning to the way people dress in a shocking way. But to me I always like to be quite elegant too. So that becomes the shock.

And your nights now?

I watch a lot of Real Housewives! But I don't really go out. I go to the same dumb restaurants again and again. I go to a lot of ballet, opera, and plays. I loved Something Rotten! It had me screaming. I'm going to the Henriad at BAM. I'm going to Elektra at the MET. I'm also doing a night on April 15th at Wesley Stace's Cabinet of Wonders. So I'm out but in a different way, not so much a club moment!