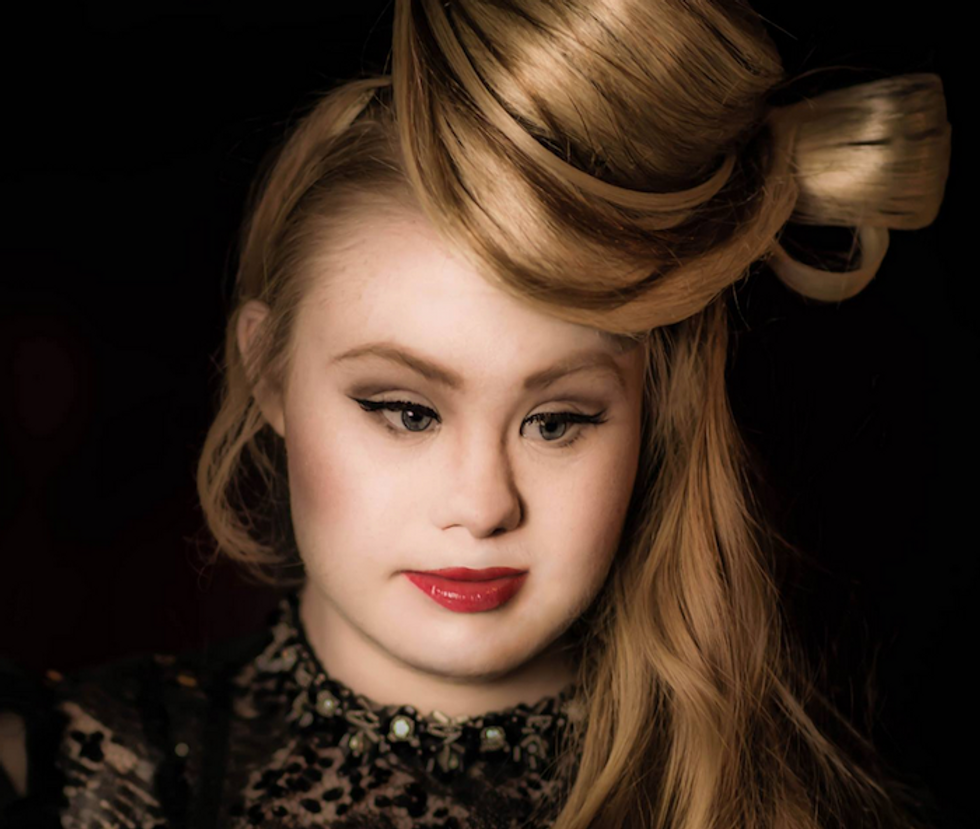 By Sandra Song
PAPERMAG
photo by Erica A. Nichols / Facebook
This year, NYFW has been making huge strides, inviting a whole host of models defying conventional beauty standards to make their debuts at what is arguably the most important industry event of the year -- and one of the break-out faces of this new crop is Madeline Stuart, an 18-year-old Australian model with Down's Syndrome.
Already experiencing immense success, Madeline along with the other models walking in the Christopher & Dana Reeve Foundation-sponsored show for FTL Moda have been creating quite the stir. So ahead of her Sunday runway debut we spoke with her momager, Roseanne, about her daughter's journey to her first fashion week -- not to mention how she kills the trolls with kindness.
How did Madeline get started with modeling? Why did she want to model?
We went to a fashion show last year, and she just decided she loved it, and wanted to get up on the stage and catwalk and start modeling then and there...She was already on a fitness kick before she decided to become a model, so it was only through the fitness kick that she actually decided to be a mode. I put a public profile up on Facebook for her and it just went viral.
So how did walking in NYFW come about?
When the Facebook page went viral the went from having like 20,000 followers to 250,000 followers in a week. And then people started ringing up and saying, "do you want to model for our company?". And we were going to have a look at them and seeing what their values were, because this is not about money to us, which is a good thing. It's not even really about modeling, it's about Madeline having a platform so we can spread the word on inclusion and we can stop discrimination. So we can explain to the universe that even if you have a disability, you're still capable of doing things and you're worthy and come up and say "hi" to me. You know what I mean?...This is her first professional catwalk, [but she's done] two others for charity...to try to raise awareness.
As you said before there's been a big push in fashion to be more inclusive as of late, how do you think that makes Madeline feel? And where do you think this interest comes from?
Madeline doesn't see discrimination...you know to her it's not about how you look, it's about your personality...As far as I'm concerned with the changes of society's view on models, I think it comes down a lot to social media. I mean we have social media now, and everyone's face is out there, and it's now the masses making the decisions, and the masses are made up of mainly the average person. I mean if [there was] no social media...[the big agencies would] say no. But it's not up to them, it's up to the general public, they're the ones that are liking her posts, so the big companies then have to listen because they can see there's an interest. She already has such a following, and Madeline has supporters -- what we call her Facebook family.
When she first started to model, were there discouraging things you experienced?
The only issues I've had is there being some hurtful things said on the internet, by people they call trolls and that. In the beginning, I didn't even know what a troll was you know, people were talking about trolls and I didn't understand it. But I don't look at it like they're being horrible, I choose to look at it as, they've had a really hard life and it's sad and they want some attention. So if anything I try of reach out to them and try to tell them that they're great people...[like there was a girl who said] nasty things about Madeline, and Madeline and I just wrote a message to her that said, "We think you're really beautiful...this particular photo of you with your purple make-up on is gorgeous," and she said, "I'm so sorry, I feel so terrible now for what I've said. And thank you so much for your kind words." And now she's one of Madeline's biggest followers. That's what we believe in, you know. I have a daughter with Down's Syndrome and she taught me how to love and that's what's important in the world you know?
That's real. So what's next for her?
Any day someone else contacts us and says "Can you fit this in? Or can you fit that in?" and we try to fit all the charity events in because, as I said, it's very important to us. So that's just now, and though she hasn't even done [her first] New York Fashion week walk, they're already talking about getting her to visit do Fashion Week in February and also Paris and Milan...I wouldn't be surprised by what could happen. In fact, I wouldn't be surprised if they put her in a spaceship and sent her to Mars. [laughs] There are just so many things happening, and so many opportunities, and it's just such a beautiful thing. It really is.
You May Also Like
Fashion