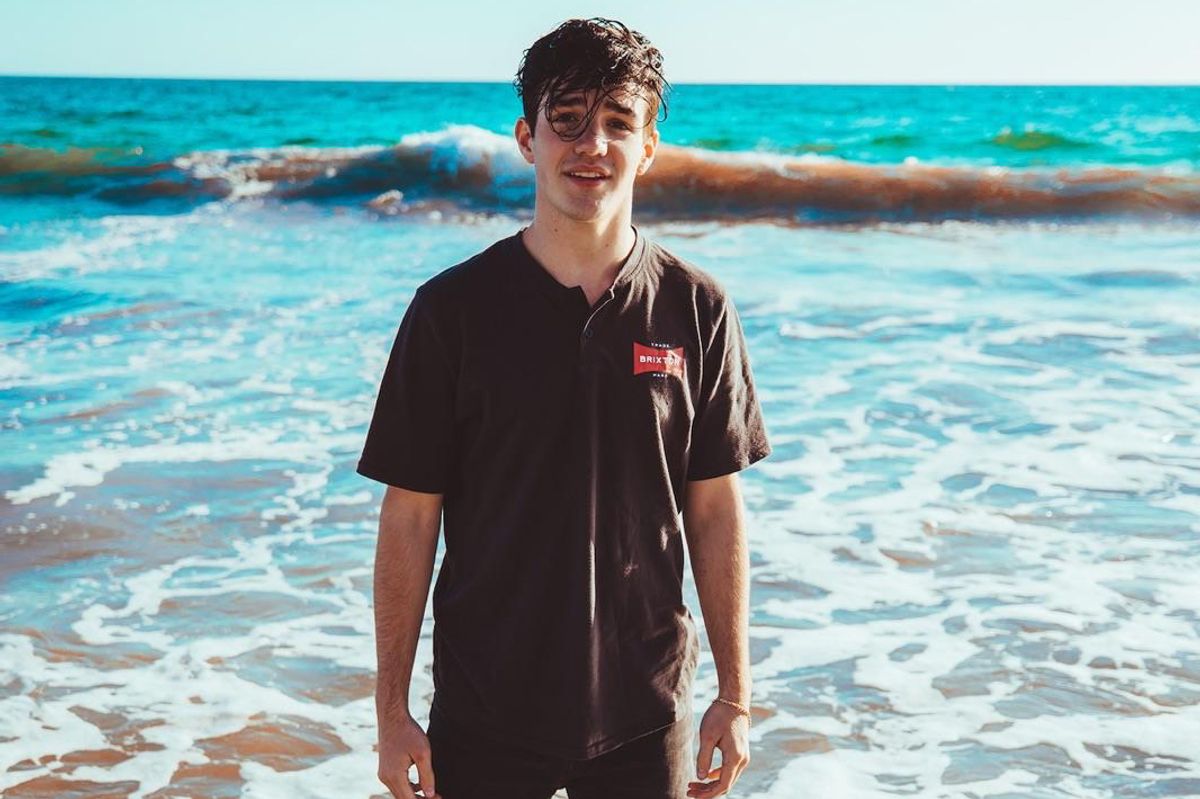 To even the casual eye, Aaron Carpenter is the exemplar of a new generation of famous teenagers who've come to their success through social media. He's a fresh 18-year-old, an attractive, well-spoken, curious internet superstar who, while very well-versed in the world he operates in, still seems bewildered and totally grateful for his following and accomplishments. Beyond that he sees his career as just beginning—and he's right in doing so.

From nearly 2 million followers on the now defunct Vine to almost 3 mill on Twitter and a whopping 4.3 million on Instagram, Carpenter and his MagCon boys, a group of extremely popular, good-looking young men who've found fame in simply being themselves and documenting the process, are entering their next stage. For his friend Cameron Dallas, it's a docu-series on Netflix. For Carpenter, it's a future in music. PAPER called Aaron to learn more about his journey, and where he hopes it'll take him.

How'd you get started with social media?

I've always been into technology and I wanted an iPod really badly. I got one for Christmas [in 2011]. I was talking to my sister, asking her what apps to download and she said, "Oh, you should get Instagram." She was on it, all of her friends were on it. I didn't have any friends on it. I downloaded it, hated it and got off it for a few months. Then my friends starting getting on it like, "There are no parents on here!" I ended up downloading it again because my siblings had it and my friends from school. Then, being a bored teenager, well, I don't even think I was a teenager at the time but I started using it, just messing around.

I liked that anybody in the world could see my photo if they wanted to. I liked seeing the notification that all my friends saw the photo. I liked waking up with a bunch of notifications. It turned into a competition for me. It became "who could get the most followers or the most likes." I started competing with my friends, I guess you could say.

Did you immediately consider it a career tool? Your good friend Cameron Dallas has said that he initially used it for modeling before finding sustainable fame on Instagram.

For me, it was fun at first and then early, early on I realized I could turn it into something bigger. I started transitioning into strategic posting—when to post, what to post at what time, all that stuff. Not in the same model aspect as Cameron because I was like 13 when I was doing it. I didn't look like a model boy at all--that came later on. Strategic posting is kind of the same thing.

#ChasingCameron just dropped on Netflix ! Crazy how fast this all happened. Proud of you brother ! @camerondallas
A post shared by Aaron Carpenter (@aaroncarpenter) on Dec 27, 2016 at 8:56am PST

When does Vine enter the equation?

Vine came into my life after the first MagCon [Meet & Greet Convention] we ever did in Houston, 2013. I didn't download Twitter or Vine until that MagCon show—well, Twitter came a few weeks before. That show was when I started posting and collaborating with everyone else. That's how I got the following.

When did you realize people were really into what you were posting online?

It's a snowball effect. It wasn't an overnight thing like is the case for some others. It started on Instagram and grew bigger and bigger as time went on.

Now you're using your platform to pursue music. When did that interest start?

My entire family is super into music. I grew up around it. I didn't take it seriously until I was about 15, 16. I love entertaining people in any way possible, and I have an insane passion with music. I didn't know how to go about doing it—I could play instruments and I could sing, but I didn't know how to go about it. My platform came along and it's like, "Oh, might as well start doing what I like instead of just posting photos of myself online." It's a blessing.

Last year you dropped your first original track "She Know What She Doin'." How did that come to be?

I was messing around with some friends from back home and decided I wanted to make a song—it was only my second time in a studio when I recorded it. I was just super excited about it so I put it out immediately, but it's not really the musical direction I want to take. You don't look at me and think, "This dude has a hip-hop song." It's just not me. It was a fun project and I still like it.

tryna get better at playing guitar and singing at the same time buuuuut besides that... MERRY CHRISTMAS!!! Hope you all enjoy the day with your families and friends :) love you all❤️..... But that concentrated face at then end tho👀😂

Do you want to release an album eventually?

Yes! I'm actually going in the studio today to start making some stuff and figure out my sound.

When a fan asks you how they can do what you do, what do you tell them?

What I tell everyone, and I do get that question a lot, is don't try too hard to be someone else because people will like you for who you are, instead of liking you for trying to be someone else…because then you're playing off someone else's image. It may work that way, but not as well as being your absolute self. Be 100% genuine. It sounds cliché, but that's the best advice.

What's the most challenging part of being Aaron Carpenter?

I sacrificed my high school experience. I left high school halfway through my freshman year. I went to online school. I've only been to one school dance--homecoming freshman year. I missed out on prom. I'm a senior in high school right now. I'm getting my diploma, but I'm not going to get to walk with all my friends. I don't have a senior ring. All that fun, sentimental high school stuff. People always ask me if I miss it, but I don't really know the high school experience so I don't really know what I'm missing. I've had an amazing opportunity to travel the world at such a young age and see so much and experience so much. I'm really grateful for the cards I've been dealt.

You're a busy guy but what do you like to do when you have some downtime?

I live in the heart of Hollywood and I have a lot of friends around me so I'll hang out with them. We'll do adventurous stuff like go to the beach, ride bikes around Venice or whatever. We play video games. Right now we just spontaneously decided to do a health cleanse: work out everyday, eat healthy, just see who can make the most progress. We play video games.

Are there any movies or TV shows you've been into recently? What have you been listening to?

I'm usually not a big movie guy but I went to see Split and it was super crazy good. I've been trying to listen to a lot of stuff that isn't hip-hop because it seems like the only popular music these days is hip-hop. If you look at the top charts, 85% of it is hip-hop. Ed Sheeran just dropped some new music. I'm constantly trying to find new music to listen to.