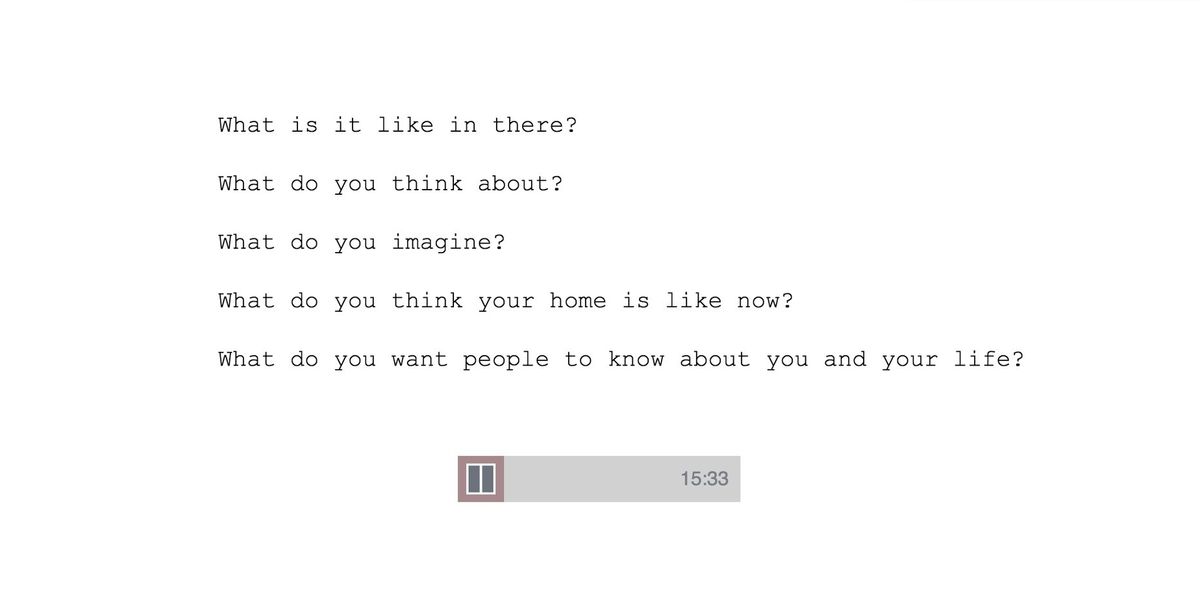 Our friends at NewHive are currently in the midst of a two-week-long series of commissioned artworks exploring privacy, surveillance and prison reform, and in conjunction, we'll be running a series of accompanying interviews, features and essays by the featured artists. The seventh installment of this series comes in the form of an artist statement and interview with artist Jessica Feldman about her project made in collaboration with Jamel Bellamy and Nikki Zeichner called Inside Voices.


Inside Voices, by Jamel Bellamy, Jessica Feldman, and Nikki Zeichner, holds the voice of Jamel Bellamy. Jamel is originally from Corona, Queens, and has been incarcerated in New York State since 1985. Here, he shares stories about his experience of prison, of solitary confinement, and of his personal trajectory and inner thoughts during the past 31 years. Jamel is a father, writer, criminal justice reform advocate, and teaches basic reading and creative writing at the facility where he lives.

Says Jessica Feldman, "The voice you just heard is Jamel's. Jamel is a writer, a teacher, and a father, and is currently serving the 31st year of a 62-year-long prison sentence. This sixteen minute long recording was edited down from two longer conversations between Jamel and Nikki Zeichner, during which she asked him questions on my behalf for this project. Nikki is a friend and collaborator of mine, and a former criminal defense attorney who now makes artwork with incarcerated people, including Jamel.

It took over a month to have these two conversations.

The "work" of this artwork was more bureaucratic than creative: most of the time spent on this piece was spent trying to get to Jamel's voice. A combination of designed inaccessibility and simple dysfunction makes it very difficult to navigate through the systems that mediate communication with incarcerated people.

The process of hearing Jamel began with a conversation with Nikki about how to call someone in prison. She informed me that is not possible to cold-call someone in prison. In fact, you can't call at all — they call you. To call you they have to know you, add you to their "call list," get approval to call you, and decide to spend their limited calling time calling you.

On top of that, you have to set up an account and add money to it to pay for the calls. Setting up these accounts is difficult because the website that accepts payments is broken in many places, so you cannot select a person for whom to designate funds, nor do you receive confirmation that is account is successful. You enter your credit card and hope he calls.

That week, no call was received. Some days later, we learned that Nikki's account has run out of funds, and she had never received the automated notification to add more. Once she added funds, he was able to call her. He called again a second time. Each call could only last 30 minutes and then was automatically terminated.

There was much more I wanted to ask Jamel based on the stories he shared. He spoke about a short story that he wrote, which was published. I looked for it later, but couldn't find it, although I did find another one about going up for parole and being denied. He spoke about his time in solitary confinement, and his time in Attica. He mentioned, but did not elaborate on, the uprisings in 1971. I wanted to ask if he knew about the current prison strike, and what he thought of it, but I knew the call was monitored and decided against it.

In my effort to ask about Jamel's worlds, I began to wonder about the ways in which self-censorship was affecting the development of both of our creative and political imaginations. What ideas or ways of thinking atrophy when they are not expressed? What feelings are left simmering on the inside?"

We asked Jessica some further questions about the project:

Did you have any doubts about this project in light of the discrepancy between your privilege and Jamel's current reality?

This is something I really struggled with, and have struggled with in the past when I have worked with people in prison or other institutions. There is always a period of reckoning with the problem of some else's difficulties or suffering becoming my material, and contributing to my career. That is something to look at carefully, especially if money or prestige get involved. One thing to think about is, how are you mobilizing your privilege? I wouldn't say that I think this difference between our circumstances is a reason not to make work addressing that difference. Quite the contrary -- art can speak to this in an intimate and humanizing way, if you get it right. (I try ... ) The way I've been phrasing this question to myself over the past few days is: who and what is being recognized in the work?

How did you navigate this difference in privilege?

As I'm answering this, I'm thinking, what would Jamel think of what I'm saying here?! How does he see himself in this dynamic? He's surely aware of the difference in our situations, and that we were born into very different worlds. But I think he shares with me a sincere belief that people need to and want to know about his world and about life in prison. We could work from that common place. I think this work will improve as we get to know each other better. I don't say that to sidestep the question. There is no way to get rid of inequality except to get rid of inequality. But people can work across difference if you recognize that you each come with very different wisdoms, and the struggle to understand each other is a valuable one. Putting his story at the center of the piece seemed to be really important.

How did Jamel respond to your initial query?

He called Nikki and they discussed my questions -- he had a lot to say. I believe he already knew who I was because of an earlier piece I made about incarceration.

Why did you find it important that Jamel's voice be heard?

I became acquainted with Jamel and his story through Nikki Zeichner and her long-standing collaboration with him. (They have a project opening this weekend, in fact.) Her artwork draws on years of friendship with Jamel and crafts an in depth picture of his life. Talking with her about his story was a major inspiration.

More broadly, it is important that people on the "outside" get some sense of what life is like on the "inside." There is a lot of speculation, there are a lot of statistics, but there is not a lot of listening to the individual, personal experience of incarceration. I think we understand better what is at stake when we can connect to the specificity of the system's effects. And to really sit and listen for some time requires a kind of engagement with the material that is important. Taking 15-20 minutes to listen to someone is not normal online behavior, but these are not superficial subjects. On a more personal level, Jamel is cool. He's a writer, he has a lot of thoughts to share, and a really complex story of change and self-awareness. It is important to him that people know his story.

Will Jamel receive a portion of the commission from this project?

What other works have you created around the topics of prison and prison reform, and how did you come to be interested in this topic?

I don't remember how I first got interested in this topic. I remember working on a piece in art school in 2007 called "Final Statement" that made use of the recordings of the last words of people on death row. (Georgia State Prison keeps recordings in its records.) At that time I was really obsessed with the idea that the last thing these people did was speak, and wondered what that said about our culture...that right before we systemically destroy someone we need to let them talk. That led into a deeper engagement with the practice of imprisonment and isolation in general, which is a more political engagement with the ways in which a society sustains itself, both economically and sociologically, by keeping a population separated, disciplined, and laboring. I wanted to understand better what these lives were like, even while I realized that I could empathize but never really sympathize. One piece that deals with this is The Glass Sea, a public installation in the form of a warped prison cell. For the piece, I interviewed incarcerated people about their schedules and tried to "perform" their days, while shooting a video from my perspective, which was projected onto the back of the installation. It was an attempt at raising awareness, and also an attempt, however paltry, to imagine their worlds.

I want to say, "yes!!" But actually I think it's more complicated than that. For one thing, it depends on the context in which the work is shown -- I tend to think that a piece in a commercial gallery in Chelsea, or in a private collection, well, it speaks to a more rarefied audience. So there is a question of who you are trying to activate. At the same time, art can be more than activism because, at its best, it connects us to the ambiguous, confused, unresolved parts of us, and allows us a moment to imagine other perspectives. I think this can have huge political consequences. Maybe art can motivate people to become activists.

What are you working on next?

Actually, I am working on a tech project! This is much more in the realm of activism: it is called amidst, and it is a secure mesh network for mobile phones, designed for democratic activist movements. I'm collaborating with a few really clever computer scientists on this. It's sort of an art project in that it is an experiment in making something based on people's dreams about how they could communicate in a truly horizontal democracy. We thought we'd make it and ... see what happens...

Stanley Jamel Bellamy (Jamel), originally from Corona, Queens, has been incarcerated in New York State since 1985. He is a father, writer, criminal justice reform advocate, and teaches basic reading and creative writing among, other things, at the facility where he currently lives. His stories have been published by Bleak House and have been presented in spaces in New York City and St. Louis, Missouri.

Bellamy will be up for clemency this year after having served half of his 62 and a half year sentence. In 2014, 9 clemencies were granted out of 6,561 federal clemency petitions.

Jessica Feldman is a new media artist with a background in sound, sculpture, and installation. She moves among the worlds of media art, electronic music, academia, and activism. Many of her works are site-specific, public, participatory, and/or interactive, and deal with the relationships among the body, technology, (the) media, and intimate psychological and communal social dynamics revealed by contemporary systems of control. She received an MFA in Intermedia Art from Bard (2007) and currently is completing a PhD in the Department of Media, Culture, and Communication at NYU.

Nikki Zeichner began collaborating on multimedia projects with incarcerated individuals in 2013, while she was working as a criminal defense attorney in New York City. She currently works on technology and innovation projects within the federal government and splits her time between San Francisco, California and Brooklyn, New York.