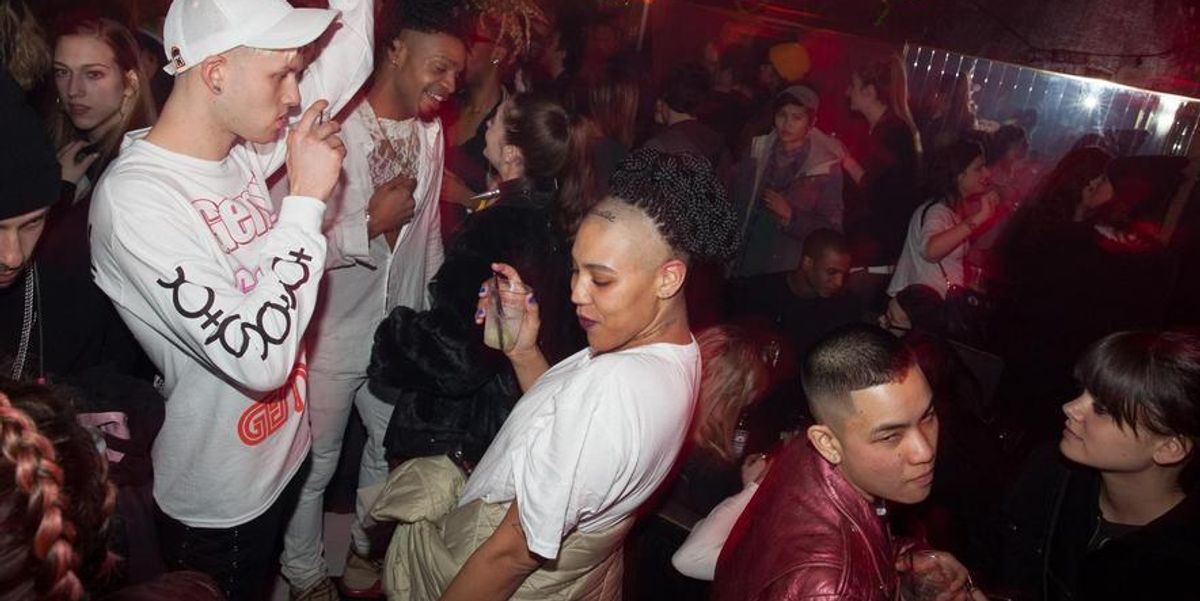 Why a party's hosts are as important as its DJ.

At every "cool" party, they're hard to miss: A group of glamorous kids wearing something out of a science fiction movie, a couture fashion collection, or your worst nightmare. They smoke cigarettes where they aren't supposed to, take endless selfies, dance on top of the furniture and make out until their makeup smears beyond recognition. They're the party's hosts, meaning they're having the most fun you can have at a party -- and they're being paid to do it.

Casual partygoers rarely see the huge amount of work that goes into making a party successful. Someone glancing at a flyer or popping into a club for a few hours might not pay attention to anything beyond who is supplying the music or who they're trying to go home with. But hosts are an unexpectedly integral element of the party scene backbone, providing much more than just the appearance of non-stop fun.

This is not Kim Kardashian at Tao, or Paris Hilton at Lavo, superfamous celebrities who receive eye-popping fees to drop into an event for a few photos, lounge in a heavily guarded VIP section, and then head off to the party they actually want to attend. For the underground parties, the alternative events that pop up throughout the city, the hosts play a part almost as important as the DJs and promoters. In gay nightlife, where cisgender white gay men make up a large percentage of the people producing and promoting events, the host list is often the most diverse aspect of a party's lineup and a signal to possible guests of that party's inclusiveness. Hosts also fulfill a more mundane (though hugely important) practical purpose: Promoting the party in every outlet available.

Good hosts help "spread the word of the party gospel," as party creator Frankie Sharp puts it. Sharp's a nightlife staple who's been hosting and producing events in New York City since 2009, including launching the now-defunct WestGay, and currently throws a weekly shindig at the Jane Hotel. "It's not as easy as it sounds -- convincing someone three times a week that, if you miss tonight, your life is gonna suck is a tough sell," Sharp says. "So I need savvy, sexy, smart, party pros."

Photo from one of Ladyfag and Seva Granik's SHADE parties; image by Rebecca Smeyne

Even if a promoter has a wide social network, substantial email list, and thousands of Instagram followers, working with good hosts is crucial to getting the event out to a wider audience. Facebook has been cracking down for years on how users share their events, tweaking their algorithm to the detriment of zealous promoters. The result: Sometimes high volume users can invite no more than 50 people to their event.

"Promoters hire hosts to bridge gaps of different scenes," explains Richard Kennedy, who produces his own events in addition to hosting at 11:11--when he's not touring with dance music outfit Hercules and Love Affair or starring in videos for Nicopanda. "In the age of Facebook events, hosts are crucial in making sure the algorithms work in favor of the event. To maximize the reach of the promoter and the party, hosts are relied heavily upon to poster all of their social media accounts with the night's best plans."

"Fifty percent of the job is promoting the party so people are there when you arrive," explains drag queen Severely Mame, who hosts Frankie Sharp's weekly party at the Jane Hotel. "To an extent, I feel that hosts should entertain the paying party-goers. If [guests are] nice and paying for entry and drinks, in the long run they're helping you get paid."

Because while it's a fun job, never forget that hosting is a job--and not the easy pay day it may seem. Those aforementioned celebrity hosts rake in big bucks to show up at events. Kim Kardashian can command over $100,000 (per a 2012 breakdown) for appearance, and even less luminous reality stars can net several thousand dollars to show their face at a club. But the financial fall-off from A-List (or even D-List) stars to everyday nightlife hosts is sharp. On average, a New York City host can walk away from a night with around $100. While there are non-monetary perks--comps for entry, free drinks or bottles, and, if a promoter is feeling generous, money for cabs--there are also hidden costs, as hosts are expected to show up looking fabulous.

"I tend to thrift for club looks, that way if it's ruined I spent typically no more than $15," says Kennedy. Between a look and "a dub of Mary Jane" Kennedy estimates he's going to spend at least half of what he makes in a night before he even arrives at the club--and that's not even factoring in transportation. No host wants to ride the train in heels, after all.

"Cumulatively it often takes more money to host than what you're actually getting paid -- if you're getting paid," adds Maya Monès, a trans model who hosts queer parties around Manhattan and Brooklyn, and has walked for Gypsy Sport. While a hundred dollars may be the standard, there are instances where hosts will see even less. Some might host to get their name out and start building up their cultural capital. Some will host as favors for friends, or for trade--working someone's event so that they in turn will work theirs. In the Brooklyn underground rave scene, hosts are usually just people who would already be at the party and receive free entry and drinks in exchange for a little promotional assistance.

But despite the practical use of hosts as another angle of promotion, and the tight economics of the gig, plenty of hosts see their role at an event as more than just a promotional tool.

"I always tell clubs before I start working with them that I'm not a promoter," explains Nicky Ottav, an Instagram wunderkind famous for elaborate makeup creations, who is one of Sharp's "sexy, smart, party pros" for his weekly party at the Jane Hotel, and also runs his own parties every weekend at Flash Factory. "Sometimes 150 people come with me, sometimes five people come with me, but that's not my speciality. I'm an entertainer, I'm atmosphere. I'm the thing that paying guests will remember, that unique thing that they'll tell their friends about and will draw them back for more. I see myself as an important detail that makes the night actually unique."

And in New York's queer party scene, where community is more valuable than the bottom line, hosts help the party feel like a collaborative effort, and take their role making the party fun for everyone seriously.

"It's really about creating a magical environment in a nightclub," says Jarrett Edward, who hosts for Ottav's weekend parties at Flash Factory, the fliers for which regularly boast as many as twenty hosts. "It's not about numbers, or girl to guy ratios, or silly things like that. It's about making people feel welcome and creating a sense of community under a disco ball."

La'fem Ladosha, arguably New York's closest thing to party royalty, boils down the hosting gig to its essential essence: "I find my clique, ki-ki, grab a drink, twirl on these hoes and basically give them what they want. I show up in the look, looking cunt and full of life, and keep it lit."