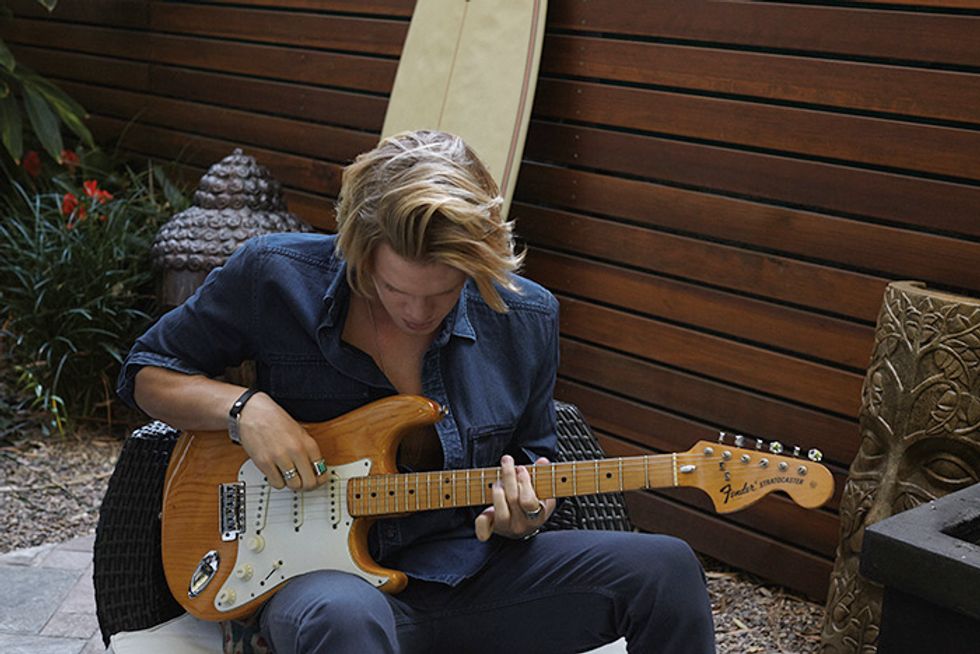 Independent. Single. Eighteen. Cody Simpson is All Grown Up

Even before the cameras come out, Cody Simpson is photo-ready, standing shirtless in his kitchen and strumming his guitar as his then-girlfriend, supermodel Gigi Hadid, watches on. (The two officially split up in early May, a few weeks after the PAPER shoot and interview took place.) He's surrounded in his West Hollywood home by surfboards and framed photos of Bob Dylan, Elvis Presley and Neil Young. While it's all picture-perfect, something much bigger is going on beneath the surface: for once in the 18-year-old Aussie singer's life, he's not living out anyone else's vision. Simpson, who recently broke away from a major label in order to start afresh as an independent artist with his latest album, Free, out July 10, is entering adulthood exactly the way he wants to. A big part of that is giving back: he recently served as spokesman for the United Nations' #HappySoundsLike playlist, and he's a donor to his friend Miley's Happy Hippie Foundation.

Later, lying across his bed, Calvin Klein briefs peeking out of his jeans, Simpson tells me about shedding his squeaky-clean image, using his platform for good and navigating the fresh challenges of adulthood.

Was there a tipping point when you decided to leave the major-label world to release an independent record?

It was an accumulation of different things. I was really young and impressionable and wanted to please adults, and when I got older I was like, Hold on a second; I don't have to do this. A&Rs are not musicians -- they don't write music or play instruments -- but they sit in the studio and tell you how to write a song. A major part of being a label artist is listening to them. So I'd be sitting in the studio writing a song and they'd say, "You can't say that." I was like, "Dude, you don't even make music. You don't know." So there would be a lot of processes you'd have to go through that compromise your artistry. The politics started to get too much -- the old men in suits selling music to 12-year-old girls that wasn't even written by [the artist] originally.

Did Miley help you transition into adulthood?

She has been a really good mate and helped do the cover art for [the single] "Flower." Coincidentally, I wrote a song called "Happy Little Hippie" for her Happy Hippie Foundation -- we're thinking of doing something cool with that and still figuring it out. I really admire the way that she doesn't care what people think. She just does her own thing. Seeing her make a cool transition showed me it could be done.

You recently worked with the United Nations.

Yeah, they had this campaign called #HappySoundsLike that promotes music being a part of people's everyday happiness. For me, if I'm stressed or down, when I pick up a guitar it all goes away. That's my escape, and it's also my job. The UN must have seen some of the stuff I was doing, which was a very fulfilling feeling Â­-- to be acknowledged by the United Nations and play a gig for them.

When you're working with various foundations, do you have to be more considerate of your image? With the picture of weed you posted to Instagram and then took down, you're not doing anything outside of what's normal -- or even legal -- but what does it mean to be experimenting and working out your lifestyle in the public eye?

There's sort of a point where you have to stop caring. There's a balance of being a good example because you're in front of people and also showing people that you're real, which is just as endearing as not doing anything wrong. I don't think marijuana is wrong. I think it should be legal. It does a lot more good than other things that are legal. I understand laws, but I also think it's important to have your own personal laws.

Did you feel prepared for fame when it happened? You were so young.

Not really. From an outside perspective, it can look as though it happened very quickly. But there's been time for gradual adjustment. I wasn't playing big gigs right away. My first shows were like 50 people, then it was 200 and then 1,000. I will never be prepared for fame -- it's something I'm still trying to master. I try my best to find balance and not be in front of cameras too long.

Do you think you've found a good balance between your private and public life?

I'm trying. You can easily lose yourself.

Your new songs much more intimate than any of your other releases. Do you think about the separation between your private life and your public life when you're writing?

With the lyrical content on Free, there's an element about women, there's a portion that's fictional storytelling, and there's songs about the feeling of breaking free. When I started writing the album, I was still going through this transition, so I was writing for girls and then the last four songs were about other random shit. I've learned a lot from the start of the album process to the end. I love track twelve way more than track one, because I was better at the end.

What's your impression of the music industry now that you've seen it from the perspective of an independent artist?

I'm discovering the much more positive side of the industry -- something I never knew existed. Now being more independent, you see what was wrong before. It's a beautiful feeling being able to do it my way. I produced the whole album with Cisco Adler. We wrote it in Malibu and did it all on our own time. Turns out that creative environment allows people to thrive. Now I understand why I love the artists I love so much... the Ben Harpers, Jack Johnsons, and anyone back to Neil Young and Jimi Hendrix, and Miley. Now I get to walk down that road as well.

Have you thought about opening up a label to allow other artists to thrive in that way?

I opened up Coast House recordings to distribute my new album. I haven't done a lot of thinking about signing anyone yet simply because I need establish my own music and following, but it's something that I would love to do. I think that this way of doing things is so much better. And the industry is changing: record labels are becoming way less important in helping an artist's career. As long as you have a management team that shares your vision with you, the only thing record labels are instrumental in is getting your music on radio -- which isn't necessarily my priority. So down the road, I'd love to help people that want to approach music in a similar way.

When you were making the shift to an independent artist, did you have any fear about finding a new audience?

No, because it doesn't happen immediately. I'm still 18 and I know that there's at least three years before I'm really going to be able to tap into it. But at least I can play gigs, keep releasing music and become a better player. There's no rush, really.
You May Also Like
Film/TV

Number One Popstar, Covered in Foam and Beans