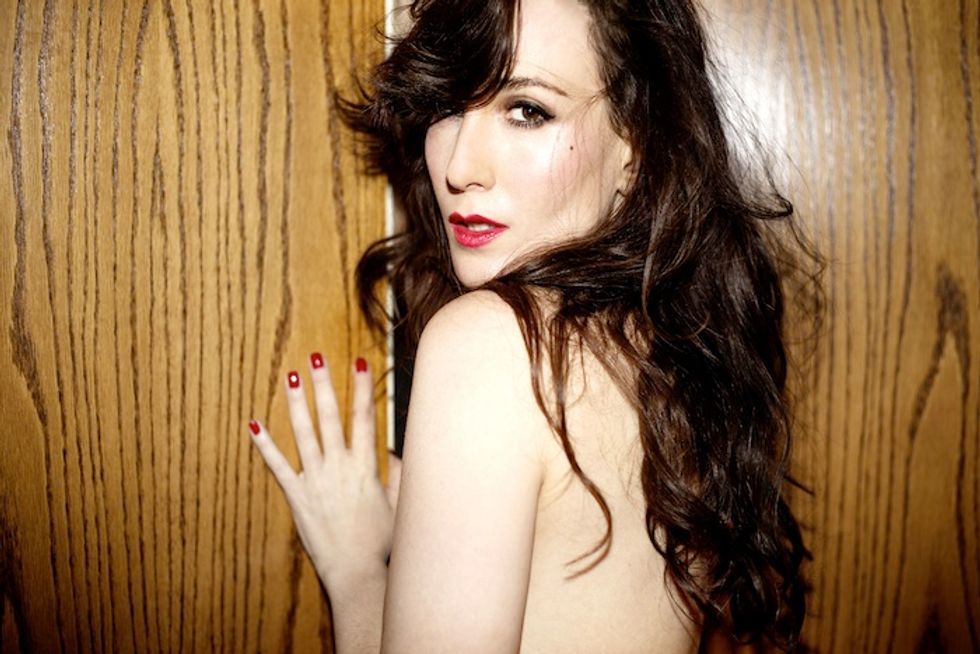 "I'm At Once the Dealer, the Addict and the Substance Itself": A Q&A With Class Actress About Her New EP

by Alex Catarinella
PAPERMAG
(Photo by Eric Johnson)
What would the soundtrack to your life sound like? If you're Elizabeth Harper, it'd sound pretty damn superb, and perfectly fit for a Lynch film. Four years after her debut album, the songstress also known as Class Actress has finally blessed the pop universe with a new EP, Movies. This time around, Harper worked with Casablanca Records labelmate, the legendary producer Giorgio Moroder, and while these days Moroder may be best known for his recent tracks with Daft Punk, his work on movie soundtracks like American Gigolo and Scarface, makes him a particularly appropriate collaborator for the collection of dark, dance-y synth-pop that finds much of its inspiration in the glamorous facades of Hollywood. On the heels of the album's release, we had the chance to speak to Harper to hear her thoughts on everything from working with Moroder to why sometimes it's necessary to start unraveling in the name of art.
Your debut full-length, Rapprocher, was released in 2011. How has Class Actress grown since then?

I think the songs are more accessible on Movies. I took my time writing them and getting things in order. It has its own spell, it's the real me. I was a little in my own way with Rapprocher, caught between still trying to be erudite and wanting to be commercial. I listen to it now though and think it's an incredible record and it's all just me and Mark [Richardson] in my apartment, getting to the root of stuff, laying it down. No one can touch that synth work. But Movies is special. It's an event.

You worked with legendary producer Giorgio Moroder as well as emerging producers like Mess Kid and Neon Indian. How was that?

It was an exciting experience to work with someone like Giorgio, but also up-and-coming producers because we all wanted to do vintage Giorgio. Giorgio wanted to do current dance music, so meeting in the middle was really liberating. There was definitely a little push and pull with me and Giorgio in the beginning, but then he let me do my thing and trusted me so it all turned out how I wanted it.

Are there any Hollywood starlets who have influenced the EP?

Like most sad, suburban girls, when I discovered Marilyn Monroe, I thought I found a friend. I used to watch her movies and practice and imitate all her expressions, her voice, her movements in the mirror. Yet the story behind the smile was so heartbreaking. It has always been something I can deeply relate to. Giving too much to the wrong man. Now I act like an ice queen but underneath it's straight fire.

You say Movies is your soundtrack... Walk us through it.

Movies is the story of addiction told from my shifting perspectives. I'm at once the dealer, the addict, and the substance itself: love. You get to watch me spiral into addiction -- trading in reality for fantasy -- until I transform completely. By the end of the EP, I'm more apparition than flesh, more dream than real life.
Diving into my dark side, I found the seat of creativity from going all the way in. Along the way, so many things happened I could have never imagined but everything that fell apart led to something better. Like Marilyn said, "Sometimes good things fall apart so better things can fall together." I wanted to create a world that when you're in it, everything melts away but freedom and passion.
Art can be the process of unraveling yourself and your perception of the world. The voice that has sympathy but can also be very sarcastic and self-deprecating. It's anger, desire, desperation and love mixed together. There's just the void with a flashy neon store built on top of it... like an ancient Indian burial ground. Like Malibu, I guess. In the end, everything had to happen to tell the story. The six songs on Movies are a modern fairy tale of love, loss and redemption.

While you were working on the EP in Hollywood, you were also visiting your ailing father. Did your father's passing influence your songwriting on the record?

'Movies' was the first song I wrote for the EP because I was definitely feeling real and raw just after my dad died. The vocal performance is one take. It was pure magic... destiny. You never know when all the pain is going to make sense. But one day it just does and that box of darkness becomes a gift. 'Love My Darkness' was similar. I was so numb. I thought why can't darkness be love? Why can't I love my own darkness and isn't real love when someone loves yours? We are so afraid to be vulnerable and show our dark side, but hiding it will only add to your pain. Shine a light there, create a shadow and one day that shadow, the unconscious part of you, who is acting out and making bad choices that hurt you, will show you all the answers.

Can you break down the six tracks for us in a few sentences?

1. "More Than You"
"More Than You" = BÃ©atrice Dalle in Betty Blue. One of the lyrics in "More Than You" is "So whatcha fear? Cause there's a little poison in all of us." It details my helplessness in the face of desire -- an intense, obsessive craving for this guy. He's a drug I can't get off of.

2. "The Limit "
I make a pact with myself: instead of going to him, I'll wait for him to come to me. It's an attempt to get some power back.

3. "High On Love"
We see that my attempt to get power back has failed. I'm in even deeper, and he has all the control.

4. "GFE"
I transform myself into a luxury item, an object, for this guy to enjoy and consume. It's my ode to the escort, to the geisha. I'm not a girlfriend, but a simulated "girlfriend experience" -- now I'm the drug.

5. "Love My Darkness"
It goes even further. I'm not even an object anymore. I'm "darkness." Like the result of a star collapsing into itself after it exhausts its fuel.

6. "Movies"
I admit I created myself from the movies, which are, after all, something projected in the darkness. The EP's arc is revealed. We now see how everything I've done and the addictive love reduces and reduces me until there's only darkness. But there is a purpose: movies, like fantasies, need darkness to exist.