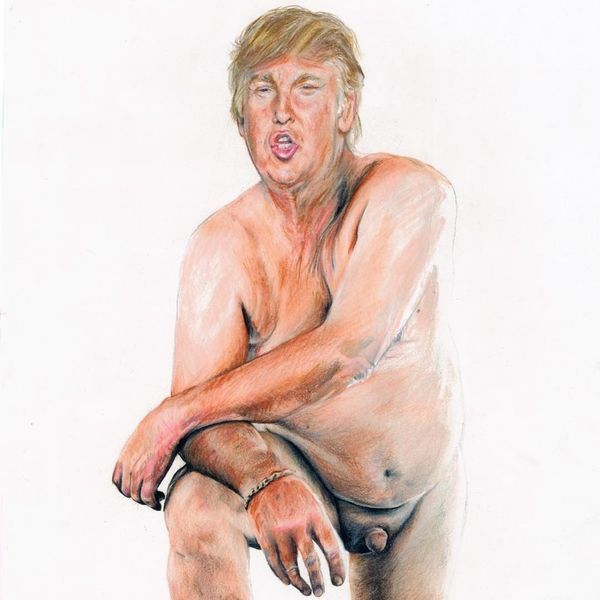 The Artist Who Painted Trump With a Tiny Dick Is Back

Remember the viral artist who painted Trump ball-less with a micro-penis? You might have forgotten about it, given that it graced our feeds about 282,847,923 outrageous headlines and pieces of Trump protest art ago, and debuted in 2016, before he'd even taken office.

Her name is Ilma Gore, and according to Rolling Stone, she's back. Gore has announced a brand new nude series of all the most powerful men in the world, portrayed with tiny junk. She'll unveil a new painting online each day in December, and her muses will include Kanye, Mark Zuckerberg, Harvey Weinstein, Brett Kavanaugh, Richard Spencer, Osama Bin Laden, Darth Vader, Superman, Albert Einstein, Pope Benedict XVI and Jesus Christ.

Gore's depiction of Trump, which has become one of the most expensive nudes in the world, valued at over $1,000,000 when it was shown at the Maddox Gallery in London in 2016, amassed virulent controversy from all sides. She penned an op-ed in The Guardian after the painting went viral, describing how she was perpetually harassed, received death and rape threats, and on one occasion, punched in the face by a Trump supporter.

On the other side, critics that found the painting, which was one of the many pieces that depicted Trump nude around the election, tone-deaf: accusing it of being transphobic (for appearing to mock non-normative genitalia), body-shaming and unproductively concerned with Trumps appearance as opposed to his behavior and policies.

Gore has explained that she hoped to raise questions about how bodies are coded, and probe Trump's toxic masculinity: bait he took, when he defended his penis size at the Republican debate during his campaign.

"I wanted to raise questions about how we think about gender: if I painted Trump with a massive penis, why would we then take it as a signal that he is powerful?" Gore explained in her Guardian op-ed. "Why would a small penis be viewed as effeminate? And what is wrong with effeminacy to begin with?"

With the announcement of her new series this week, Gore shared a letter addressed to Trump, apologizing to him, but defending her project. "To call this body shaming is to ignore the oppression that created it... Artwork is not a guide to human decency and morality. That's what the government is supposed to be."

Gore will be releasing a new painting online for each day of December, which you can view on her website here. The images will be available for free download, and she is encouraging fans to make bootleg and copycat merchandise.