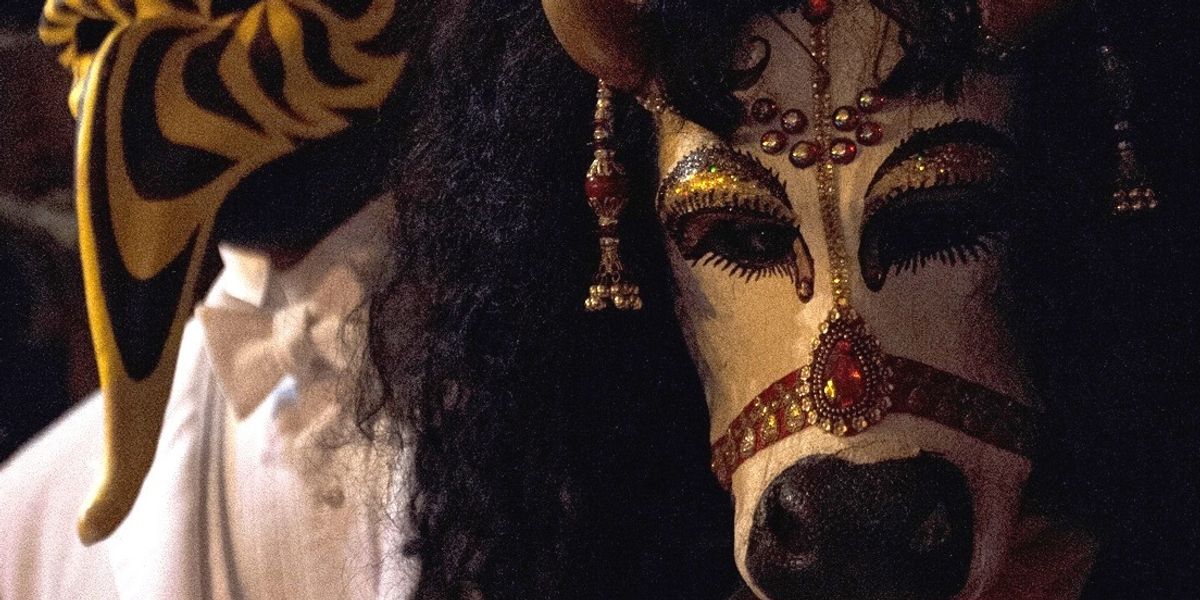 We checked out a masquerade party on a massive, lakefront estate.

Somewhere in Connecticut, about an hour outside of Manhattan, three people perform a ritualistic chant, completely naked aside from animal masks covering their faces. Firedancers perform behind them while 30 guests in formal attire take in the scene that's happening at a quiet, lakeside estate surrounded by trees on either side. They're awaiting the start of the Illuminati Ball, playwright Cynthia von Buhler's latest immersive theatrical experience that promises a night equal parts Eyes Wide Shut and Burning Man that we were on hand to witness for ourselves.

Inspired by leaked photos from Baron de Rothschild's 1972 Surrealist Ball at the Château de Ferrières outside of Paris, von Buhler has crafted an original story to hold together the night, not unlike other participatory shows like Sleep No More and Queen of the Night. "The Baroness de Rothschild wore a stag head with diamond tears," von Buhler tells us of her initial inspiration. "Her mask made me think about the silent sadness and powerlessness of animals. The Illuminati is all about power. I wanted to create a surreal, bourgeois dinner party filled with power struggles and morality tests." She continues, "Our rituals, dances and some dialogue are taken from leaked Illuminati and Masonic videos."

The setting isn't the Rothschild's Château, but von Buhler's elegant, 5,000 square-foot lake house feels plenty lavish, with its large stone fountain, screening room, and a spacious dining room filled with taxidermy, sculptures, and paintings she made herself. The dining room is the main setting of the night, where most of the story unfolds. The main characters (played by actors, most of whom have worked on von Buhler's other shows) each serve as the leaders of the 5 'kinship groups' each guest is assigned to -- Pig, Monkey, Chicken, Cow, and Mouse -- and each leader is responsible for guiding their groups throughout the night. Representing some of the ways we exert power over animals, characters like Vacanti (Mouse) has prosthetic ears covering his back like the famous scientific experiments, and Kamadhenu (Cow) has breast pumps attached all night pumping milk.

Once we are all seated, Vacanti (played by Luka Fric) announces all of our names and occupations. The crowd is diverse, with artists, bankers, lawyers, and two well-known models all in attendance, but we almost exclusively interact with our kinship group at our table. Shortly after these introductions, the first ritual begins as the first course gets served: we're blindfolded and instructed to reach out to our plates to pick up a warm, sticky, wrinkly object. We all eat it, not knowing at all what it would taste like. It's a fitting symbol of the night ahead: we're expected to try new things, engage with the environment, place our trust with the hosts, and indulge completely. 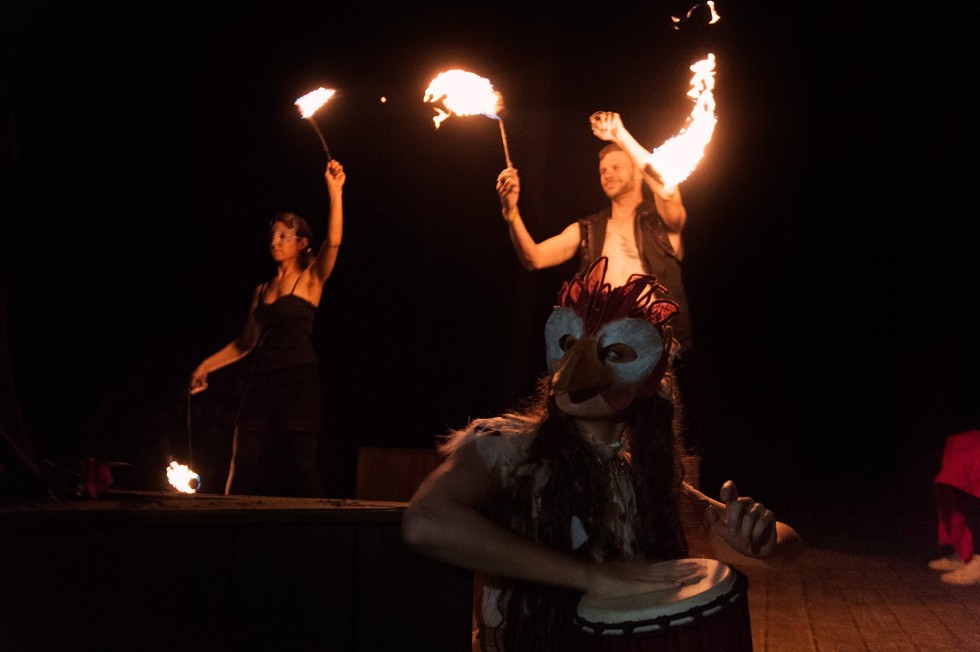 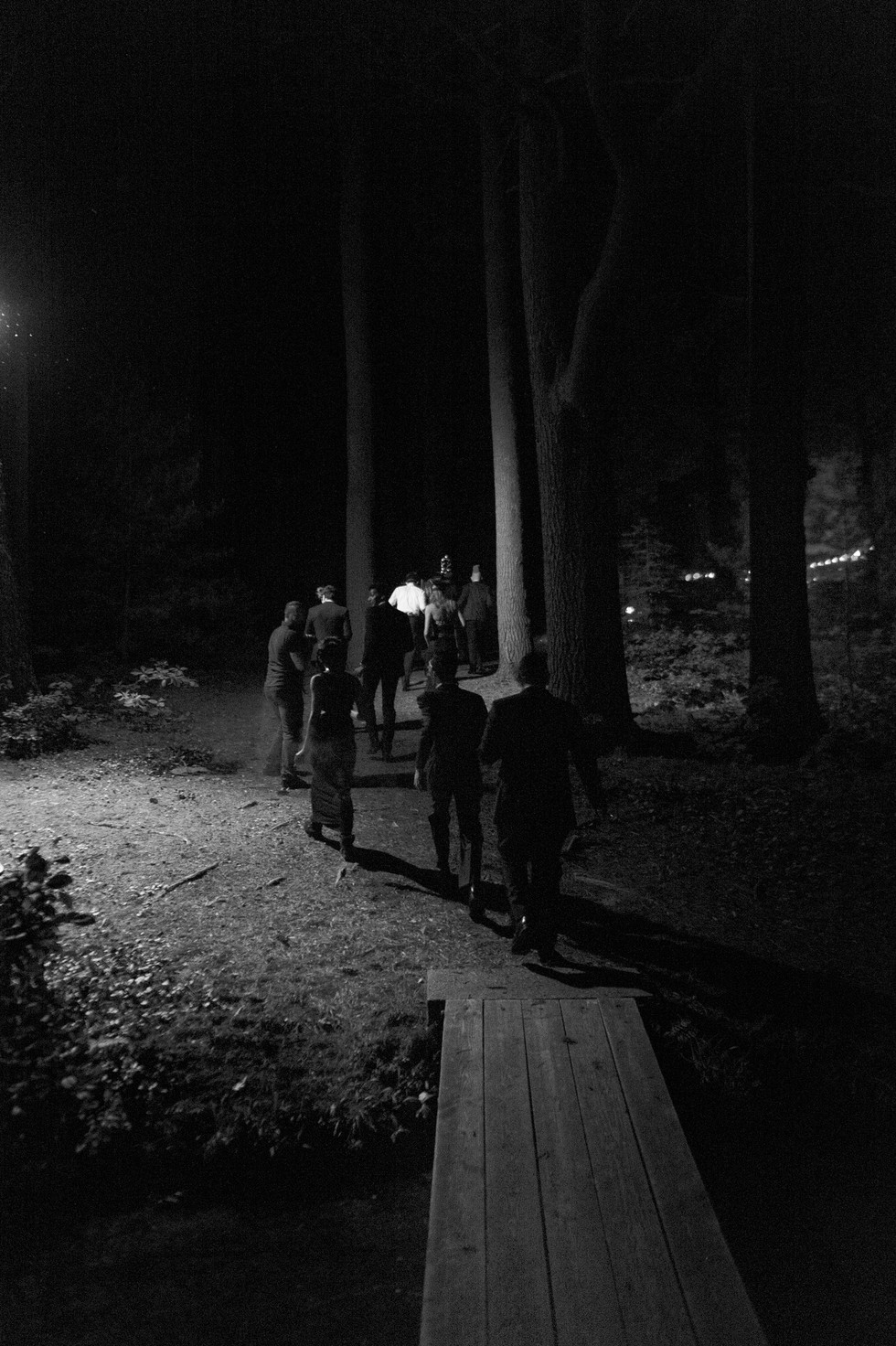 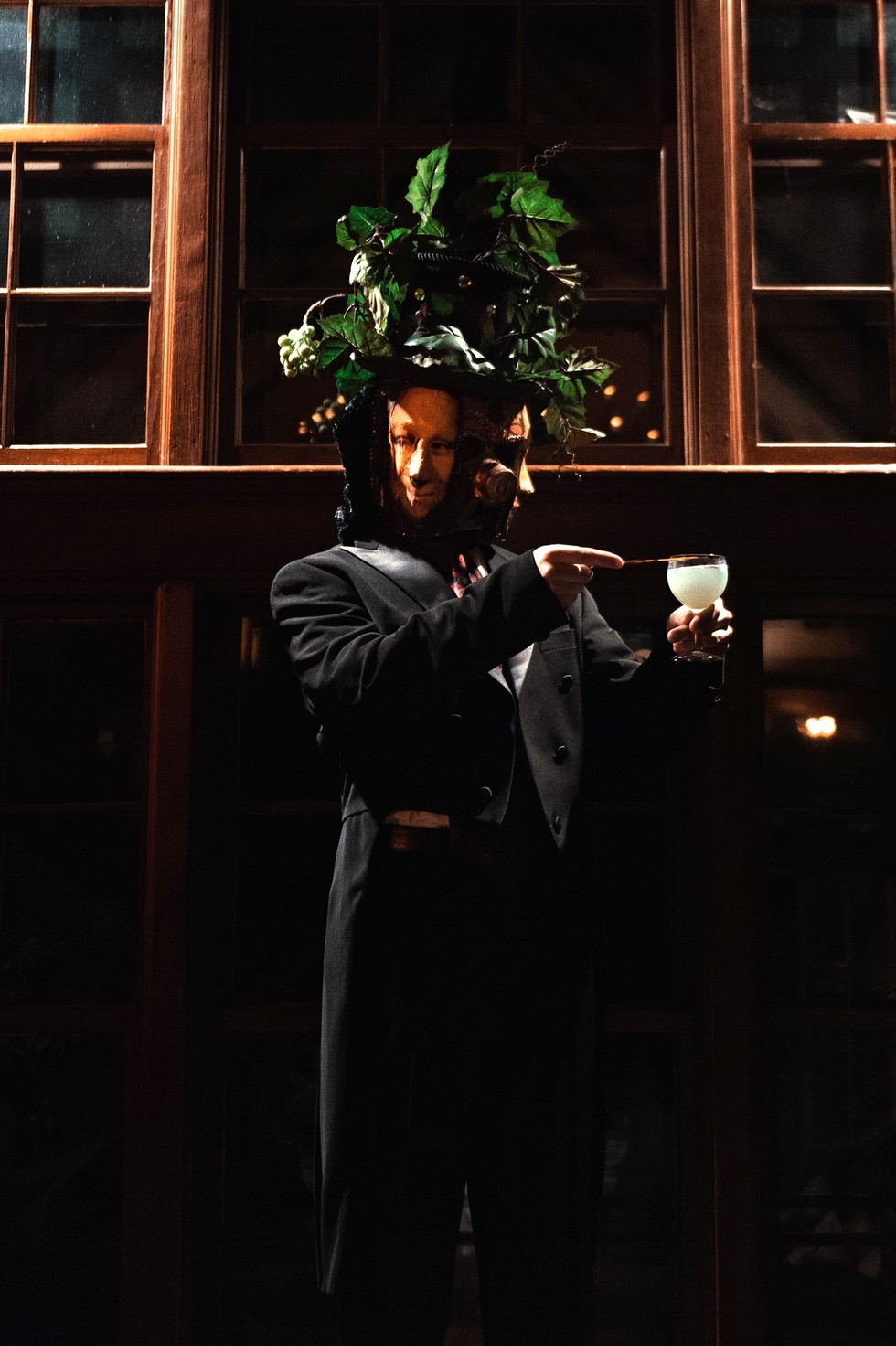 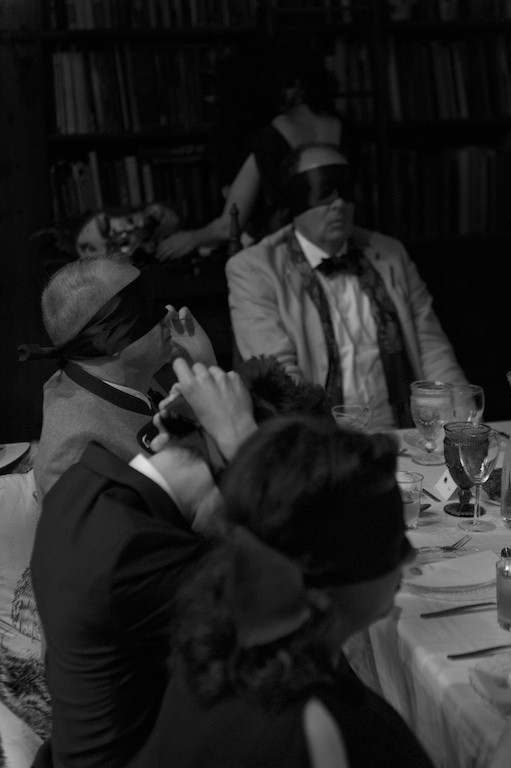 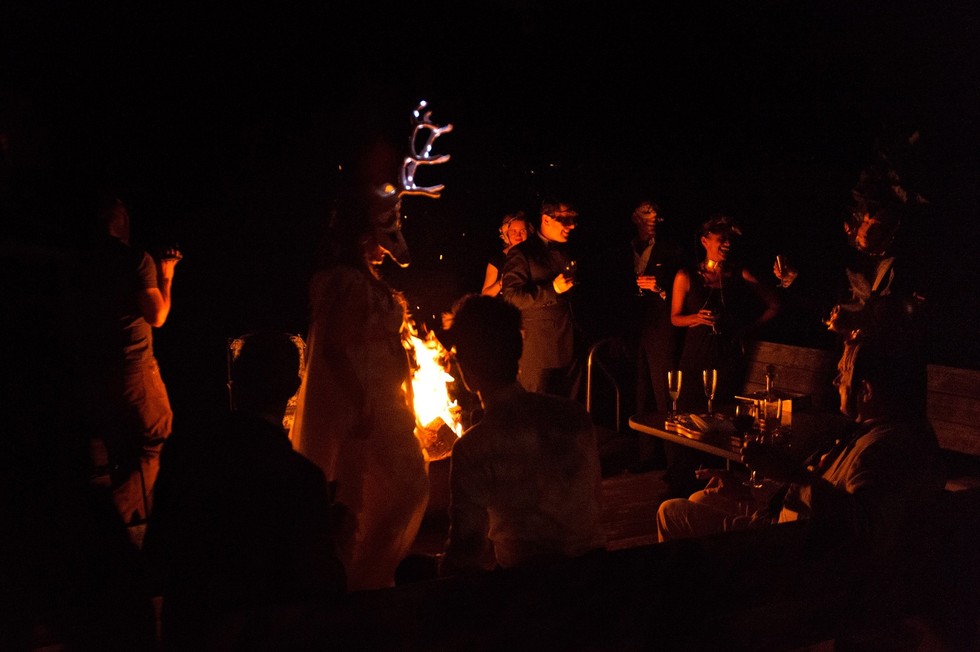 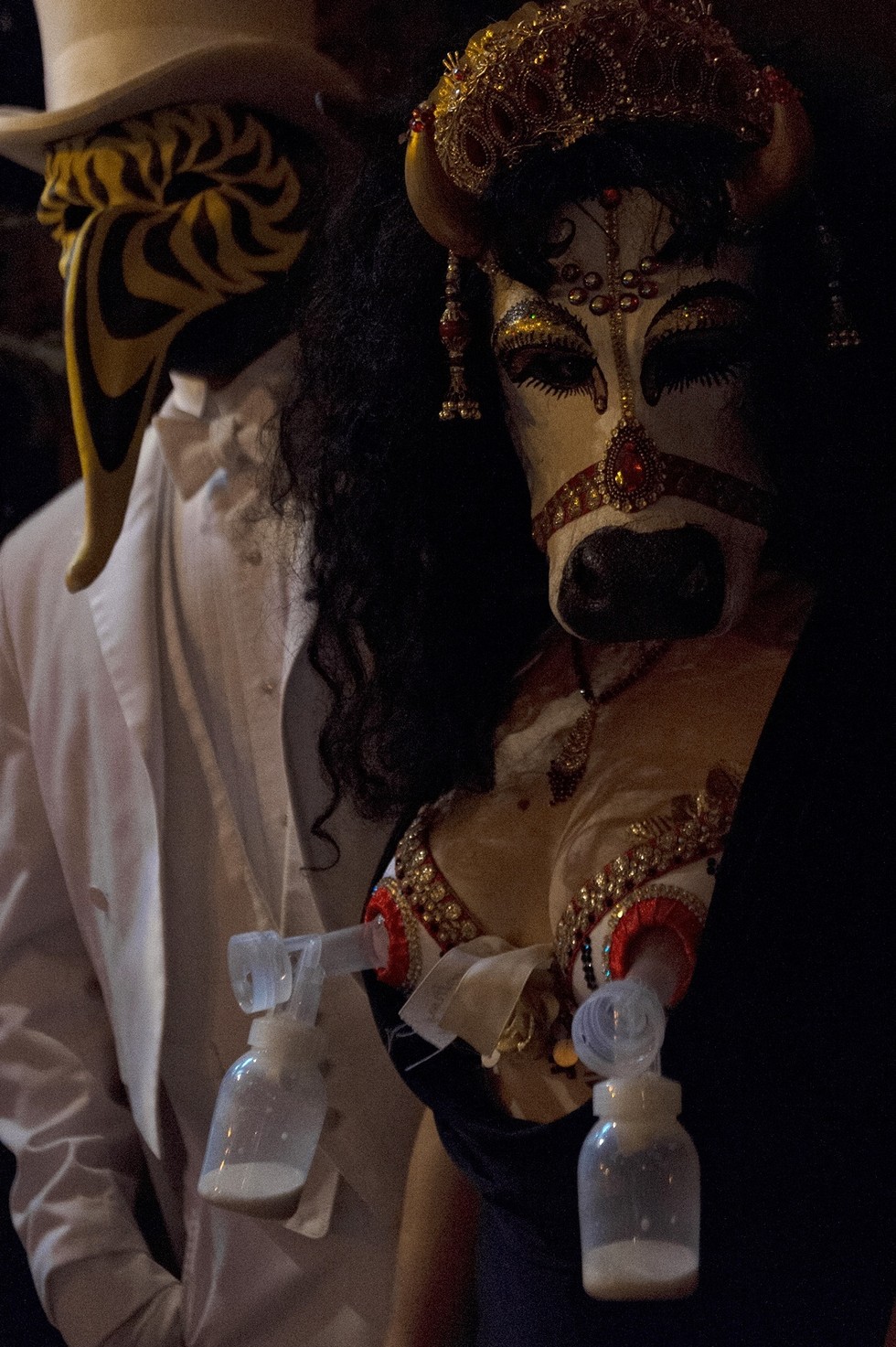 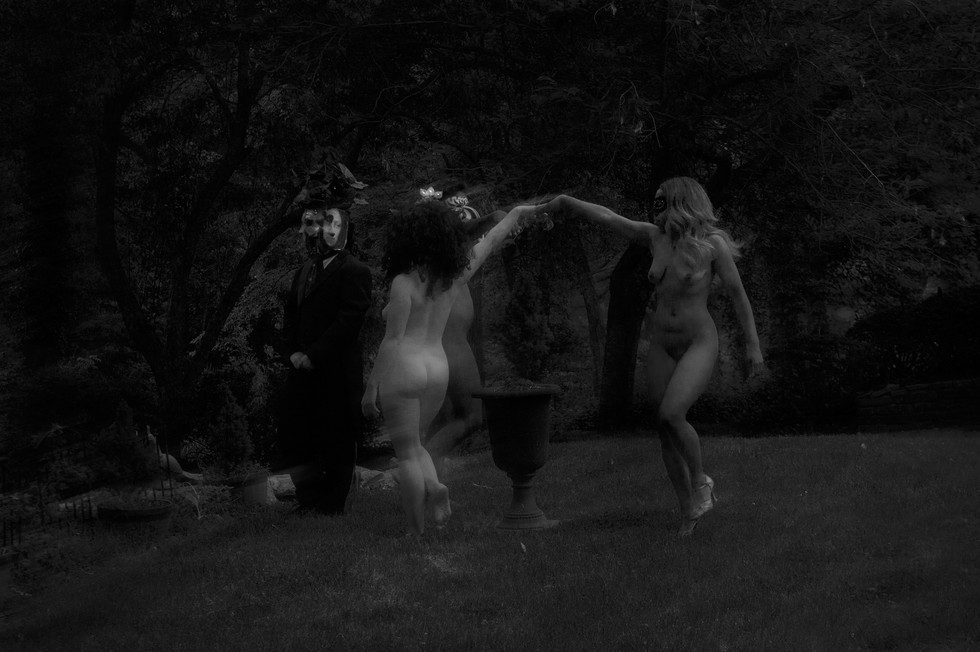 As the night progresses, the play intermittently continues while guests enjoy rich dishes that range from bites like fried carrots, to unique concoctions like a spicy black rice ball. The story revolves around the Pig King (played by Vincent Cinque), who has invited each guest to be considered to join the Illuminati. But it's quickly revealed that there's a conflict between the characters, and a sacrifice must be made (which we've promised von Buhler we won't spoil for you). The night becomes more interactive when the group leaders pull their groups out of the dining room between courses. As part of the Monkey group, we never know what the other 24 people are doing once we leave (later on we hear there are nude dances, milk baths and a person on a leash). At one point, our group of Monkeys huddles outside and decides to join the Pigs at the dock to smoke cigars.

The night weaves back and forth between these moments and the dinner so no one is ever settled for too long and Von Buhler strikes a good balance between entertaining her guests and telling a story. "I wanted to craft a night where an emotional, surreal storyline is woven through a thrilling dinner party," she says. "This allows guests to choose sides and engage in the power struggle." It gets difficult to keep up with the plot at times (especially once the booze starts to set in) but the trade-off is that everyone becomes more willing to play along and engage with the performers, the environment, and each other.

By the end of the night we find ourselves outside once more, watching the performers stripping naked and dancing. "Eroticism is one way to help people fall into the rabbit hole," von Buhler explains. "I personally enjoy watching the freedom displayed by nude dancing in the moonlight. Freedom is power and the Illuminati is all about power." It culminates with a drum circle before the actors take a bow and the guests are free to explore the estate before getting back on the bus. Though it feels like the experience lasts all night, we're only at the estate for four hours and make it back to the city by midnight.

Though part of the ball's appeal is being taken to a secluded location, von Buhler says she's considering bringing the play to the city and rewriting the narrative so it's set in an opulent Manhattan ballroom instead (her other NYC play Speakeasy Dollhouse restarts in July). While she might have to trade up her lakefront estate and all the unique and personal decorations that come with it, the immersive and interactive philosophy of the party would remain intact. She assures us, "By engaging in the storyline, our guests are transported to another world, one more exciting than the one we normally live in."

For those interested in attending the Illuminati Ball for themselves, the remaining dates are July 16th, July 30th, August 20th, September 10th, October 15th, and October 29th

Application and tickets can be accessed HERE