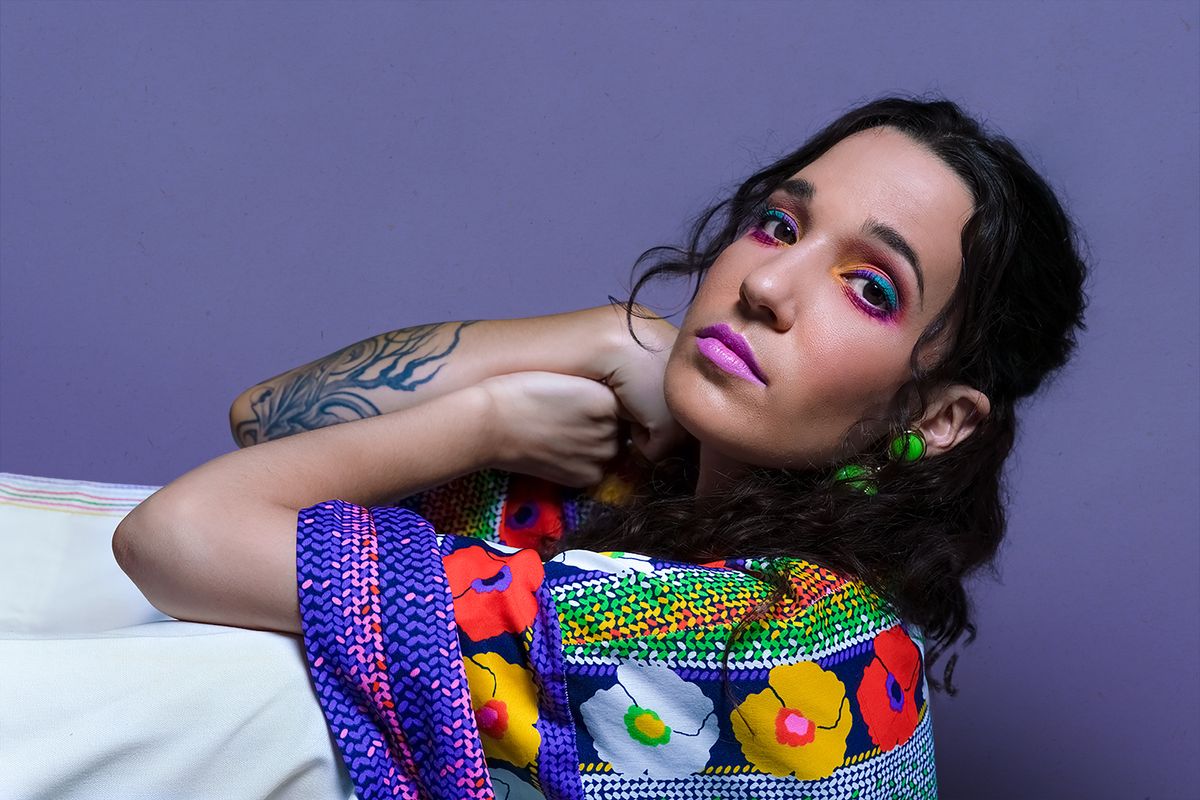 Puerto Rican artist iLe won a Grammy in 2017 for iLevitable, her stunning debut album anchored by traditional boleros — a genre that is a historically romantic one. But "boleros don't always have to be romantic," she tells PAPER. "We can speak our minds also with a bolero — even though it doesn't speak about love."

Today, iLe premieres exclusively with PAPER the video for "Temes," the second single released ahead of her sophomore record that's slated for release this spring. The subject matter of this ballad, however, is the antithesis of what one would expect from a bolero: With "Temes," iLe confronts misogynist violence.

Dilating the issue, the video for "Temes" is a slow-paced reenactment of the aftermath of an attack. It is disturbing, startling — all the while, iLe sings an inquiry into the role of fear in machismo and patriarchal oppression. "I didn't want it to be too graphic," she says. "I wanted it to be simple and direct and, in a way, defiant."

PAPER spoke with iLe to learn more about the message behind the song, the making of the video, and how the problem manifests in Puerto Rico, where 51 women were murdered last year, and at least 23 of them by intimate partners. (Eradicating gender-based violence is among the eight-part mission of Friday's International Women's Day events in Puerto Rico — iLe says she will be participating).

What's the thought process behind "Temes"?

The song is asking, If the patriarchy has to have control over us, then why do you fear me? Why do I have to be so censored? I have my own rights, so why does society and the law think that it has to have some control over us? Is there some fear in that?

You mentioned that "Temes" attempts to redefine machismo as a psychological expression of fear. I do think a lot of that comes from fear — white men especially, but men in general — of losing their power.

Exactly. And that happens in many other situations, not only with women, but with the movements for gay rights and Black people, and everything that seems "different." I don't understand it, really. What happens with these people [is they] don't take the time to try to understand what seems different to them. I take the time to understand. I think it's important for us — as a human race, as a world — to think through things. We don't like it because it's difficult for us, and maybe it could make us change our minds in a good way, but we don't want that. That's why we are auto-destroying ourselves, because we're just reacting without thinking.

When did you write "Temes"?

It was a few months ago. [Women being murdered] happens all over, but here, they had stabbed and killed a woman near the movie theater in Guaynabo [in October of last year]. I was looking for news from other places, but this one for me was very important because it had happened in Puerto Rico. I try to put myself in these situations that, in reality, I am lucky have never [happened to me]. But regardless, even though it hasn't affected me personally, it hurts me a lot. I think that's what we need to do as women, but as men as well; I don't know why or how we have been so insensitive, apathetic before all of these horrific situations. They are horrific.

It's true, there are a lot of people who won't concern themselves with the subject because it hasn't happened to them.

I've never been close to that, never in my life, but it doesn't mean that I cannot imagine that it could happen to me, and that's what I think we need to think more. It can happen to you anytime; it could be in daylight, nighttime, in the safest place you might think. It can happen to you, and anywhere in the world. I think we should put ourselves more in other people's places, and maybe that could help to understand each other a little more. When I was writing this song, that's what I was trying to do. That's what I try to do usually when I write. I know I'm in a delicate position, talking about something I've never gone through, so it's definitely difficult: I had to read a lot, I had to focus a lot, and I had to cry a lot as well, because it's terrifying to think about this.

"The song is asking, If the patriarchy has to have control over us, then why do you fear me? Why do I have to be so censored?"

I wondered if you had thought about the protest against gender-based violence in November, and whether or not you were responding to the news in December of the murder of 23-year-old Valerie Ann Almodóvar Ojeda.

It was before Valerie Ann. But it was horrible. I noticed she used to follow me on Instagram. I think I never knew her, but I don't know; we have a lot of friends in common, so maybe I did. But suddenly it felt closer not only to me but to a lot of people that actually knew her, and it was crazy — sometimes things shake us more that way, and it shouldn't be that way. When things feel closer to us, that's when we react, but it shouldn't be that way. It doesn't matter if we know her or not, it's still terrible, and it's something we need to fight against.

Here in Puerto Rico there is a problem with police indifference to gender-based violence, for sure — and some are even abusers themselves. That issue was raised at the November protest; a report had recently been released that counted 180 cases of domestic violence perpetrated by police officers.

The law is not working in our favor. There's a lot of terrible situations, in Argentina, in Latin America, where the law is blaming us. It's absurd, it's crazy, it's ridiculous, and we need to react and we need to do something about it. And when we do, they call us crazy. There's always something in the middle that doesn't want us to succeed in [fighting back]. And it makes me very, very angry. But we should feel angry, right? There's nothing wrong about that.

There's a lot more women that haven't been on the streets yet fighting against this. And there's a lot of women that are machistas. I don't blame them, because I know that society hasn't taught us right. I have friends of my own that I sometimes have to question them, and they suddenly react and say, Oh, you're right — why am I saying this about myself? About my own kind? It's something that, if we don't stop, if we don't take the time to think things through, the world is going to be more messed up than it already is.

I don't know if you saw over the weekend the post from singer Andrea Cruz that went viral? She saw a man beating a woman, called 911, and stayed on the line, over the course of 27 minutes — and the police never came.

That is so crazy. Did you know that in Russia it's actually legal to have one case of domestic abuse? If you hit your wife once, there's no problem. After the first time, then there's a legal problem. Like, what? It's really crazy. The law doesn't protect us. It's not protecting us at all. It's permitting it, even. It's not just that it doesn't protect us, but it permits it, like this is OK. This can happen, she must have done something. That way of thinking doesn't just come from men, and kids are seeing this too, and there are women who also support this — as if we were to blame for it.

And here in Puerto Rico... [what Andrea Cruz posted] is startling, but it doesn't surprise me, because the police are [worse than ever]. They've always been, but it's worse now. There's a general neglect. And the protest — people talked more about the women being crazy than what they were actually protesting. The focus is lost, and I ask myself, If it were men protesting, what would be happening? What would be the general reaction?

Right. About the video specifically now, can you tell us more about the concept?

The video was directed by my sister, [Milena Pérez Joglar]. Milena is also part of the creative team, and my brother [Gabriel Cabra Joglar, along with Ismael Cancel]. It's a big topic, but we wanted to keep it raw but simple in the video. We didn't want it to be too graphic, even though, in its simplest way, it's very graphic.

Right, the concept is graphic, but the visuals are less so.

Exactly. My sister thought about things that would be revealed little by little, how she recomposes herself after being raped by this man. It could have been her ex, could have been her boyfriend, could have been a stranger, but it's someone from an [upper] class. That was something also that we wanted to portray in the video, that it's not the usual criminal that everyone thinks about, the stereotype. It's a guy that you can see anywhere that you would never think would be capable of doing something like that. And he's walking in his own rhythm — he's not running away from anything. He's calm, because he knows nothing is going to happen to him. Because that is what the law is showing us. The law is protecting these types of people.

I appreciate that you included that — it's a subtle cue, but it's important to note. What was filming like for you?

The video is sort of dream-like — it's a reality, but it's also not a reality. I'm singing and I'm doing things that are not real, necessarily, but the situation is very real. I think it's important also to think about the women that survive [attacks] — being a voice to those that are not with us now, but also the ones that survive. So in the video, she survives.

I tried to feel alone in that street and it was terrible. I was in a shock, but I also wanted to cry a lot but I couldn't because I didn't know what to do at the moment. I couldn't even imagine. I just couldn't think, like, what would I actually do in a moment like this? A lot of things came through my mind in that moment, so it was very tough to be like that, and my hands were tied, and I was feeling very trapped in my position — and I was only acting. It wasn't real.

The end result is really powerful. I hope it reaches those people who have yet to comprehend the severity of the issue.

I know these are things that people don't want to watch. I know these are things that people prefer to ignore, but we can't ignore this. Through art, it's my way to let everyone that this is important, and we need to talk about this, and we need to do something about it. [The creative team] thought about all those things and more, and then suddenly, after we filmed the video, my sister saw the news, and that same day a woman got killed in New York. It was like, What the fuck? It's terrifying, and I don't know how we are not reacting the way we're supposed to.