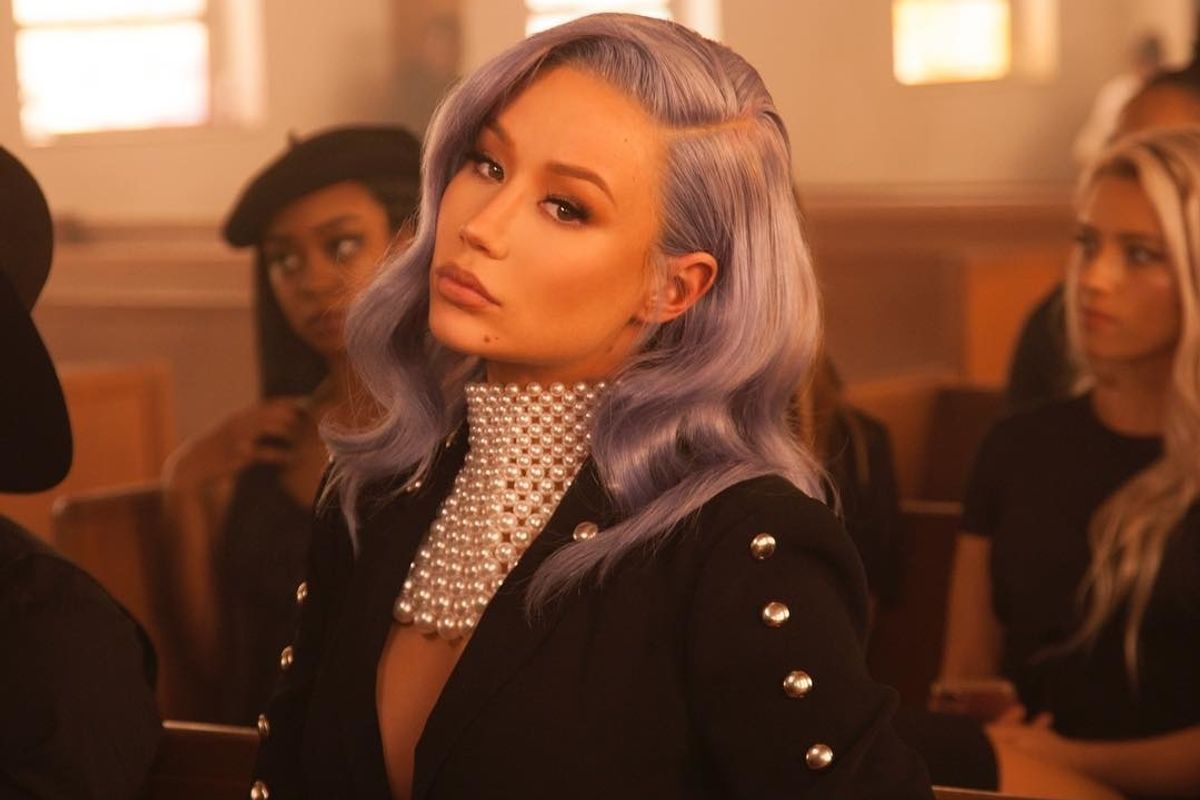 Why Is the #SallyWalkerChallenge Trending?

The Internet is ablaze with varying opinions around Iggy Azalea's new song and video "Sally Walker," which the polarizing Australian rapper says is her first official single from her long-delayed sophomore full-length album. That record is reportedly called In My Defense.

Azalea promoted the comeback video by teasing a number of stills, up to an image framing Azalea as patron saint of a "celebration of life," and including the single's official artwork, which features the artist clad in red lace, sitting atop a Cadillac with big rims, the words "Sally Walker" on the front license plate. A dark sky looms above.

Finally out today, the video leaves us (and the Internet) with so many questions. In its opening scenes, a group of young women of color strut along a stretch of highway road, swinging their hips, tossing their hair, feeling their beauty in compact mirrors. They are dressed in tartan mini-skirts and thigh-highs, seemingly referencing the visual Clueless nods of Azalea's early career.

But then something deeply strange happens. The group's self-obsessed ringleader, compact out and all, crosses the street and is promptly run over by a red Trans-Am, driven by none other than drag star Shea Coulee, who, seeing the girl's bloody body face down in the road, hops out in a pink catsuit and says, "Didn't her mother tell her not to play in the street?" And then she says, "well, at least red is her color." The camera hovers over that image for several moments, while her friends rush out to the street to collect their dead, vain friend.

There's a tag on YouTube under the video's title that reads #SallyWalkerChallenge, but fans want to know more. Skimming the video for clues, which essentially devolves into an aesthetically uniform funeral service, procession, and burial, there doesn't appear to be further hints as to what that challenge entails.

Is it lighthearted, like the City Girls' and Cardi B's "Twerk" challenge, or is it slightly more ominous, akin to Drake's "In My Feelings" challenge, during which people, a.k.a. rabid super fans who need hobbies, took it upon themselves to hop out of moving cars with the said song blaring from said car's speakers?

Or is it perhaps even darker than that: the viral Momo challenge, which caused a frenzy because people were worried that a saucer-eyed "pasty-faced bird-woman hybrid who sadly falls short of today's beauty standards" was telling bored adolescents to kill themselves? (This, as we should all know by now, turned out to be a hoax).

The Internet had some thoughts today about exactly what the mysterious, if bizarre #SallyWalkerChallenge could entail (details are forthcoming, and apparently, the winner will receive $5,000 from Azalea). Fans who are excited about the challenge online are putting coffin emojis next to their handles. "Imagine people throwing them self's [sic] in front of cars," one Twitter user noted. "So what she's saying is we should get hit by cards huh," another said.

#SallyWalker video is 🔥 but I wouldn’t encourage a sally walker challenge. Imagine people throwing them self’s in front of cars 😂😂
— jose (@jose)1552658386.0