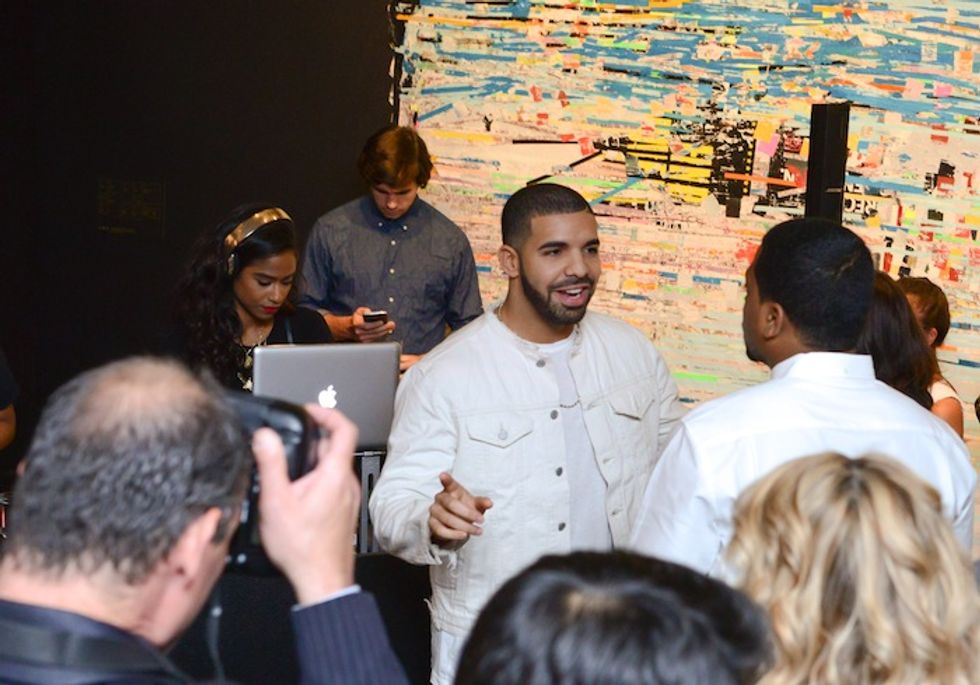 "If You're Reading This It's Art": Everything We Saw and Heard at Last Night's Art Openings (Incl. Drake)

by Kate Messinger
PAPERMAG
Art x Fashion, Art x Music, Art x Celebrity -- we're no longer surprised by collaborations happening across genres. Last night's art events were a kickoff to the intermingling of species that usually come with NYC Art Week, which begins with Frieze fair opening next Thursday. In Chelsea, openings brought select crowds, but an eerily low energy. The buttoned-up Upper Manhattanites at Morgan Lehman's Kim McCarty show were content to be in one place, observing her beautifully delicate large scale watercolor portraits and playing on the hand-crafted dominoes table, part of Edra Soto and Dan Sullivan's exhibit in the back room. Yancey Richardson Gallery drew a younger crowd showing Matthew Jensen's Instagram-ready photography focused on images of the sun, either reflected on water from an aerial view or blaring out in a white heat. The room felt hotter too -- it matched the imagery, yes, but also increased the sluggishness of an already quiet Thursday night. Where was everyone?

It only took two subway transfers and a 15 minute walk to find out where the art world elite were hiding. Across the island and 50 blocks up, Sotheby's S|2 gallery had created the ultimate concoction of art world collaborations: a large group show of many iconic African American artists, from Basquiat to Kehinde Wiley to Kara Walker, with a soundtrack curated by the one and only Drake (and, like seemingly every other party in this city these days, sponsored by Beats by Dre). With individual headphones next to the artworks, I Like It Like This allows the viewer to experience both the visual and auditory in a clash between high brow auction house art and hip-hop music chosen by a contemporary rap star. A regal Kehinde Wiley portrait pulses with power when paired with ASAP Rocky's "Multiply"; Nick Cave's vibrant soundsuit seems like it could have never existed without the corresponding sounds of Kendrick Lamar's "Fuck your Ethnicity." Whatever Drake's prior knowledge of art may be, his curated sounds are, surprisingly, as powerful as the works themselves. So much that you can almost imagine him alone with each piece, listening intently to the art for inspiration, perhaps shedding a signature Drake tear.

Betye Saar and Drake
At last night's opening, however, there was little opportunity for the attendees to listen intimately to the sounds he'd so carefully chosen. Who can be bothered by art when the deity himself is right there in the room? When Drake arrived to his own opening, a bubble of body guards moving around him, and it all made sense: this is why you travel all the way over to the last avenue on the Upper East Side (that and for the mini tacos and mac and cheese squares being served). Vashtie, who Drake handpicked to DJ the event, played similar tunes as those on the headphones, but the intimacy of the one-on-one art/sound experience was gone. Club kids, gallerists, rappers like Swizz Beatz, an absurd amount of people in wide-brim hats, and buzzy photographers and artists like Michael Avedon and Jeanette Hayes milled around waiting for Drake to do something. Sometimes he'd go look at a piece of art and whisper something to his friend bubble, sometimes he'd take a picture with a fan.

But mostly, Drake just stood at the DJ booth in his white denim jacket looking very sad. Was he upset that no one was listening to his hand picked art sounds? Was he missing his Instagram girlfriend? At one point a small woman with long grey hair came over and touched his arm, the body guards miraculously parting for her entrance. It was the artist Betye Saar, whose piece, Birth of the Blues, was featured in the show. Drake bent down and gave her a hug, smiling for what could have been the first time all night. Maybe he wasn't sad, maybe he was just bored.