I Scream, You Scream

New York-based power-popsters The XYZ Affair (not to be confused with the 1797 incident that almost led to a war between the United States and France) are on the verge of something big. In the wake of last year's stunning debut "A Few More Published Studies" (which was accompanied by a music video for their single "All Our Friends" that featured cameos by some very notable former Nickelodeon stars), they are recording three new songs this summer, playing a Music Hall of Williamsburg show on June 10 and in the more immediate future, as in this Thursday, they are playing a PAPER + Campari Guggenheim Young Collectors Council party. When they aren't creating raucous rock music, they enjoy eating ice cream. Here's their guide to the best and brightest of the New York ice cream world.

As a serious fan of sweets (ice cream in particular), I take this choice very seriously. Sundaes and Cones is definitely top of the pops. Sometimes when it's really hot out, or even when it's not, I want ice cream that isn't quite as heavy as typical ice cream flavors can be. That's why this place is perfect. My two consistent favorites at Sundaes and Cones have been coconut and mango, both of which taste amazing. There are actual bits of coconut in the coconut! Separate from the wonderful flavors, I'd like to recommend this place to all the guys out there for a first date spot. A) Girls will think it's cute that you like ice cream so much; B) It's way more affordable than a fancy schmancy dinner (and in my case, it doesn't require me to special order things without sauces as I frequently do at nice restaurants because I'm a troglodyte when it comes to food); and C) You'll look super cool when you walk by the Ben and Jerry's a block away and say, "No, baby. There's this little spot I know of right around the corner with way better flavors. The coconut has actual bits of coconut in it!"

Cones brings me back to my days as a 7-year-old, when one of the more torturous decisions forced upon me on warm summer evenings was 'which flavor do I get at the local ice cream shop.' For better or for worse, I am no longer under the watchful eye of my mother, and a trip to Cones in the West Village invariably culminates with a triple-stacked cone. Cones is one of a small group of non-chain ice cream parlors in New York, where the creation of each batch of heaven is treated with care and respect. The consistency of the stuff is creamier than anything, and the flavors are just shy of being overwhelmingly rich. Perhaps we'll run into each other there -- I'll be the guy pouring sweat and trembling with expectation.

In a city rife with gourmet-specialty-vegan-fair trade ice cream shops, it would be easy to overlook a vendor as common as Mister Softee. But I challenge you, New York, to find a more satisfying source of frozen delicious. Why bother struggling with scores of choices like "tiramisu-wheat grass" or "vanilla-lychee?" Mister Softee gives the people what they want: soft serve in vanilla, chocolate and strawberry. Want two flavors at once? Have a swirl. Want a sundae or a milk shake? Mister Softee has plenty in his truck. The bottom line is, Softee delivers perfect summer refreshment in a cardboard flavored cone. And his mastery of frozen confections is further proof that unless what you're eating came from something with wheels, it's probably not worth eating.

To call Emack & Bolio's ice cream homemade would be a near insult. I couldn't make ice cream this good at home. I'm guessing you couldn't really either. They only use milk from cows that aren't being injected with hormones, they don't add anything that wouldn't naturally be there in the first place and they really seem to take pride in making good shit. They've got a ridiculous selection of flavors. My palette is a pretty simple one so it's either strawberry or their white mint chip for me, usually two scoops on a cone because I'm a glutton. But if you're into the freaky stuff, they've got you covered. Apparently E&B were the first to combine Oreos and vanilla ice cream back in the day. Where would your 8th birthday's ice cream cake have been without that shit? Nowhere. That's where. 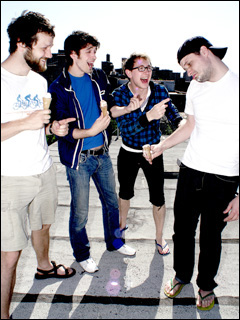