I Dream of Gena

"There's such a thing as loving too much," declares legendary film actress Gena Rowlands.

She's talking about her role as a devoted housewife in her late husband director John Cassavetes's classic film A Woman Under the Influence (1974), but maybe she's also dropping her zealous fans a hint. When she appeared for a Q&A moderated by director and film historian Peter Bogdanovich earlier this month at the Brooklyn Academy of Music, the still-radiant 75-year-old Rowlands certainly found no shortage of love. Before the conversation even began, she got an instant standing ovation; afterwards, a scruffy film student approached Rowlands just to drop the L-bomb -- several vociferous times. If Gena Rowlands is loved too much, though, she reacts with only dignity and grace.

Rowlands and Bogdanovich addressed the audience at a sold-out screening of A Woman Under The Influence, the first installment in a recently concluded Rowlands film series at BAM. Featuring one of Ms. Rowlands's iconic performances as a dame of extremes, A Woman Under The Influence depicts slightly mad suburban housewife Mabel Longhetti, whose growing estrangement from her pit-bull husband (Peter Falk) ultimately leads her to slash her wrists while singing the theme from "Swan Lake." As Bogdanovich told the BAM audience, "It was the most heart-wrenching thing since I saw Long Day's Journey Into Night in the '50s. I came out [of the theater] and John [Cassavetes] and Gena were out there smiling. Gena said, 'You liked it?'"

Though many others left Cassavetes's films with their minds blown, few initially shared Bogdanovich's appreciation. "I don't think anyone understood John's movies when they first came out," Rowlands said in a phone interview before the screening. "They just went against the grain of the movies being done at the time." Unlike the idealized, larger-than-life movies of his day, Cassavetes's first movie Shadows (1959) evolved from the intimate improvisations of an acting workshop he taught. At the time, he had just graduated from the New York Academy of Dramatic Arts. There, he met and married Rowlands, who had already made her screen debut in JosÃ© Ferrer's light romantic comedy The High Cost of Loving (1958).

Cassavetes went on to establish a model of independent movie-making -- funding and distributing his own films by hook or crook -- that has since inspired several generations of filmmakers. He won over a dedicated group of actors, including Peter Falk and Ben Gazzara, who made successful forays into Hollywood and television, but often returned to Cassavetes for his nourishing roles and cryptic but inspirational directing.

Despite the extreme roles they created, Cassavetes and Rowlands never presented caricatures. With her tragic clowning in A Woman Under the Influence, Rowlands gave Mabel a streak of self-awareness -- a streak of amused resignation to the fact that she'd never, ever "only connect." Her self-aware funny-faces were an eerie predecessor to Bill Murray's version of disaffected humor. Even in Gloria (1980) and Opening Night (1977), in which she respectively played a gangster moll and an unraveling actress, Rowlands managed to add charisma, profound complexity and exquisite sensitivity to otherwise severe roles.

Fifteen years after John Cassavetes' death, the film bug lives on in his immediate family. Daughter Xan wrote and directed the short film Dust (2000); Coppola-scenester Zoe has had a hand in directing, producing and acting; son Nick has appeared in over 30 films, beginning with his pre-teen debut in his father's Husbands. As a director, Nick collaborated with his mother in Unhook the Stars (1996) and The Notebook (2004). "At six foot six and a half," says Rowlands of her son, "Nick was always going to be a basketball player. I certainly hadn't expected him to be a director... But, it's very easy working with him, because he had that same love for actors that John had."

Not all the Rowlands films screened at BAM were a family affair. She appears in Woody Allen's Another Woman (1998), playing a writer who overhears the sessions of her neighbor, a therapist. (Who else would Woody choose, a priest?) Says Rowlands of Allen, "He's cursed with the ability to make people laugh. So when he makes a serious film, it's not as well received. But from an acting point of view, it was a terrifically interesting picture."

It's telling that a picture can be difficult, maybe even unsuccessful, yet Rowlands can find it a rewarding experience as an actress. Perhaps her deep love of acting keeps her afloat; when asked if she wants to do anything other than act, Rowlands simply says, "No. No. I'm very lucky that way."

So she just keeps on acting. Most recently, she filmed the 6th arrondissement segment of the upcoming Paris, Je t'Aime (2006). "From each district in Paris," says Rowlands, "there'll be a five-minute segment about love, any kind of love -- your baby, your dog, your husband, your lover. The idea being that, at the end, you see Paris just intermingling with... love."

Paris? Meh. From the adulation of indie bands like American Music Club and the Gena Rowlands Band, to the ecstatic, sold-out reception at BAM, Gena Rowlands has plenty of love right here in the States. 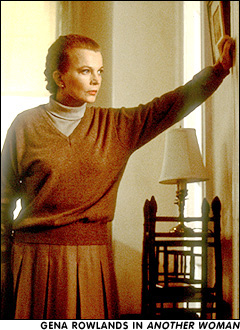 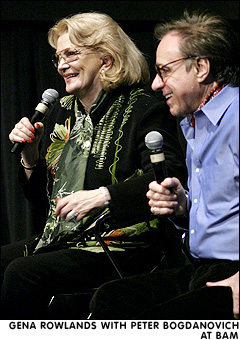