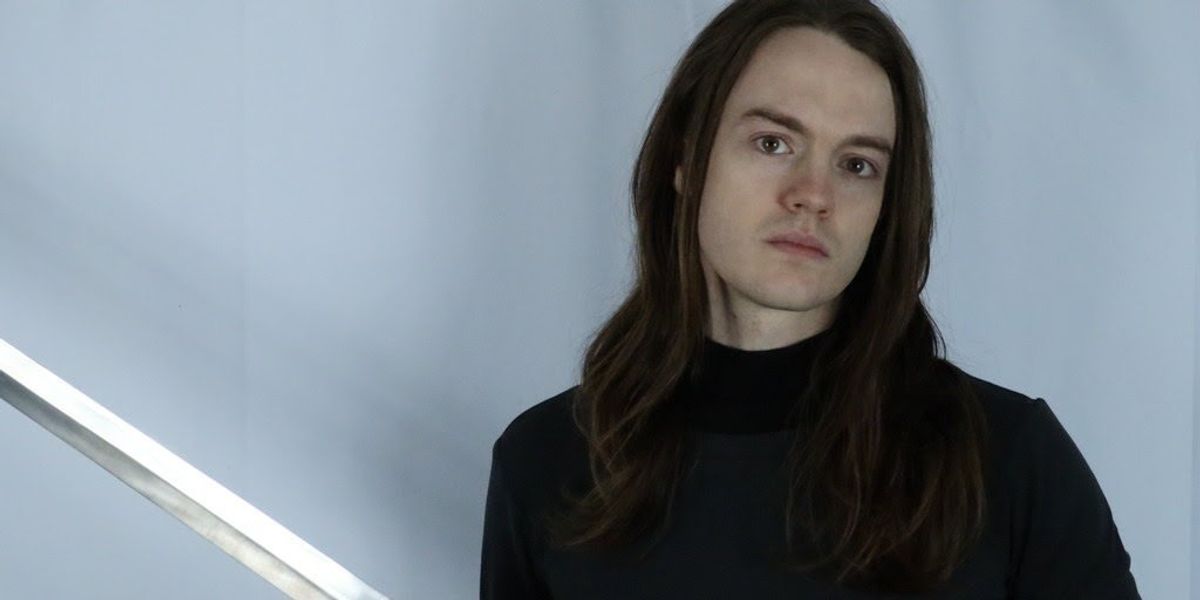 Hunter Hunt Hendrix is primarily recognized as the frontman for brainy black metal outfit Liturgy -- however, in between tour stops, it also turns out that Hendrix works on a solo electronic project, the fruits of which will finally be released in July under the "Kel Valhaal" moniker.

Drawing influence from genres as disparate as Southern rap to speed metal, and ideological dabblings than extend from German Romanticism to American Transcendentalism, it all ultimately feeds into an overarching, if-somewhat-fragmented mythology he's created via the forthcoming New Introductory Lectures On The System of Transcendental Qabala, which will be released digitally and via a web-based book that will elaborate on the Kel Valhaal story.

For now though, he's just eager to clarify that Kel Valhaal is far more than just music -- even if the gritty "Ontological Love" is a sonic centerpiece of his new album. A ten-minute occultish grinder that oscillates between delicate bell nodes and punishing synth rhythms, it's a strangely rapturous exploration of the indecipherable via ample distortion and dramatics. As such, we wanted to find out more about the project's origins and spoke to Hendrix a little about the forthcoming release, as well as how the Internet has transformed DIY, his fascination with the darker side of spirituality and how philosophy is poised for a comeback.


If you could distill the difference between this project and Liturgy, what would you say?

[Kel Valhaal] is similar in a lot of ways [to Liturgy] -- in terms of being interested in combining motifs from electronic music, metal and rap. Rap in the vein of Three 6 Mafia. And Southern occult sort of things. That's also been a big part of more recent Liturgy stuff. Like channeling that vibe in a more experimental context. I think combining with noise and [the feeling of] Romanticism...both projects are driven by this patchwork of influences, but this is the electronic one.

So Kel Valhaal has been in the works for a couple of years now. Why decide to do a formal release now?

I've been getting better at making electronic music over the past two years or so. I started doing more electronic stuff -- learning to use Ableton and getting a midi controller -- while composing Liturgy songs over the past couple years and finally kind of got good enough [that the songs felt okay] on their own. I had all this material that I wanted to release. All this music was made while on tour just sitting in the van. I just kind of mastered it and put it out.

You've written about underground electronic music becoming political, but does this apply to Kel Valhaal? If so, what kind of contemporary issues are you trying to address?

I wonder if [this project is] political, but I'm not sure that it is. I think of it as confrontational and emotional. I think more spiritual than political. Or at a place where politics and spirituality combine. I'm interested in a space between politics and alchemy.

Those are definitely two polarities you don't typically see juxtaposed.

You don't always see them juxtaposed, but they are.

...So then where do they diverge?

I guess it has to do with transformation. I think transformation is a really key dimension of things. And I'm not as interested in the exact nature of the transformation, but in the transformation itself. It's more about the means than the ends. It's vibrating in a way that opens up possibilities. I think part of what [I meant when I said electronic was inherently political] is that music can [physically] open up that space directly by its structure -- rhythms, Pitches, and resonances. It can also [open spaces] socially through the structures that exist for transmitting these things. Music can awaken identity or undermine identity -- it's not just the sound, it creates a way of life or presuppositions about how the world should be.

I'm interested in where these are joined together. But it's also in the context of this ecological crisis and that's where alchemy comes in in a way.


How would you define the ecological crisis of today? What issues are you concerned with?

Global warming. I'm very influenced by Joseph Beuys, who was active throughout the 60's and 70s. He was kind of an 'art shaman.'

He was originally associated with the Fluxus movement but then kind of did his own thing. He was very connected to Rudolf Steiner and German Romanticism. He was channeling these forces in a way that seems old-fashioned or imaginary, but were also engaging with contemporary culture and actual things that are happening.

Going back to the politicization of underground electronic music as of late, I'm curious to know where you see rock and other guitar-oriented music fitting into all this. After all, Liturgy is metal.

I think rock has the same power that it always has, it's just not as convenient to make rock music. It's the rise of social media, iPhones, laptops that changes the landscape a little bit. I don't know if rock will be more powerful in the future though. I don't know what's going on it's a really weird time.

Social media is definitely an interesting place to bring that in. How exactly do you think social media is changing the landscape of music media and the dissemination of this underground club culture, this DIY culture?

It's making it easier for DIY to be global. I think black metal, ironically, was the first DIY cultures to really be global. That was before the internet was even that big. But now anything can be global. A little bit less mediation between people who listen to music and people who make it.

Just out of curiosity, I know that this project and this Liturgy are based on pretty heady manifestos, and you've written extensively about both. But have you ever worried about alienating your audiences by being academic and, therefore, somewhat inaccessible?

No. I mean I'm very interested in philosophy. But I also don't think academic is the word for it.

Well I'm sure you see the comments on the Liturgy Facebook. You have some haters, and a lot of it seems to stem from like "What's this art stuff?".

Yeah, I don't know what to do about that. But I've been really deliberate about wanting to not compromise with what my project is, and so part of that is putting up with people not just not understanding it, but still knowing about it and caring about it -- but maybe not respecting it. I don't know, I'm just going to keep going with it. A lot of that [hate] with Liturgy especially comes from a misunderstanding about where I'm coming from in the first place. Liturgy first emerged as a black metal band, but that was never my identity as a person. It was only possible for that to even happen because of the Internet. My background is in art and philosophy and the underground of New York since I was a teenager. I just keep going with it and try to let it unfold. Part of what this project does is open things up a little bit and make it more obvious where I'm coming from, and that doesn't have to do with the metal scene even though that's the style of music. Not that the electronic music scene is that connected to philosophy or anything....Well, to me it is, but it's also difficult to communicate 'how' sometimes. But it's changing right now.

I think in the way that music is distributed, in that it's easier for people to experiment with those kind of sounds. I studied a lot of avant-garde classical music and stuff like that. It used to take a building full of vacuum tubes to experiment with sound. It's very much easier to do it just with your hands and a keyboard and that's cool because these things become more familiar and there's something liberating in that. Sound is really powerful. I don't totally understand why, but I think the more you can experiment with sound and transmit it, the better. I just have a good feeling about that.

I mean that's a really good ending note, but is there anything else you'd like to add about the record itself?

I didn't realize it was a multimedia experience. Tell me more about the website. Are you designing it? What components are going into it?

It's a website that's a book. It has six chapters and each chapter has a diagram and a topic, but the chapters are like a series of blog posts. They're RSS feeds and so they're made up of topics that I continuously turn to again and again and approach from different angles. It's like a real time online book being written, and you can read it while it's being written. And it's also an album.

Have you picked out the RSS feeds yet?

Yeah, it's going to go up online in a couple of days. Maybe we should have made more of that in the press release.

Cool, is this your first foray into multimedia releases?


Yeah, it's been something I've wanted to do for awhile and this is the first foray into actually doing it. It's been awkward to release records here, and then write little essays that sometimes get posted by [niche] music sites. But [both projects have] entirely different audiences and I'm trying to get them more integrated on the Internet itself.

New Introductory Lectures on Transcendental Qabala is out July 15th via YLYLCYN.