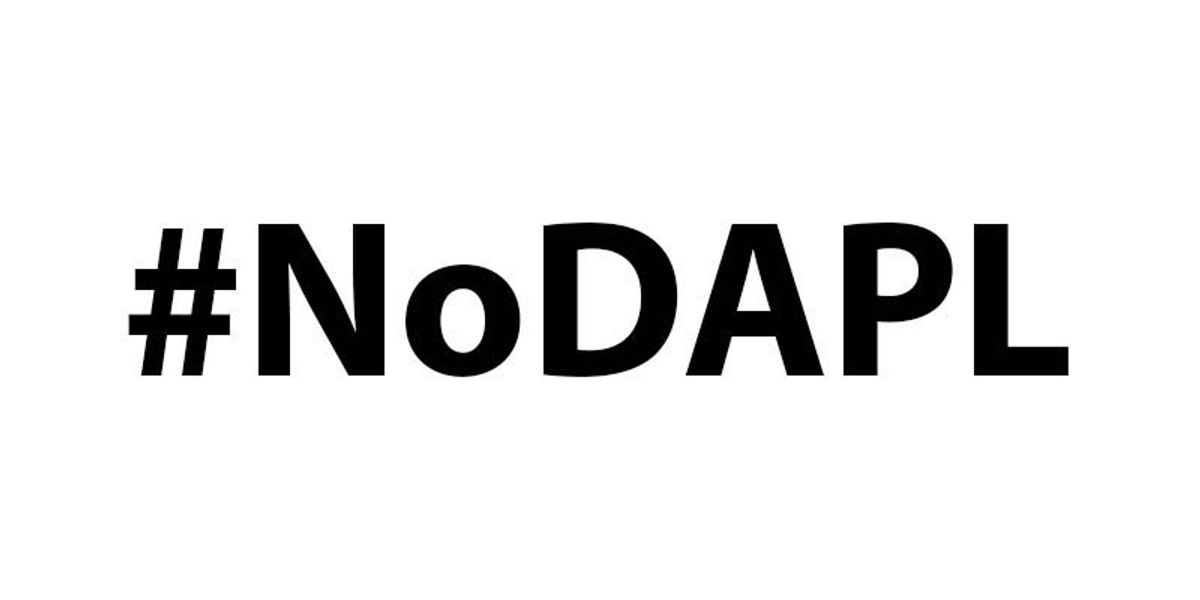 UPDATE: Seven Things You Can Do To Help The Dakota Access Pipeline Protesters

As you probably know by now, the Standing Rock Sioux have been engaged in a protest against the construction of the controversial Dakota Access Pipeline, which will destroy sacred sites, and pose a huge ecological risk that extends to potentially poisoning their water supply. There's a lot that's fucked about this situation, including the social and racial dynamics surrounding its approval, the arrests of hundreds of peaceful protesters and the geo-targeting of prayer camps by the Morton County Sheriff's Department via Facebook check-ins (which is probably why you've seen all your friends checking in). But it's also been difficult to figure out how to help activists and show support for the protest, thanks to what many are calling a media blackout by several major news networks. So in lieu of traveling to North Dakota to protest alongside the Standing Rock Sioux, we've created a running list of the most effective ways of helping the #NoDAPL protestors right now.

Oceti Sakowin Camp is where a majority of people at Standing Rock are currently gearing up for their winterization effort. The camp is in severe need of specific supplies like wood, sleeping bags, yurts and more. You can donate money via Oceti Sakowin's PayPal to help fund the purchase of these items.

Editor's Note: A previous version of this article directed donations to Sacred Stone camp. However, after having reached out to sources at Standing Rock, we have been told that supplies and donations are more immediately needed at Oceti Sakowin.

Donate to the Standing Rock Sioux

The Standing Rock Sioux are currently soliciting donations for legal, sanitary and emergency purposes. You can donate via the Stand with Standing Rock website.

Call the people in power

You can call the people who have the ability to do something.

C. The executives at Energy Transfer Partners, the company building the pipeline.

As brought to our attention by BrokeAssStuart, UCSF's Do No Harm Coalition is setting up the Mni Wiconi (Water is Life) Health Clinic, which is a free, integrative and volunteer-based clinic that seeks to provide care to everyone in the Standing Rock Sioux reservation. They are currently raising funds to open the doors, obtain equipment and medications -- an essential component of the protests as there is no local healthcare access for the people assembled at Standing Rock. Donate here.

UPDATE: Donate or Volunteer to Help the Medic + Healer Council

In the wake of horrific, militarized police attacks on peaceful water protectors, the Standing Rock Medic + Healer Council needs your help more than ever. The group coordinates medical supplies, resources and other forms of aid to the camps at Standing Rock, Indian Health Services, the Standing Rock Tribal Council and the aforementioned Mni Wiconi clinic. They are currently taking monetary and supply donations here.

If you are a qualified medical professional or healer, you can also send in an application to come and volunteer. Currently the group is looking for certified medics, EMTs, nurses, physicians, herbalists, midwives and massage therapists. They are also seeking volunteers who can provide logistical help re: supply deliveries. Submit your application here.

Editor's Note: There is also a GoFundMe for water protecter Sophia Wilansky, who was critically injured during Sunday's standoff and will now have to undergo extensive surgeries. The funds raised will go toward her medical bills.

Call/leave a message for Sheriff Kyle Kirchmeier prostesting the orders he's given to use militarized force against peaceful protesters at 701-667-3330.