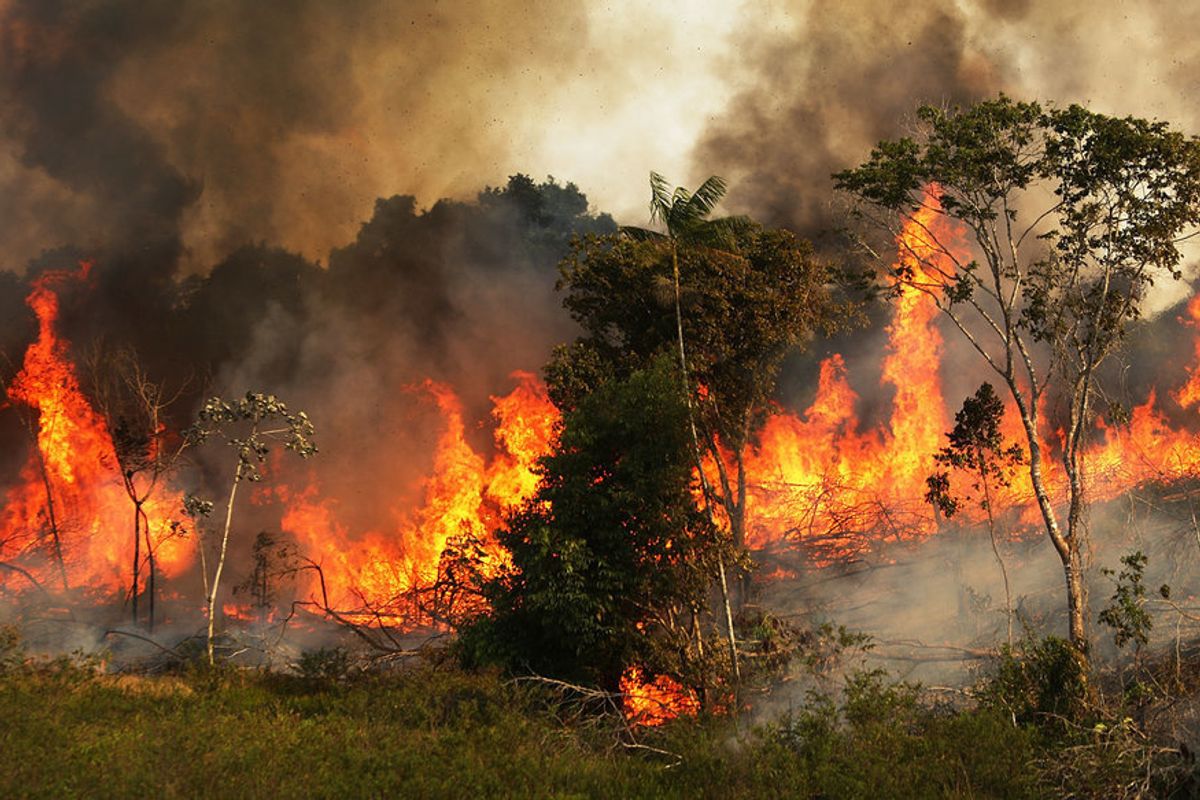 How to Help Fight the Amazon Fires

If you've been online recently, you've likely seen the photos of the lush Amazon rainforest set ablaze, puffing towers of smoke. The natural disaster isn't just devastating for the one million Indigenous people and three million species that the Brazilian part of the forest is home to, but everyone on earth who drinks water and breathes air. As has become a rallying cry — the Amazon is the Earth's lungs, producing more than 20% of our oxygen, and 20% of our fresh water.

The forest's destruction — undeniably the latest catastrophic result of the warming climate given that 2018 saw an 84% increase in Amazon fires — is everyone's problem. Stopping it will take more than prayers. Here are a few ways that you can help.

Conservation groups that partner with Indigenous peoples and frontline communities — who are experiencing the worst consequences of the fires and are working to stop them — are the ones to support. The Rainforest Action Network, specifically, their Protect-an-Acre program gives directly to indigenous communities. Amazon Watch are also whistleblowers who support indigenous-led solutions. $10-$15 can go a long way.

The fires were started by farmers clearing land for illegal cattle ranching. Some of the most effective longterm measures against deforestation are community farming initiatives, like those of the Rainforest Alliance, which trains people in sustainable forestry and builds relationships that generate revenue for locals and keep the forest safe.

Commit to only buying from sustainable companies, which you can find through the Rainforest Alliance's handy search function. Supply chains are long and complicated, but many, lead back to deforesting practices.

Stop eating beef (and maybe other stuff too).

Cattle ranching is one of the primary drivers of Amazon deforestation, and rainforest beef is often found in fast-food hamburgers or processed beef products. Taking your business away from the beef industry can make a difference. It's become a cliché, but the fact is, eating vegan or vegetarian is better for the planet, given how high the livestock and dairy industries' emissions are. If the pictures of the fires disturb you, consider it.

Sign petitions to investigate the fires, and demand the Brazilian government to protect the forests.

President Jair Bolsonaro "has sought to dismantle Brazil's environmental protections and agencies and ramp up access to mining concessions, especially on protected indigenous land," reports Foreign Policy. In the wake of the fire, he's simply said that Brazil cannot fight them, and has been spreading conspiracy theories that NGOs and his critics set the fires to humiliate him.

Gabriel Santos, a lawyer in Rio Branco, Brazil has accumulated nearly a million signatures on Change.org to mobilize an investigation into the fires and asking the government to make land clearing by fire illegal.

Greenpeace is also circulating a petition demanding the Brazilian government take action to stop the fires.

Register to vote and support leaders who embrace bold action on climate change.

If you don't live in Brazil and can't vote against Bolsonaro when the time comes, check out the NRDC Action Fund's ranking on the 2020 Presidential candidates records on climate change. TL;DR: Fast Company ranked Jay Bernie Sanders, Elizabeth Warren and Jay Inslee the best candidates on the issue. It's also crucial to vote for climate-friendly leaders of your state and city. Check with your state or local election office or the U.S. Vote Foundation for elections coming up in your area.