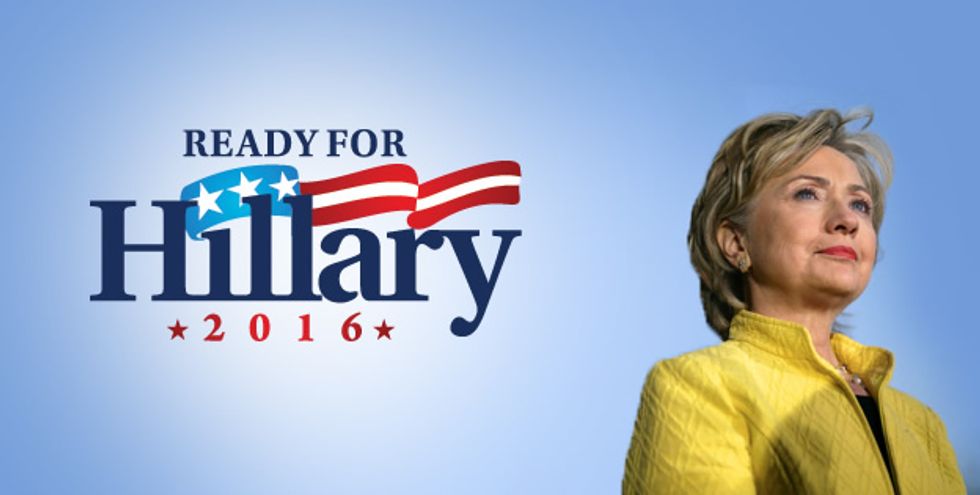 How to Dress Your Entire Squad Like Hillary Clinton for Halloween

Yesterday, we told you how to get your entire squad to dress up as different iterations of Kim Kardashian for Halloween. Today, we move on to someone with, if anything, an opposite sense of style -- Hillary Clinton. She's not the first person you'd think of as a style icon, but she's been one of the most important people in the country for decades, and has maintained her very own particular sort of normcore-ness throughout her tenure as First Lady, a senator from New York, Secretary of State, and both of her own presidential campaigns. With the first 2016 Democratic debate coming up tonight, check out tips on how your crew can ball out and take the presidency.

College Hillary
Fun, free, hippie Hillary is equal parts kooky and stern -- but then again it may just be the circus pants. And if you want to channel this look, just know this aesthetic is pure Etsy-thrift vibes, so it's definitely a plan-ahead, make sure you have ample shipping time kind of deal. All you'll need to pull off this look is a Bumpit, a pair of neutral striped bell-bottoms, a '70s-style blouse (cuff is key!) and a pair of octagonal wire-rims (though TBH any geometric wire frames should work).

'90s Skirt Suit Hillary
While her name may be synonymous with pantsuits, a quick Google scan reveals that '90s-era First Lady Hillary tended to stick with knee-grazing skirt suits. To pull this Hillary look off on Halloween, you really only need a few key pieces: a boxy skirt suit (shoulder pads preferable) in royal blue or red, nude pantyhose, big pearl or gold button earrings and some hot rollers and aqua net to give your hair an extra helmet-y oomph. Spend the night alternating between glazed over smiles (campaign Hillary) and annoyed scowls (doomed health care talks and/or Monica Lewinsky scandal Hillary).

White Wine-Chugging Hillary
It was the 1997 White House Press Correspondents Dinner. A baby-faced Jon Stewart was hosting and Bill had just told a groan-worthy joke about the McLaughlin Group, when, at the 30:30 mark, the camera cut to Hillary chugging down the the rest of her wine like she was wrapping up a standard-issue Tinder date. Nothing screams 'get me the fuck out of here' like forced laughter, a pointed blink and a drink-slam. At this moment, I think we all knew Hills could party serious. You'll need a '90s fug-floral dress (sequined is a plus), a glass of white wine, clip-on sparkly earrings, and a blonde wig.

Doomed 2008 Hillary
Fun Fact, this is not the first time Hillary Clinton has run for President. Weird, right? Waaaaaay back in 2008, aka the time before Twitter, Hillary tried to get the nomination. Some other dude got it. She's hoping things will be different this time around. Grab your finest red blazer, black shirt, and prepare to look "positive" while you secretly want to kill the guy who took your rightful nomination. If you need moral support, find someone to dress up as Chelsea!

Bad-Ass Sunglasses Hillary
The photo that's the source of the entire "Texts From Hillary" meme, this might be the most aggressive Hillary, the one most likely to totally destroy you in a bout of international diplomacy. So for your crazy friend, grab a pair of sunglasses, your best turquoise earrings, and, of course, a Blackberry (if you can find one!) and you'll be ready to send extremely intimidating texts as the Secretary of State (more like Secretary of Great, amirite?).

2016 Juggernaut Hillary
Here's the current final form of Hillary -- she's in a little bit of trouble, but still appears to be in the strongest position of any non-incumbent presidential candidate in, well, maybe not ever, but close. Throw on a slightly more interesting, yellow pattern blazer (or, if you can find it, the delightful scarf and metallic coat she wore on BuzzFeed's "Another Round"), get your hair ready to gleam, and amass all of the support the Democratic political establishment has to offer you before heading off to debate Bernie Sanders.