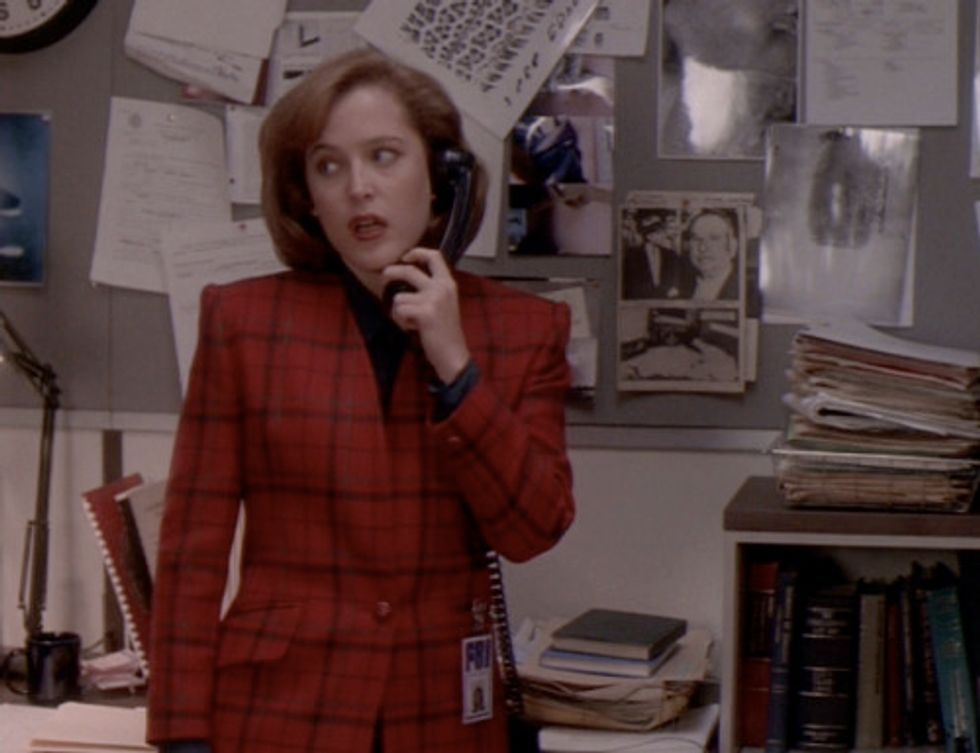 by Maud Deitch
PAPERMAG
Gillian Anderson's Dana Scully -- pop culture's foremost alien huntress -- has terrible style. With long overcoats, oversized ill-fitting suits and a prismatic range of beige tones, Scully is a woman with business to attend to, and no time for fussy outfits. On the X-Files, Scully serves as the stylistic foil to Fox Mulder, her floppy heartthrob of a partner. Although he is not exempt from the fashion of the '90s -- his overcoats are also too long, and his hair often appeared to be styled by riding in a convertible -- Mulder was more notoriously known for his looks. He has what my mom would call, without fail every time we watched the show, a "punim." "Look at that punim!" she would exclaim, every time Mulder's troubled puppy dog face would come into frame. Dana Scully, as big a babe as Mulder, was more focused than her partner -- always the one to bring his wishful theories down to reality -- and her character took herself seriously, dressing the part for emphasis.

Scully's style follows a long line of women wearing menswear (see: '70s-era Diane Keaton in Annie Hall, the rise of the power suit in the '80s) but she took it one step further. By the '90s, the power suit was seen on many protagonists of cop shows, crime procedurals, and yes, sci-fi FBI dramas, but it often got an unrealistic dose of Clinton Era sex appeal: blazers were paired with cleavage-baring tops or incredibly short skirts (Ally McBeal's skirts probably got just about the same amount of screen time as Calista Flockhart herself). Scully's blazers, on the other hand, only revealed a crewneck t-shirt or some absurdly collared blouse, on her dressier days.

Admittedly, Scully's over sized dusters were sometimes less of a reprieve from the impractical tight suits found elsewhere on the network TV landscape and more of a necessity. Gillian Anderson was pregnant in the beginning of X-Files' second season, and hiding her growing belly had an obvious and sometimes ridiculous effect on the show's sartorial situation. When there wasn't a large object placed in front of her, a massive coat or some artfully placed buttons on a knee-length blazer would do the trick. In episode one of season two, Scully wears a pinkish beige topcoat so huge and dowdy that it makes her entire body appear mono-sized and entirely swallowed, in an attempt to take the focus away from the one part of her body that is actually large (because there's a baby in it!).


In most cases, Scully's un-styled style felt like a deliberate character choice. Like Fran Lebowitz explains, in a recent interview with Elle, she wouldn't give Hilary Clinton a citation for her poor fashion choices because Clinton "has no style, zero." Her lack of style makes her exempt from Lebowitz's discerning, ruthlessly critical eye ("yoga pants are ruining women" is the pull quote in the headline of the interview), because she doesn't care, at all. While there's freedom and power in fashion experimentation, there might be just as much when style is an afterthought. Scully is so relentlessly drab, that in the negative space left by all that beige there is the sense that everything of value is happening under the surface. She can shoot a gun, autopsy a corpse, solve a mystery, not in spite of her femininity and not because of it -- her ability is entirely separate from her gender.

Scully's unfashionable fashion also added additional emotional weight to the subplot that carried the show perhaps more than the actual mysteries: the romance between her and Mulder. The two had obvious, electric, insane chemistry, and the consummation of their obvious love for one another was always just out of reach. The fact that their relationship was built on more than Mulder lusting after Scully's blazer cleavage made their love seem like one worth waiting for, which it had to be if viewers were going to make it through nine seasons. Sure, there were bumps in the road, like when Scully went to find the guy whose tattoo made him go crazy and ended up with one herself ("Never Again," season 4, episode 13), but viewers always knew the two would find each other in the end.

By the end of the show, Scully's overcoats had gotten shorter, her hair better, and her blazers single-breasted. She slowly adapted to the changing styles of the day, and by 2002 she had adopted a healthy love of black. Was it the '90s coming to an end that did it? If Fran Lebowitz is to be believed, a woman who cares cannot be forgiven for her fashion mistakes, but one who has other things to deal with, like a potential future presidential candidate or a woman trying to prove that aliens are real, can wear whatever she wants. What does that mean outside of the '90s -- one of the oddest, most unique sartorial decades in recent history? In 2015 we can look back at all those earth tones, all those extra yards of fabric used to engulf our favorite scientist-slash-FBI agent, as a funny piece of nostalgic ephemera, or we can look forward, as the X-Files remake comes upon us, and wonder, what, in this day and age, would Scully wear?