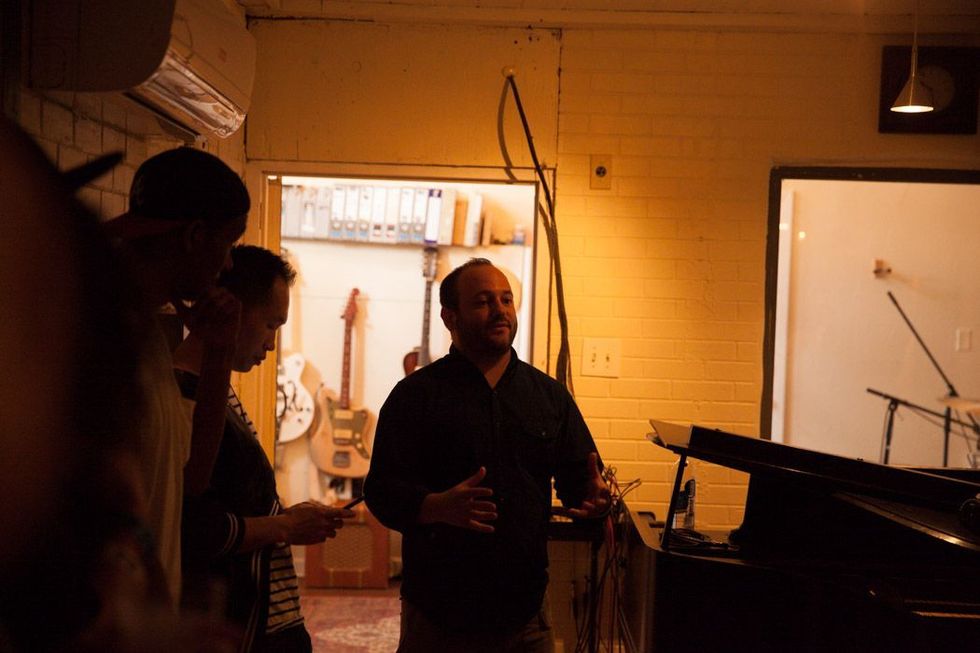 by Gabby Bess
PAPERMAG
It's hard to believe when a brand is doing a genuinely good thing. It was just two weeks ago that the band Ex Cops shed a harsh light on McDonald's efforts to put together a SXSW showcase. The band alleged that McDonald's had asked the indie-pop outfit to play the show for free, in exchange for a nebulous promise of "exposure." In a Facebook open letter, the Ex Cops blasted McDonalds and the billion dollar corporate entities that are trying to partner with bands in a bid for relevancy, but at the same time can't manage to budget an artist's fee. "It is a horrifying and gross reality when one sees the true nature of corporations and their pathetic attempts to achieve relevance with millennials," wrote Ex Cops. Attempts like these, I suppose.

In the end, McDonald's responded to Ex Cops' open letter with the decision to compensate all artists who agreed to play the showcase. The fast food chain told Billboard, "SXSW started as a conference and festival for the music industry, related press and up-and-coming musicians bringing the community together to showcase their talents... To further support these artists, all bands performing at our showcase will be compensated."

After McDonald's issued that statement, Ex Cops came out as thrilled for the artists that ended up participating in the showcase and all seemed well. But down in Austin, Texas, passing by McDonald's tent -- somehow already faded -- and its weird, greasy smell, their attempt at "cool" seemed to fall flat. Brand presences are everywhere at SXSW, but McDonald's bastion still managed to look out of place, like a ghost town. A similar feeling: walking from the hotel to The Fader Fort presented by Converse, I overheard someone say, "They should do something in this courtyard," as they walked by a business park that was shockingly devoid of SXSW fare. "A Merrill Lynch showcase," they joked, passing the financial firm.

Jed Lewis, Converse's Global Music Marketing Director
If you traveled further, just past the dilapidated, french fry enclosure that was the McDonald's tent, across the train tracks, you'd find yourself in a thoroughly different atmosphere -- the Fader Fort presented by Converse. Here, performers like Chance the Rapper, Shamir, Bleachers and even Miley Cyrus would take the stage throughout the week. Converse's presence stretched beyond The Fader Fort to Thrasher's Death Match Showcase and to a quiet, partly residential side street, where Converse brought their pop-up recording studio for the fourth year in a row. Offering free studio time to bands that apply and are accepted to the program, the Converse Rubber Tracks initiative started back in July 2011 with a permanent, 5,200 sq. ft. studio in Brooklyn. To date, over 1,000 bands have come through the Williamsburg outpost.

The pop-up version at SXSW provides the same opportunities to local Austin bands, making its temporary home at Big Orange. At first glance, this seems great. At second glance, it seems suspicious. Is there really such a thing as a "no strings attached" deal between a band and a corporate brand? With Converse Rubber Tracks, the answer, surprisingly, could be yes. "Converse owes a lot to music. We are who we are today because of music, and we're very lucky and thankful for that. We wanted to give something back. The music community, especially emerging artists, they could use our help," Jed Lewis, Converse's Global Music Marketing Director, explains. While some brands might trade off the cachÃ© that partnering with the right band can bring, Converse frames the ask differently. It's not what you can do for Converse. It's what Converse can do for you. Preternaturally on the feet of your favorite bands, Converse is, ostensibly, already cool.

Inside the Converse Rubber Tracks pop-up studio at SXSW
Acknowledging that "there's lots of ways that you can record an album in your basement or bedroom" Converse still sees the value in legit studio time and linking up emerging artists with professional producers. Not only do the artists get to record for free, but they also retain the sole rights to what they record. A local Austin band called Mother Merey and The Black Dirt is a blues-y, stomp band that first started recording with Converse Rubber Tracks three years ago. They're by no means huge, but they're working artists, playing shows down in Austin and getting ready to go on tour. Before signing on to Rubber Tracks, the three-piece outfit started out on the fringes of SXSW, playing an unaffiliated show at a snow cone shack. They were payed in snow cones. For the band, going from snow cones to being a part of Converse's pop-up studio was "night and day." In addition to working in the CRT studio for their own music, Mother Merey was invited back by Converse this year to record some sounds for Converse's sample library. Comprised of over 10,000 royalty-free samples made by everyone from Converse Rubber Tracks bands to The Roots, the sample library is another off-shoot of the shoe brand's music initiatives.

Another Austin band, The Ghost Wolves, applied for Converse Rubber Tracks through a friend's recommendation. Having recorded a full EP at the studio last year, The Ghost Wolves are enjoying a second year back at the Austin pop-up. In their retelling of working and recording with Converse, words like "awesome" and "fun" kept popping up. If there's one thing to be said about the Rubber Tracks program, it's that everyone involved seems to genuinely love it, no matter how hard you prod for a cynical answer. "I don't really buy into brands," one of the members of Mother Merey offered up. "But the thing is, I have such a loyalty to Converse at this point. It's the community and passion that everyone has here that brings me back." For Converse, surprisingly or not, it really is about music and musicians. The good PR just follows.