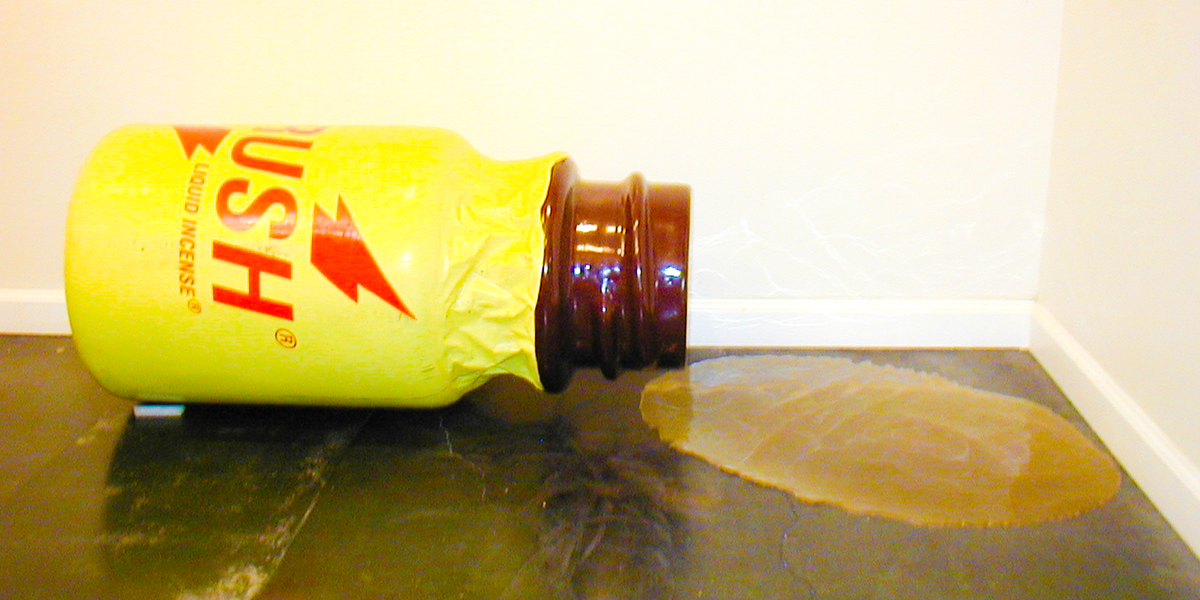 When Carlye Packer reconnected with an old friend, whose Palm Springs house is a shade of pastel pink (much like the ones in Tim Burton's Edward Scissorhands), the curator knew she wanted to transform it into a pop-up art gallery. The 1950's midcentury-style vacation spot is rented out seasonally, but vacant in the impossible August heat, making the perfection opportunity — and challenge — to bring more than 40 artists, designers and artisans into the space.

Aptly titled House Parté, Packer's show started with John Waters, who agreed to participate — most notably with a giant spilled poppers bottle placed on the kitchen floor and a massive La Mer jar in the bedroom. Much like his work, which ever-so-slightly bends reality through a twisted queer perspective, the California home is like stepping inside an acid trip, with different rooms that replace traditional furniture for similar art pieces — whether in context or shape. Someone, in theory, could live here, but who?

The living room's coffee table is by fashion designer Victor Barragán (and called "Bolas," or "Balls" in English). The bedrooms have bed-shaped sculptures, only one features giant swan heads for posts and the other has colorful plastic flowers growing from a plexiglass base. In one closet you'll find ceramic shoe sculptures by Patrick Jackson and seats are upholstered with prints by tattoo artist Manuela Sosa Soto. Walls, of course, are covered in canvases, but little surprises can be discovered in every nook and cranny.

After making the drive out to House Parté, currently open to private showings through the end of August, PAPER caught up with Packer to talk about her latest project. "I always like a challenge because obstacles or limitations present possibilities," she says, and this group show is a perfect example. To RSVP for an appointment, send an email to [email protected]

What's your personal relationship with this space?

The house is owned by a friend of mine who I sold some work to a few years ago vis-à-vis my gallery at the time, called Club Pro Los Angeles, and was reintroduced to them relatively recently. The house is rented out seasonally and since August triple degree sucks, though I personally enjoy the heat, they said I should do a show there since it would be empty anyways. I said, "It's a very John Waters house," and he said he knew John and would intro me. John agreed and it pretty much snowballed from there.

How did the house environment and Palm Springs impact the way you approached curation?

With any space that's not a traditional gallery, you are forced to think more about how the works engage with their environment, not just how they look or interact with the other works being presented. Within a house, there are certain standard things like kitchens or bathrooms that influence the curation or particular things like alcoves, closets, window placement that confine and dictate where you can place things. Certain things end up sort of "belonging" somewhere because they fit or perfectly cover up a weird wall outlet or something.

But these "confines" are also the type of things/ places that are fun to mess with, [like] putting Isabelle Albuquerque's reverse table piece in the dining room (sort of referencing Allen Jones' table with a female underneath the glass). So there's a freedom of curating within a house because you are redesigning/ restructuring the interior, how someone moves throughout the space or thinks about how they move throughout their own space. At the end of the day, it becomes as much about interior design as it is about curation — thinking about how things actually look and feel when you live with them.

[Regarding] Palm Springs, there were certain moments where an artist or work seemed "perfect" for Palm Springs. [I don't know] what I meant by it then, but somehow it made sense.

Moving throughout the house, the spaces felt like abstractions of traditional "home" interior design: Rugs, bed frames, shoes in closets. Was that intentional?

Yes, definitely, I think we had to merge home elements into curation to make it believable. I was interested in things that functioned like they were supposed to, [like] Ariana Papademetropoulos' [swan] bed, as well as things that would suspend disbelief, [like] the "bed" sculpture made by Gabriele Ruiz. I also think the setting of a "home" influenced what artists wanted to exhibit or make specifically for the show.

Filling an entire home with intentional work is ambitious. Where did you start your process? With one piece or was it more macro?

It started with John [Waters], a super long list of artists and a lot of ideas being thrown around. Many friends and colleagues helped too, with things like artist intros, picking up paintings in the middle of the night, planning the opening party. The whole endeavor was/ is super ambitious, but definitely worth it. I think a lot of new connections and friendships were formed at the opening, especially between the artists. It was really special, everyone was happy to be there.

What is the through line between this group of artists' work? Is that connection important to you as something to ground the entire space?

In reality, the fact that they are all in the house is the only overarching connector. There's no theme or rhyme or reason as to why each piece found its way into the home necessarily, but in the end it somehow all makes sense. Many of these artists do know each other personally or via the internet minus [Sigmar] Polke or John [Waters], but many pay homage to those iconoclasts in the show — George Rouy to Polke, Gabriele Ruiz to John, and many of the other artists operate or have come from the underground, so it ended up feeling like some sort of fucked up sleepover camp with people you kinda knew, but now you love and are pen pals.

How do you think John Waters' work specifically brought the space to life?

John supersized the house, physically — like all his pieces are really big — and metaphorically because he made the show feel sort of legendary from the offset.

You're immediately greeted when you walk in by a giant piece from Eric Scott Tawiah. Was that placement purposeful?

I mean, the piece is very Palm Springs for whatever reason and a cute celebration of friendship, but if I remember correctly that was the only wall it fit on [laughs]. I'm into the texture element of his work. Eric works out of the artist Amoako Boafo's studio and just had a great show that sold out.

The different rooms almost act as separate galleries with different feelings and experiences. From your perspective, what differentiates or unites them?

We had nicknames for each room while installing and the nicknames for the rooms would change throughout the day depending on what ended up there. We would say things like, "That goes in the scary room," which is the room after the playroom, which yesterday we called the "sculpture garden," and before that the "sexy dungeon." So yes, each room ended up having a different sort of feeling.

The show kicked off with a real-life house party. Do you consider it an extension of the show, considering its title, House Parté?

Yes, definitely an extension. The best part of organizing something like a group show or an event is that you get to introduce people from various places and practices who might not have been in each other's orbit previously. Or do something like put Manuela Sosa Soto's first furniture piece in a context to a Haas Brothers' beast, Jan Gatewood painting or Henry Taylor drawing. And by having an opening for an exhibition at a house, it by default becomes a house party. But we definitely wanted to lean into that feeling.

My friend that helped with the afterparty comes from a music background and is good with making controlled chaos. There were local Heyday burgers, cotton candy, swimming, music sets by Danny Fuentes of Lethal Amounts and by Hudson Mohawke. It was a combo of Palm Springs locals who saw it on the cable news channel, friends, family and artists from Los Angeles and abroad, old school collectors like Donna MacMillan and the new Director of the Palm Springs Museum Adam Lerner, but also pop culture critic Patia, musician Empress Of, plus other curators, randoms, etc. — pretty wild, actually.

At large, how do you consider House Parté a strong example of your work as a curator?

I always like a challenge because obstacles or limitations present possibilities I didn't necessarily see at first and I like doing things differently, so in that way yes it is a good example. Plus, I have done similar-esque projects in the past, so it is not my first time doing a house show and definitely won't be the last.