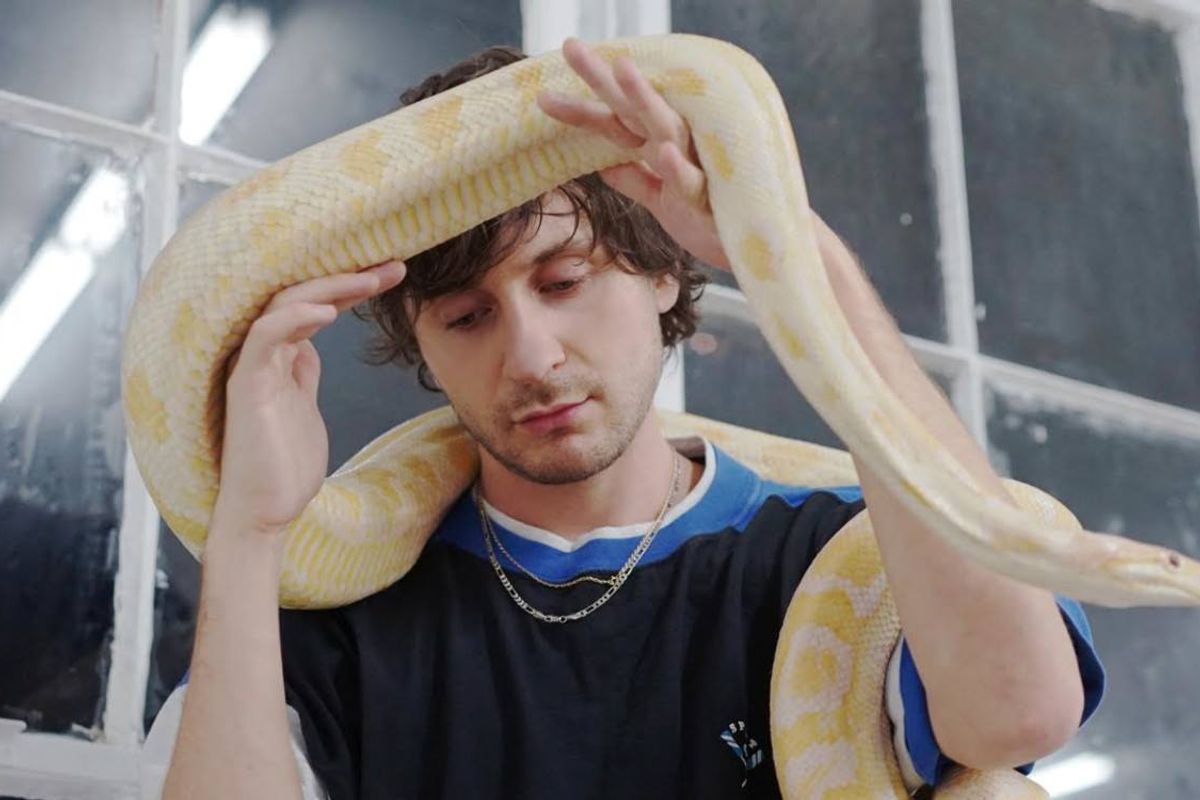 Listen to a new track, "The Life of a Goldfish" from The Melody of Dust.

It's not often you find an artist whose oeuvre of work is so intuitive and atmospheric that it has the ability to ease you into a fantasy world of their own careful creation — however, this is something Hot Sugar (aka Nick Koenig) is particularly adept at doing.

That said, his production work is (counterintuitively) never just about sound. Instead, it's an all-encompassing visceral experience that has a strange way of eliciting a nostalgic longing for situations you've actually never encountered. So it only feels right that Koenig's latest dive into the deepest corners of his listeners' psyches is The Melody of Dust, a 13-track album that serves as the gateway to a much larger, more complex world brought to life via virtual reality.

As such, the word "album" in this case feels limiting, especially since The Melody of Dust breaks new ground as the first musical release whose true contents are exclusive to VR. In reality (or at least the supercomputer-generated one Koenig has created), the full album is 87 tracks, all of which are meant to seamlessly blend together based on your actions within the virtual reality world.

But how exactly does one decide to make an album of this scope? Let alone execute it? In Koenig's case, what started as an idea for a movie was put aside after the Viacom rep he was pitching to introduced him to the company's brand new VR division, Viacom NEXT. "I realized there were so many other dynamic points to VR," Koenig said. "The sensory control being the most important one. So I came up with an idea for VR based on that sort of thing."

What resulted a year-and-a-half later was The Melody of Dust, an immersive, interactive experience that invites the viewer to create their own Hot Sugar track by throwing objects — think roses, switchblades, etc. — scattered around a room straight out of one of his videos into a tornado. Within this scenario, you are given the ability to trigger one of the aforementioned 87 songs via different combinations of objects thrown into the vortex (in our premiere's case, it's a dove, medusa bust and nail polish).

It's a process that's reflective of his theory of associative music, "a modernized branch of musique concrete" that champions the idea that any object in the universe is an instrument whether you know how to play it or not ("it makes a sound and therefore you can turn it into music"). But it is also a unique way of connecting with listeners who are able to participate by providing the elements in the creation of these compositions.

"In a way, they can hear the origins of the song in the objects that they picked up, so it kind of communicates that message even more," Koenig explained. "When you shake the dove, you hear the sound of a dove. Then you throw it into the tornado, that melody has the voice of that dove hitting different notes. That was the original idea, to romanticize what I'm trying to do with music by turning it into a fantasy game."

That said, accessibility is still an issue — seeing as how there are only about 100,000 of these VR units currently in existence — but it's one that's Koenig feels is worth it in favor of creating "something new that hopefully will stand the test of time". Or at least something that will eventually reveal itself as the ultimate participatory experience once commercial VR technology makes it to the masses.

And while Koenig says there are tentative plans for some sort of set-up at future shows, the only public showing currently on the books is at SXSW. That said, if you're not one of the lucky few able to catch the whole set-up IRL, you can still listen to the haunting, hazy-hued dream that is "The Life of a Goldfish" below, exclusive to PAPER.

The Melody of Dust is out on March 31st via Steam, Spotify and vinyl.

The Melody of DustVR experience is on Tuesday, March 14 from 11am-6pm at the JM Marriott Salon 5 in Austin, Texas.