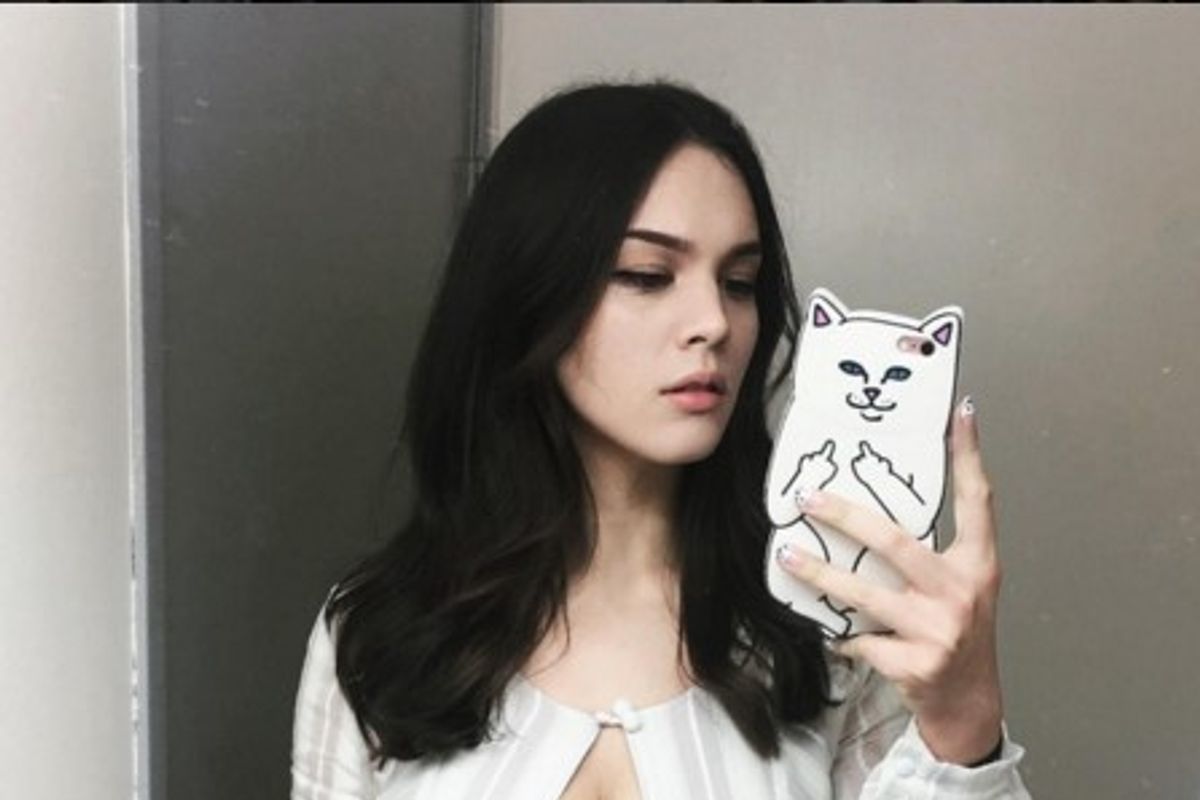 If you're like every other member of the Internet, your Instagram feed is littered with art-directed, professional-quality snaps of adorable pets, personalities like Marnie the Dog or Lil Bub who have reached dizzying levels of social media fame. While they're cute as hell, these pets lack the skills (and the opposable thumbs) to curate their Instagram presence. Who are the humans behind these fabulous fur friends? Turns out many of the owners obsessively recording their adorable, super-social-media pets are fascinating, cool, and pretty damn fine in their own right--but with nowhere near the same recognition. Who knew Pudge The Cat's owner was a total babe or Princess Cheeto's dad was a bearded hottie? Scroll down to see a couple owners of Instagram's greatest viral pets who are pretty easy on the eyes themselves.

Kady Lone on Instagram: “The dress I was going to wear to Cat Art Show never made it out of @jlurves bathroom 😪 #myFLL #lordnermal”

This is Pudge the Cat's mama, Kady Lone, on her way to Los Angele's Cat Art Show, a meditation and celebration of the feline form. The Minneapolis-based, cat-centric entrepreneur who previously worked full-time in graphic design, is now employed running a business based on Pudge's rising Internet star. As a work-from-home graphic designer, Kady has landed partnerships with Purina, paid endorsements, and distributes merchandise featuring Pudge's sweet face.

Mosier is classically cool—and by that we mean rocking tats, Birks, and one the cutest pugs ever: Doug. Mosier went to school for music business and worked as an assistant manager for a record label before hitting early retirement and becoming a full-time momager to Doug. Her publicist skills come in handy, as Doug has 1.7 million followers, a serious website for merch, and a coffee-table photo book, Doug the Pug: The King of Pop Culture, that will be out this fall.

Los Angeles-based stylist and creative producer Julia Wester helms the account of famous frenchie Tuna in tandem with her husband, Dave. Her magnificent styling skills for lifestyle and design studio Oh Joy! translates nicely to capturing the picturesque life of Tuna, frequently accompanied by Wester's adorable daughter. Pups and babies: Tugging at the strings of our hearts one Instagram photo at a time.

Andrew Knapp on Instagram: “Alone on V Day? Suppress your loneliness and adopt a dog! 😉😁😢🍕”

Knapp is a clever photographer with a mission: Go Find Momo. Taking some tips from an infamous puzzle game featuring a dude with a red beanie, Knapp photographs his adorable Border Collie, Momo, "hiding" everywhere from dandelion fields to geometric pattern rugs. The blue-eyed, bearded Canadian has turned his pet's penchant for hiding and their nomadic lifestyle--they live out of a yellow VW bus--into two "I spy" style books, with a third on the way.

Steph & The Pointer Brothers on Instagram: “Getting a kiss from my ginger ❤️ #KissAGingerDay”

British Colombia-based photographer Steph McCombie rescued her two pups, Gus and Travis, and began documenting their lives on Instagram as "The Pointer Brothers." The duo was an Instagram favorite for their dynamic and well-dressed portraits until Travis passed away from cancer last year. McCombie has continued the account, with Gus joined by his new brother, a vizla named Alfie, on their adventures, using the exquisite topography of B.C. as her backdrop.

Not just another creative dude with a cat franchise, Hugo Martinez creates content for brands such as Target, Steve Madden, Purina--in addition to maintaining his beloved Princess Cheeto's social media universe. With one look at Martinez's personal Instagram, it's easy to see how he has made Cheeto a worldwide star. By day, he works as a photographer assistant to renowned fashion photographer, David LaChappelle, and by night, he composes the lively, colorful world of Cheeto.

"Crazy Avey" is a full-fledged multi-hyphenate. Writer, producer, actor, and content creator of Colonel Meow's famed Instagram page, Avey chronicled the life and times of her pedigreed pet. After the sudden death of OG Colonel Meow in 2014, Avey mourned the loss of her feline love by finding a new object of affection to display: Papa Puff Pants. In addition to narrating the life of Puff, Avey writes sketch comedy, and performs at UCB in Los Angeles.