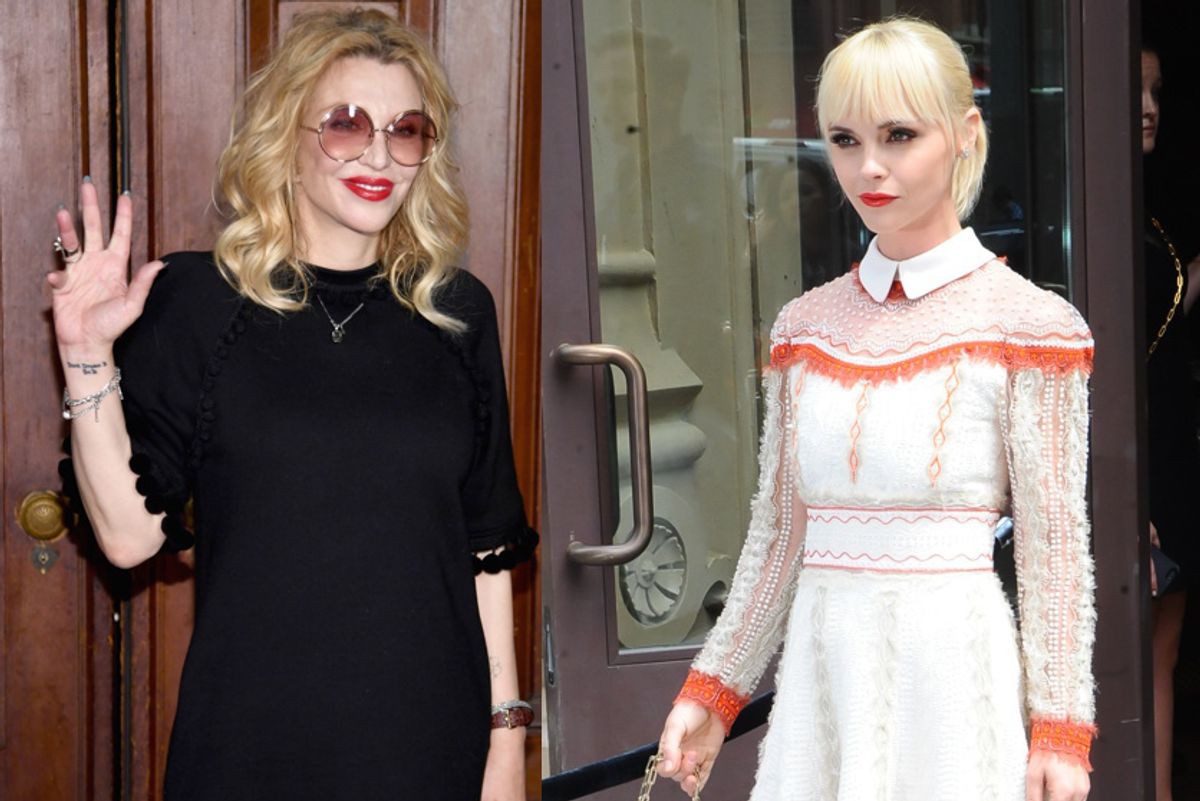 I've written about my most awkward encounters with celebs over the years, but let's take it a step beyond that and go for horrible. Here are some of the ickiest interspecies moments (some of which were surely my own damned fault):

Back in the day, I spotted the often troubled Sinead O'Connor out on the scene and cornered her to say that her "Nothing Compares 2 U" video was intense and riveting. "What were you thinking about when filming that, to get that effect?" I wondered, innocently. "I'm not thinking about it now," she replied.

I had written a huge cover story about Christina Ricci, praising her for not being a cookie cutter ingenue and for daring to be a tiny bit pudgy and different. When I caught up with Ricci again at an event, she looked a lot more svelte, designer-y, and, dare I say, generic. "What happened?" I asked her. "Well, you've lost weight too!" she responded, sensibly.

On the phone with Famke Janssen (GoldenEye, X-Men), I started talking about her large feet, which had come up plain as day in a google search. I'd talked to Famke before and found her smart and appealing. This time, I started telling her about my own oversized footsies and how hard it was to get proper shoes. I babbled on for a while, insanely thinking we were bonding. "Why are we talking about this?" responded Janssen, annoyed. I vowed to never talk about myself again—that much—in an interview, especially when it relates to the subject's physical traits.

French screen legend Jeanne Moreau (who died in July) was in a movie about Marguerite Duras and had also directed a movie based on one of Duras' works. She was talking to reporter at my table at a luncheon some years ago when the reporter leaned over and asked me to join their conversation. (She must have been bored and wanted a lifeline.) I had no idea which Duras movie they were talking about since I had been chatting with someone else the whole time, and frankly, I didn't really feel like being dragged into this conversation at all. But to be polite and to help out the writer, I ventured a guess and made a smiling comment about it. Moreau—who had been charming when I did a one-on-one with her years earlier--ridiculously bristled. "NO!!!!" she shrieked, out of control. "WE'RE NOT TALKING ABOUT THAT FILM!!!!" They were talking about the other one!!!! I didn't give a shit about either one of them, I was just being nice enough to go along with a conversation that obviously the reporter was tired of shouldering alone. As the Gallic diva kept railing without a filter, I turned my back on her, only to have her seem to realize she'd misstepped and flutter her eyelashes while cooing, "Perhaps we should start again?" Um, no….

Swedish bombshell Anita Ekberg was even worse when I met and dined with her in 1999. She was patronizing, dismissive, and downright mean. The former Fellini star distrusts the press, no matter what you say or do. Everything that came out of my mouth was wrong to her. Every aspect of the evening was another excuse for the former siren to bark orders at publicists. At one point, I offered Ekberg a beautiful drawing I'd brought of her from La Dolce Vita. She looked at it like it was a pile of manure and blatantly refused it. Ever since our encounter, I call her "Anita Yeck-berg".

Wait, there's more: I love Marlo Thomas. I loved her in the sitcom That Girl and in almost everything else. But one over-the-top scream she let out in some TV movie tickled a friend and I, and I made gleeful fun of it in my column. Later on, when I was introduced to Marlo at a party, she disarmed me with her opening salvo: "You don't like me, but I like you." "Oh, no, I adore you," I replied, sincere but flustered. I use her line all the time now.

This one bears repeating (especially since this list is heavily on the female side): At a dinner for some movie very few people cared about, I was brought to a table to have a quick interview with Sam Shepard, who was in the film. (Sadly, Shepard died last month.) I nervously asked the renowned playwright/actor something about how he prepared for the role, trying to act like I cared. He glowered and responded, "You call that a question?" "You call that an answer?" I shot back, and he almost cracked a half smile in appreciation, but I was too busy abandoning the table to fully notice.

I had requested an interview with Janeane Garofalo, whom I'd talked to before and enjoyed. When she answered the phone, I started by quipping, "We've got to stop meeting like this." Janeane took it seriously, as if I was really saying we should stop communicating. She replied, "Well, you're the one who requested the interview." I stuttered and stammered, trying to explain that "We've got to stop meeting like this" is a joke from old comedy sketches—usually about adulterous couples—and I was just invoking it for a giggle. I vowed to stop using really old references—or at least try to—for a while.

At parties, Courtney Love has repeatedly come up to me and babbled entertainingly. Figuring we had some kind of social bond going (she had once even praised me mid-concert and dedicated the show to me), I contacted her publicist, asking if I could interview Courtney on the record. "What is the angle?" they wanted to know, engaging in that perverse publicist's mission to try to stop publicity from happening. "I would ask about her tour, her music, and anything else she wants to talk about," I responded, feeling there was no way they could have any problem with that. Somehow they did, and they never set up the interview. So I'll just wait till the next party.

In 2013, I interviewed the great Joan Collins. I'd spoken to her before—even once in her luxurious Beverly Hills home--but I didn't want to stop meeting like this. During the conversation, I commented on a fun and trashy 1975 thriller Joan made called The Devil Within Her. The diva bristled, "What do you mean by 'trashy?'" Um, let's see, the flick involves Joan as a nightclub stripper who fends off a rape by a carnival little-person, who then puts a spell on her, making her pregnant with the love child of Satan. Trashy much? Rather than re-tell the plot to her, I simply assured her that "trashy" is not a bad word to me.

And finally, a couple of great divas of Broadway and cabaret took turns torturing me. In 1987, a publicist ushered me backstage to meet the timelessly talented Eartha Kitt, moments before she was about to give a performance. And she gave a performance all right. Rather than cutely meow at me, the eternal kitten roared her disapproval at my question and in, fact, my being there at all. (Interestingly, years later, I interviewed Eartha onstage at a gay bar and she was sweet and pretty much shy!) Even worse was my onstage interview with Elaine Stritch in 2014. Backstage, the award winner emerged from the elevator in a wheelchair, literally screaming about how unhappy she was. When I started the Q&A by posing a question, she yelped, "Oh, no! You're not going to be the first!" The first one to talk? But I was the moderator. Were we supposed to just sit there in silence? Actually, I wish we had because almost every question I asked—no matter how fawning the setup—was greeted with quick words of evasion or disdain. Halfway through, Stritch seemed to finally realize I was there to make her look good, and Jeanne Moreau-style, she started coquettishly flattering me and saying we should have lunch. There are several reasons why that never happened. But I'm man enough to realize that Stritch was frail and about to retire, plus she was overworked promoting her documentary—and besides, her nightmarish behavior made for great copy. So bring on the horrible encounters!