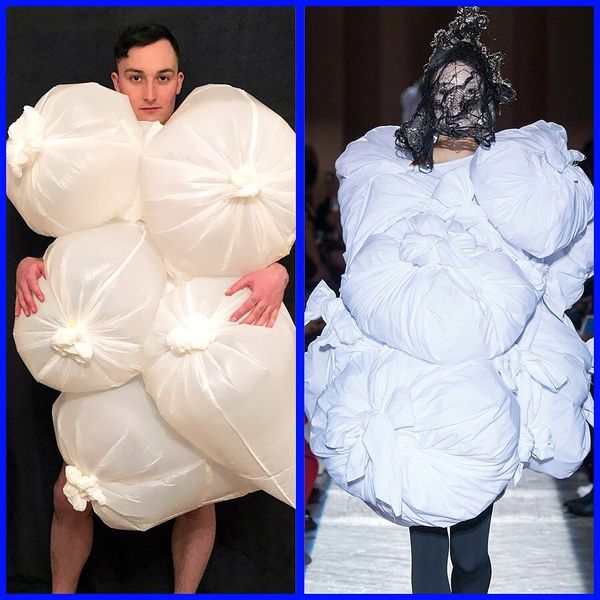 Thanks to a #HomeCouture hashtag making the rounds on Instagram, people are providing some much-needed comic relief in the form of avant-garde fashion. London-based fashion journalist, illustrator and self-described meme lord George Serventi (@skipdin) started the trend while inviting users to submit their own DIY interpretations of runway looks.

"The idea is that Quarantine Queens across the world should doll themselves up, Cinderella style, with scouring pad ball gowns, toilet roll palazzo pants and saucepan fascinators," he tells PAPER. "People are getting pretty creative with their bedding; I guess most of us are spending the 9-5 under a duvet so it's easy to find inspiration between the sheets!"

So far, Serventi has used things like pink tissue paper to recreate Molly Goddard's tulle confections and blow-up bin bags for a Comme des Garcons moment. "Materials regular people have lying around the house like tin foil, bin bags, newspaper and cellophane work well (think Alexander McQueen SS95)," he says. "Though so do pot noodles, broken plates and bin bags!" In other words, the sky is truly the limit.