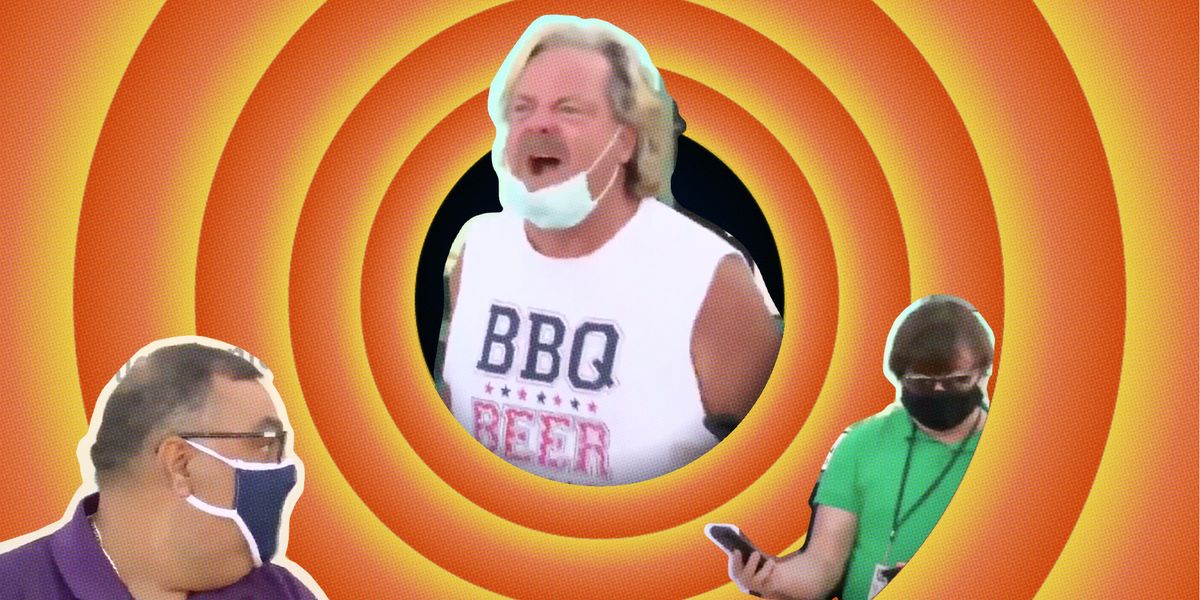 This 'BBQ Beer Freedom' Meme Is Sending Us Right Now

While the nation anxiously awaits the remaining ballots to be counted, settling in for an excruciating wait that promises to drag on for several more days, if not weeks, one thing remains clear: tensions are running high in the Trump camp. So, true to form, 45 riled up his base with false claims of a stolen election, resulting in his supporters attempting to storm ballot counting facilities in the battleground states of Arizona and Michigan.

It also led one man to interrupt a Nevada press conference, shouting "the Biden crime family is stealing the election, the media is covering it up" as local officials looked on unsure how to react before he eventually just moved on. Naturally, a video of the moment went viral with social media equating the man's "BBQ. BEER. FREEDOM." tank as being the MAGA equivalent of "Live, Laugh, Love" and, like every other aspect of this prolonged election, memeing the hell out it.

The unhinged rant proved to be too irresistible even to experimental electronic musician, Holly Herndon, who shared her own edit of the clip yesterday. Adding rising layers of autotune and vocal processing until the whole thing crescendos into a helium saturated finish, there's something weirdly sublime about Herndon's treatment, if somewhat indescribable as to how.

"If I'm honest it's not that deep. I think like everyone I've been glued to my screen following the election, and am feeling heavy and a little delirious from how serious and dragged out this whole process has been," Herndon tells PAPER. "Then in the middle of a serious conversation about vote counts some random guy appears out of nowhere shouting nonsense and the absurdity of it all tickled me. I worked on it for about 15 minutes and thought other people might find it funny."

And find it funny they did. It didn't take long before Herndon's edit was racking up thousands of retweets and likes taking on a life of its own with people churning out their own remixes and reworks. "I guess the main and maybe boring observation is that you know it's a meme when it goes so far out of your network or context that it's not really yours anymore!" Herndon says. "I've seen some really funny permutations of it, I like the grindcore one a lot. I also learned a lot about 100 gecs as my mentions have been full of references to that band, which was a fun discovery!"

However, Herndon is no stranger to being at the center of a meme. In 2015, a photo from Oya Festival in Norway of a stage's LED wall lit up with the words, "we are never booking you again," made the rounds with many speculating and joking about what artist could have possibly pissed off the promoters enough to warrant the rude message. In actuality, the message was written by Herndon's partner, Mat Dryhurst, after her computer had overheated on stage as a wry joke about their own misfortune. "It's fun to see these things divorced from any context," Herndon muses, "maybe the only alarming part is the thought that something like this might be my most well known musical contribution lol. That is terrifying!"

Stream Holly Herndon's most recent album, PROTO, via 4AD below.