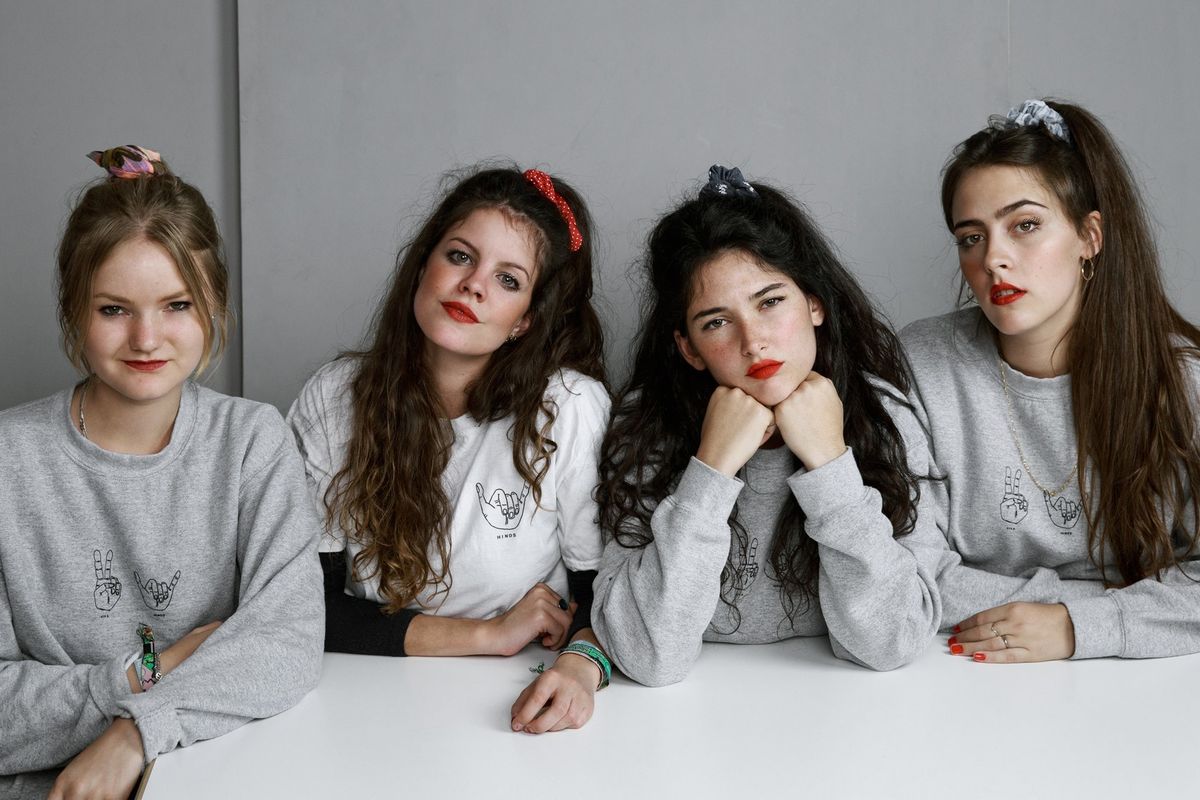 With Their Debut Album, Hinds Reclaims The Garage For The Girls

Madrid might have a thriving garage rock scene, but the Spanish city faces the same issue that plagues the entire music industry: It's still very much a boy's club. To correct this horrid imbalance, enter Hinds, a plucky four-piece who spool out the kind of lo-fi, ramshackle rock that made Ty Segall and the Black Lips internationally-beloved. While the girls can namecheck countless acts like these as sonic influences, it's their lyrical grounding in the feminine perspective that makes their take on indie rock feel fresh and novel, even if they happened upon the stage almost by accident. "I wish we had female idols," vocalist Carlotta Cosials laments when I meet the group for coffee and bagels in a cozy Midtown office. They're visiting New York for a brief press trip several months before their debut album Leave Me Alone is released via the New York-based label Mom + Pop. "But no, we don't have a girl band that we are crazy over that we admire. They are all boy bands."

Singer-guitarists Carlotta Cosials and Ana García Perrote were fixtures in the music scene of their Spanish hometown; the two friends hung out with plenty of musicians and even dated a few. But things changed during a bout of boredom on a trip to the south of Spain in 2011.

"It was so random, it was nothing like we planned," García Perrote says. "We were just friends and girlfriends of the guys that played, and it wasn't in our minds that we could grab a guitar and do something. It just happened. We were bored on a trip and pulled out guitars, started playing and teaching each other. Then we wondered if maybe we should play and sing together." After that initial question, the girls began to answer it by developing Hinds in fits and starts over the next few years. The band was born as a duo playfully called Lofi Lofi, then assumed the name Deers, until a legal spat prompted one last name change. "We sort of looked for our own sound," García Perrote remembers. "We didn't have much, only two guitars and two voices. Neither of us were better than the other. So we started doing cover songs. We built a cover of 'It Ain't Me Babe' that we really enjoyed playing."

As they continued to refine their sound, the girls retained their characteristic call-and-response vocal style, which is found all over the twelve tracks on Leave Me Alone. In 2013, they graduated from cover songs and began writing their own material. The group also fleshed out their lineup, convincing their friend and guitarist Ade Martín to pick up the bass, and enlistening Holland-born drummer Amber Grimbergen, who they met through the internet. Hinds had their first official show in 2014 and began working on their debut album exactly one year later. After releasing several splits, singles, and an EP playfully called The Very Best Of Hinds So Far last summer, they recorded Leave Me Alone with production help from Diego García, a friend from another Madrid band called the Parrots.

As the title suggests, it's chock full of songs that grapple with heartache, loneliness and disappointment. Even if Leave Me Alone is decidedly blue overall, the girls combine Lou Reed-worthy angst with bright and sunny garage riffs. "Chili Town," an early single, is an exception to the rule channeling optimism ("I am flirting with this guy just to pretend I'm fine/Saliva mixed with lies/My laugh is oversized/Forever yours, right") that Cosials said was hard-fought.


"On most of the songs on the record we're asking for things and begging," she said. "When writing 'Chili Town," I suddenly felt like I wanted to have one song where I'm the one with the power — I'm stealing his cigars, I'm in charge. When you listen to rock and roll, no one is used to hearing lyrics like that from a girl, especially since most of these songs weren't written by girls. For this song, we wanted to harness that kind of dominating energy and have it coming from a female perspective."

That fierce energy also spills into other album standouts, like "And I Will Send Your Flowers Back" and "I'll Be Your Man," that deal with the same kind of complicated frustrations from the still-infrequently heard perspective of a female narrator. And despite the fact that Spanish is the first language for all the band members, every song on the album save one is sung in English. The accessibility of the language is part of what drives that choice, they said, as well as aesthetic preference.

"I have a hard time singing garage music in Spanish," García Perrote explains. "I find it very cheesy and corny in Spanish. And as we speak about love and things that happen to us it is easy to relate to, because everyone has gone through that. In English, we are getting to express our shit with more people. It makes more sense, and it gives you more satisfaction to have more people understanding them."